War of the Ivories

Is downtown Minneapolis big enough for two dueling-piano bars?
By Jake Anderson
May 11, 2012 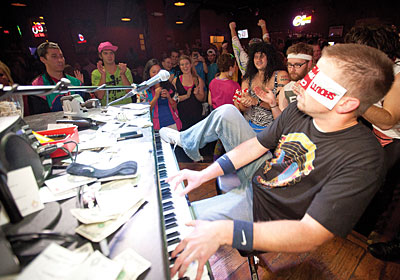 For nearly eight years, the only spot in downtown Minneapolis to watch dueling piano players pound out a Billy Joel ballad was The Shout House. But there’s a new bar in town with smoking ivories.

In December, Howl at the Moon—which operates 13 piano bars nationwide—planted roots at 430 N. First Ave., a stone’s throw from The Shout House in Block E. Its Chicago-based parent, Howl USA, is the “fastest-growing dueling-piano bar operator in the country,” but it has also shuttered several underperforming venues, including one in Scottsdale, Arizona, that was open a mere six months.

Molly Lermon, Howl’s sales and events manager, says weekend attendance at the Minneapolis location has doubled during its first few months. The owners of nearby Brothers Bar and Grill own a stake in the club, but being a chain has tangible benefits. “People say, ‘I’ve been to the one in Houston, I’ve been to the one in Chicago,’ ” Lermon explains. “They like that they know our name, and that they know what to expect when they get here.”

Joe Woods, majority owner of the Minneapolis Shout House, proudly describes his club as “a Minnesota small business.” There are additional locations in California and Arizona, but each is independently owned and operated.

Revenue at Woods’ club has climbed 8 to 12 percent annually since its 2004 inception. It has seen local piano bars come and go, like Little Ditty’s at the Mall of America and a handful of Axel’s Bonfire locations that tried but later dropped the model. (Block E being Block E, it’s worth noting the Shout House’s lease runs through 2014 with two five-year extension options.)

“We’ve been successful during the worst of times, so whatever happens [with Block E], I’m confident that we can continue to grow,” says Woods. “I don’t have plans to go anywhere.”

But can the Warehouse District support two dueling-piano bars? If the weekend lines outside each are any indicator, the answer seems to be “yes.”