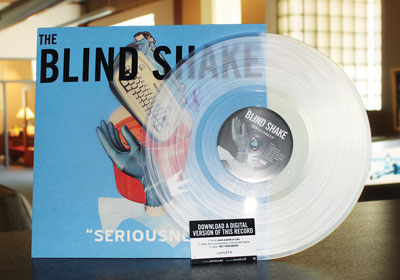 Volna is the founder of Noiseland Industries, a Northeast Minneapolis company that functions something like a general contractor for independent music labels and artists across the country. Noiseland doesn’t operate a recording studio or manufacture CDs; instead, the five-person firm manages the process of getting the music formatted and packaged.

Paradoxically, Volna began to hear the tune change for his company in 2006, Noiseland’s strongest year. That year, “we made more CDs than we ever had before,” Volna recalls. “But it was also the first year when people started calling asking for vinyl.” He didn’t pay too much attention at first, because his company was so busy and didn’t have expertise in this allegedly outdated format.

But after 2006, Noiseland saw CD sales starting to slide. At the same time, “the frequency of those calls [for vinyl LPs] just kept increasing to the point that by 2009, it just became apparent that we couldn’t ignore it,” Volna says. “If we were going to remain relevant to our customers, we were going to have to come up with a solution for them.” He saw that Noiseland’s “traditional business was changing, but there were still enormous opportunities, we sensed—I think correctly—in vinyl.” In fact, Volna adds, “vinyl has more than made up for any decline in our CD revenue.”

Billboard reported 40 percent growth for sales of vinyl LPs in 2011, with the number of LPs sold a little under 4 million. That’s a tiny fraction of the total recorded music sales, which included 227 million CDs and 1.27 billion downloads. But as The Economist noted last year, cool bands such as Bon Iver and Arcade Fire have released LP versions of their albums. For Noiseland, vinyl now represents a significant niche business.

The company could pursue that market because of its business model.  “We have more in common with a graphic design agency or a packaging company” than a record business, Volna notes. Since Noiseland isn’t a production house per se, “we’ve always been opportunistic in what we go after.”

Finding a vinyl presser proved to be a challenge. As LPs gave way to CDs in the 1980s, record companies shuttered their vinyl-record plants. Volna says that about eight small, independent companies in the U.S. still make LPs. None had excess capacity. So Noiseland journeyed to Europe and found MPO, a French company with 16 presses and the capability to produce small runs at high quality.

Unlike the LPs of baby boomers’ youth, the current crop is printed in “smaller quantity, but with a higher price point,” Volna says. The packaging also is fancier. Noiseland recently put together a double LP for local rap collective Doomtree that retails for $50. The box that contains the LPs also includes several extras, including a limited-edition T-shirt and a double-sided glossy poster. With fans willing to lay down that kind of do-re-mi for a record, Noiseland and its clients “can be successful selling a thousand,” says Volna, who describes this new wave of LPs as “coffee-table art books for bands.”

Noiseland contracts out the jacket design work to local and international creatives. One of them is Storm Thorgerson, who as a member of British design firm Hipgnosis co-created some of the best-known album covers of the 1970s, including Pink Floyd’s Dark Side of the Moon.

In 2008, Noiseland entered a music market with very different dynamics from vinyl: download cards. “Bands want a physical token, whether it’s a CD, a piece of vinyl, or download card, that they can sell at the show,” Volna notes. Compared to LPs, download cards are cheap; they’re also a fast way for fans to obtain music files for sharing on smartphones. In addition, cards offer musicians a way to sell their music without spending money on packaging, and to sell outside of what Volna calls “the iTunes cabal.” Noiseland has spun off a separate entity, Soundtrax.com, to market download cards.

All told, “we’re seeing growth at both ends,” Volna says: low-cost download cards and high-end LPs. Currently, Volna says, about 20 percent of Noiseland’s business is vinyl; the rest comprises CDs and download cards. He’d like to see each category make up a third of Noiseland’s revenue. Though Volna won’t reveal revenue figures, he does say that the company made about 100,000 LPs last year, and expects to make 400,000 annually by 2014.

“Noiseland is a smaller company, so you get personal attention from start to finish” on a project, Gehring says. That’s especially important on vinyl records, he adds, since producing LPs is more complicated than laser-cutting compact discs.

Volna has ridden the waves of the changing music business for more than 20 years, ever since the University of Minnesota history grad found himself helping bands with behind-the-scenes work, like getting CDs made. “I was given the responsibility of finding out how to get stuff done,” he recalls. “People I didn’t know starting asking me for help. And I realized that there could be a business opportunity.”

Noiseland currently operates inside the former headquarters of the Paul E. Hawkinson Company, whose name still adorns the metal canopy over the building’s front door. (Hawkinson, which makes equipment for retreading tires, relocated to Maple Grove.) The Hawkinson Building is one of five industrial structures in Northeast Minneapolis owned by Apiary Workspaces, founded by a Northeast native named Andrew Volna. Apiary repurposes the buildings primarily as office space; Volna says that his buildings seem to be attractive to small, entrepreneurial businesses, particularly creative ones, like his own.

To quote a tune: Everything old is new again.