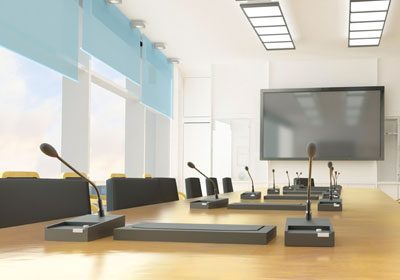 In the past, it’s been terrorist attacks, pandemic health scares, and volcanic ash plumes. Today, it’s a stubborn recession and the subsequent squeeze on travel budgets that has more and more companies considering new investments in videoconferencing technology.

There’s no one right way to do it. Solutions range from slapping a $100 Webcam on a PC to spending hundreds of thousands on a room-based systems whose quality borders on virtual reality.

Installation: The medical device maker has had some videoconferencing capabilities since the 1990s, but it significantly upgraded in 2009. The company switched to high-definition streams in its room-based systems and installed its first immersive telepresence systems—lifelike, multiscreen setups that give users a sensation they’re in the same room with remote colleagues. Medtronic also enabled videoconferencing on all desktop computers.

Equipment: The immersive rooms are built around Cisco TelePresence equipment. Each station has matching walls and furniture and up to three 65-inch screens. For its room-based systems, Medtronic uses a variety of equipment from Cisco and Polycom. They usually consist of two large screens and a single camera in each room. The company’s desktop videoconferencing runs on Microsoft Office Communications Server.

Prep work: Setting up an immersive telepresence site requires a great deal of preparation and bandwidth, says Rick Miller, Medtronic’s director of global network services. Because the equipment is so sensitive, heating, air conditioning, and ventilation systems may need to be moved or adjusted to prevent them from interfering. The network needs to be large enough and configured correctly to guarantee quality service. The room-based systems are less complicated but still need appropriate bandwidth. Medtronic tested desktop videoconferencing at selected sites to get a better idea of how much bandwidth it would require.

Who uses it: With just 10 sites worldwide, immersive telepresence is usually reserved only for executive meetings. The room-based videoconferencing systems, however, are used by all types of employees. Teams collaborating across multiple locations will sometimes camp out in a videoconferencing room for the duration of a project, Miller says. Use of the desktop system varies based on individual employees’ comfort level with the technology.

Business case: A few years ago, Medtronic was on the verge of tossing out its videoconferencing equipment because of lack of use. Then the recession hit and cutting travel costs became a priority. Since then, the company has found other benefits. “It’s the increased productivity of a meeting when you can actually look at all the nonverbal cues,” Miller says.

Installation: The health care provider is in the process of upgrading to a new videoconferencing system to replace an approximately seven-year-old one.

Equipment: The system is built with Polycom products—some of it older, and some of it newer, high-definition equipment. A standard room contains a 46-inch monitor with seating for five people. A handful of larger rooms contain bigger screens and higher bandwidth for sharing medical images, as well as wireless microphones for up to 20 participants.

Prep work: Rhonda Nelson, a systems analyst who supports Allina’s videoconferencing operations, listens in to the first 15 minutes of each videoconference to make sure users don’t have any problems. “In that time, I hear things” like feedback about audio and video quality or monitor placement, she says. Those observations, along with surveys of frequent users, have helped inform Allina’s plans for upgrading the system.

Who uses it: Videoconferencing is used for systemwide meetings. The hospital and clinic network has a set of committees that oversee such areas as quality and medical records. Members are often spread out across the system’s metro and outstate locations. Physicians will use it to discuss cases with each other. Allina started using videoconferencing carts this year to provide interpretive services in its hospitals and some of its clinics.

Business case: During the health care provider’s 2009–2010 fiscal year, it estimates that it saved close to $180,000 in mileage costs alone, not counting lost time due to travel. The upgrade is aimed at making the system higher quality as well as easier to use. The older equipment has required “hand holding” by IT to set up conferences. The goal is also to enable desktop and mobile videoconferencing.

Installation: The commercial and industrial construction firm installed a videoconferencing center at its headquarters in May 2009, though it’s been using PC-based Webcams a little longer than that.

Sites connected: Mortenson has also built videoconferencing centers in its Milwaukee office. They can link up with the Twin Cities office or connect with approximately 90 Webcams located throughout the company, some on employees’ desktop computers and others set up in conference room trailers at many of its construction sites.

Equipment: The main videoconferencing centers use Polycom equipment, including 50-inch video monitors with HD room cameras attached to the base. The Webcam systems run on the company’s Cisco VOIP network. A typical job site set up consists of a $100 Webcam attached to a Lenovo PC at one end of a conference room. The company also uses smart board technology.

Prep work: Mortenson already runs private, high-speed network connections to its major job sites, and because its videoconferencing software doesn’t require particularly high bandwidth, it doesn’t take much to set up a station. All someone at the site has to do is plug in the camera and turn on the computer. The software installation and set-up is then handled remotely by Mortenson’s tech team.

Who uses it: Any executives or managers who supervise groups or employees in remote markets. At a job site, a superintendent or project manager may regularly use the system to communicate with architects and engineers. Videoconferencing has also been valuable for training, allowing someone to simultaneously make the same presentation to multiple sites.

Business case: Using relatively inexpensive equipment, Mortenson has managed to significantly reduce travel expenses, says IT Director Nigel Wingate. Customers are increasingly asking for onsite videoconferencing so they can feel more connected to their project. For all the enthusiasm, though, there’s also concern about loss of personal connection. “People still get a great deal of benefit from being able to get on a plane and actually go out to dinner with somebody,” Wingate says. He thinks eventually an equilibrium will emerge in which there are more frequent meetings but more of them conducted over videoconferencing.

Installation: The health care provider installed a videoconferencing system at its Woodwinds Health Campus in 2005.

Sites connected: The system connects two operating rooms, a 130-seat auditorium, and a learning laboratory, all at the Woodbury location.

Equipment: Each operating room contains three Sony digital video cameras with 20x zoom capabilities. Two of them are mounted overhead on a track system; the third is on wheeled pedestal that can be positioned for horizontal shots. The cameras transmit live video to a Sony projector in the auditorium and a 50-inch plasma monitor in the learning laboratory.

Prep work: Woodwinds hired a consultant who was familiar with surgical videography to walk it through the process. Orthopedic services director Kathleen Killeen says they also spent time interviewing doctors who would use the system about what amenities it would need in order to be most useful for them.

Who uses it: The videoconferencing system is used for training and education for Woodwinds surgeons and their assistants. The campus also regularly holds conferences and events that are open to the broader community. Vendors and colleagues sometimes produce or request videos on procedures, which can then be used in future training sessions. The provider has also hosted live surgery Webcasts from the facility.

Business case: “We want to be a place where surgeons want to come,” Killeen says. Orthopedics is a constantly evolving field that requires frequent training to keep up with new technology. Woodwinds wanted to create a “collegial learning environment,” she says. The set-up reduces the risk of infection by allowing observers to watch from another room, where they also have better views than if they were looking over shoulders in the operating room.

Installation: The architecture and engineering firm started using videoconferencing about eight years ago and upgraded its equipment in 2009.

Sites connected: The company has seven offices around the country. Each location has at least one videoconferencing center. It has four videoconferencing rooms at its Minneapolis headquarters office, and that number will double to eight this fall when HGA moves into its new home in the Ford Center.

Equipment: The company replaced its original system two years ago with a new one from Tandberg Edge (since acquired by Cisco). All seven offices use the same type of equipment to simplify tech support. A typical room contains a computer, wireless keyboard and mouse, and a camera attached to the base of a 50- to 70-inch, wall-mounted monitor. The screens are as large as they are in part to accommodate a presentation mode, which lets callers view and mark up shared documents. “You don’t need to supersize a person, whereas a project drawing you might need to,” says Nancy Schmidt, HGA’s director of information technology.

Prep work: The design of the room was done in collaboration between HGA designers and its vendor. Each room is wired with digital telephone lines (ISDN), as well as Internet (IP) cables. The company beefed up its bandwidth capacity, but even with pretty good picture resolution, the videoconferencing hasn’t been “all consuming” of its network.

Who uses it: “Absolutely everyone,” Schmidt says. Architects and project managers use it for collaborating with colleagues and employees in other offices. Executives use the system for making company-wide announcements. Human resources uses it for training and presentations.

Business case: Videoconferencing has drastically reduced the company’s travel expenditures, but it’s also helped reduce errors and omissions. That’s because it allows for easier and more collaboration on the front end of projects, Schmidt says. The technology has allowed HGA to “flatten” its workload across its seven offices, easily shifting assignments from one location to another as needed. “It’s a part of our culture now,” she says. “You could not remove them.”

Sites connected: The company, which makes carts and screen mounts for televisions and computer monitors, uses videoconferencing to link its Minnesota headquarters with a manufacturing and engineering site in Dongguan, China, as well as its European sales office in the Netherlands.

Equipment: It uses equipment from LifeSize, a relative newcomer in the industry that pioneered high-definition, low-bandwidth videoconferencing. What’s different about Ergotron’s system is that it’s mobile. Instead of being installed in a conference room, the 42-inch monitor and camera are attached to one of Ergotron’s Neo-Flex carts.

Prep work: The project didn’t require any remodeling, and Ergotron already manufactured the Neo-Flex carts used to hold the system together. (“In this case, the cart came before the videoconferencing horse,” says Channel Marketing Manager Bob Hill.) When employees needs to use the system, they simply roll it into place and adjust the height so that it matches the table ledge. It’s typically parked in the company’s conference room, but it frequently gets rolled out to Ergotron’s testing laboratory, employee cubicles, and smaller meeting areas.

Who uses it: Pretty much every department uses the system, Hill says. Engineers are in constant contact with the manufacturing team in China. The company regularly uses the technology at trade shows. A small team will travel to the event and set up a screen on one of its Ergotron carts. Then product experts in Minnesota work the booth remotely via videoconferencing. “We’ve had some pretty interesting customer interactions that way,” Hill says.

Business case: Ergo-tron was seeking a way to reduce its travel budget without disrupting new product launches that required collaboration with its international facilities. Videoconferencing allowed it to do just that. The fact that its equipment is movable has been particularly useful, allowing engineers to position cameras on prototypes or products wherever they are set up.