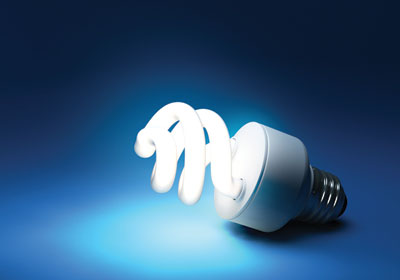 A local solution for the toxic innards of compact fluorescent bulbs.
January 07, 2013

Mercury, No. 80 on the periodic table of elements, is known as one of only two elements that are in a liquid state at room temperature (the other is bromine) and for health risks that come with exposure to it.

In 1992, Minnesota, along with several other states, began requiring that all fluorescent bulbs be recycled, but of the up to 350 million compact fluorescent lamps (CFLs) sold each year, the return rate from consumers is less than 3 percent. (Industrial return ranges from 22 to 25 percent.)

That’s a problem, because CFLs contain mercury, and consumers are prohibited from disposing of them in the trash. In 2005, Mankato-based VaporLok Products, LLC, invented recycling bags to handle CFLs and protect mercury from escaping from a cracked or damaged bulb. The latest model, the VaporLok Capture, which has an added layer of mercury protection, became available this past June, with patent pending. The metallic bags come in several sizes and include instructions on how to properly dispose of used CFLs in your area.

VaporLok CEO Brad Buscher is anticipating success for one specific reason: There are essentially no competitors in the industry. VaporLok won’t disclose sales figures, but is predicting annual revenue of $50 million to $60 million from the bags by 2018. The endeavor has been financed by Buscher himself and a partnership with disposal giant Waste Management, Inc.

Consumers can currently buy the bags online—a container that holds up to four CFLs retails for $6.99—and bring them to a local hardware retailer for disposal. Some retailers charge for this service.

The fly in the ointment is that Home Depot and many small retailers accept CFL recycling at no charge, with no bags. Buscher is confident the manifest dangers of the bulbs will sway consumers to invest in their own safety.

“We are positioned in front of a tidal wave,” Buscher says. “People are going to be looking for a solution and hopefully they will do the right thing.”