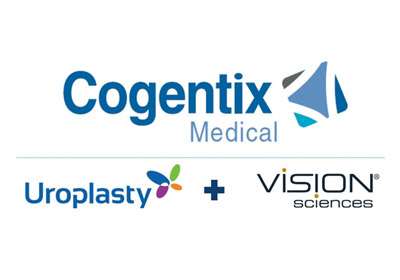 The new firm, to be called Cogentix Medical Inc., will try to tap into a $1.3 billion endoscopic device market.
January 01, 2015

Minnetonka-based Uroplasty Inc., will merge with a New York medical device maker in a deal that will keep the newly formed firm in Minnesota.

Uroplasty and Orangeburg, N.Y.-based Vision-Sciences, Inc., announced the merger Monday, saying they expect to close the transaction during the first half of 2015. To be called Cogentix Medical Inc., the new company is expected to generate roughly $50 million in revenue for the fiscal year beginning April 1, 2015. In a conference call with investors Monday, the company expressed a goal of $100 million in revenue within three years.

Kill became CEO when David Kaysen resigned in April 2013. Kill previously served on Uroplasty’s board starting in 2010. The company underwent another shakeup a few months later when its chief financial officer, Mahedi Jiwani, stepped down amid an internal investigation into how it paid sales commissions.

Uroplasty’s medical products primarily treat bladder dysfunction and pelvic disorders. Urgent PC, its cornerstone product, uses a hand-held stimulator, a thin needle electrode and a lead set to perform a non-surgical treatment for overactive bladders. A major focus of Cogentix Medical’s will be marketing Vision-Sciences’ EndoSheath technology, which combines endoscopic technology with a sterile, disposable microbial barrier. In increasing its presence in urology and other specialties that perform endoscopic procedures, Cogentix Medical will seek to tap into what it pegged as a $1.3 billion market opportunity.

Uroplasty’s 44 U.S. salespeople will join Vision-Sciences’ 12 to market the EndoSheath technology, among other devices, and Cogentix Medical expects revenue growth between 11 and 14 percent for its first fiscal year. Once its existing sales team is fully trained on the Vision-Sciences’ product line, the new firm expects to achieve annual revenue growth of 15 percent beginning with its second fiscal year.