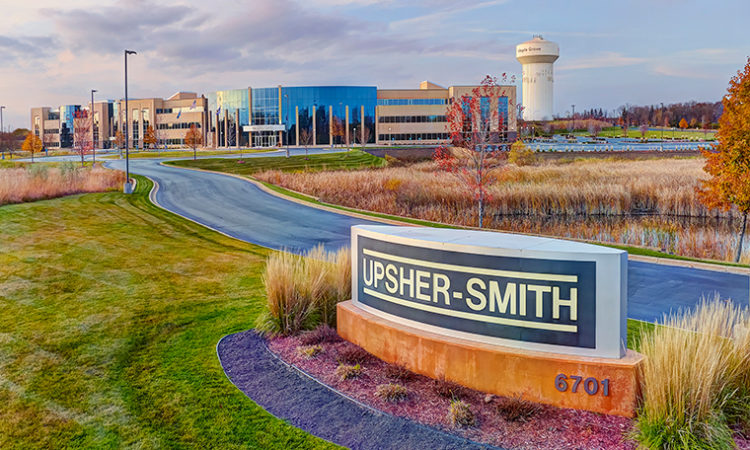 The new expansion project marks the third phase of development of the Maple Grove Campus.

Upsher-Smith Laboratories is expanding in a big way. The company plans to hold a ceremonial groundbreaking on Wednesday for a four-story, 298,000-square-foot expansion dedicated to drug manufacturing at its Maple Grove campus. The project is slated for completion in late 2020.

The company has a century-long history in Minnesota. English-born pharmacist and chemist Frederick Alfred Upsher Smith founded the company in Minneapolis in 1919. The company was owned by the Evenstad family for 47 years until the 2017 sale of its generic pharmaceutical business, the largest part of its operations, to Japan-based Sawai Pharmaceutical Co. for $1.05 billion.

As of June 1, Upsher-Smith had 463 employees in Maple Grove. A spokeswoman for Upsher-Smith said that the number of new jobs that will be based there after the expansion has yet to be determined.

But even though the home office is now on the other side of the globe, Shaye Mandle, president and CEO of the Golden Valley-based Medical Alley Association, a trade group for Minnesota medical companies, says that the expansion demonstrates “a long-term commitment to grow here.”

Historically, Minnesota has been a strong market for medical device companies, but Mandle says that the pharmaceutical sector in Minnesota is growing.

Takeda Pharmaceutical Co. Ltd., also based in Japan, acquired a Brooklyn Park biotech plant in late 2015, with plans to open its first U.S. plant. Takeda ultimately hopes to have 250 employees at the Brooklyn Park facility.

“We’re continuing to see more and more growth in the biopharma sector. With Upsher’s growth that’s another great sign. The pharma biotech sector continues to grow,” says Mandle. “You’re seeing a few of the bigger players coming into town….We see the size of that overall ecosystem growing here.”

Another Minnesota pharmaceutical manufacturer, ANI Pharmaceuticals Inc., is based in Baudette near the Canadian border. The publicly-traded ANI often flies under the radar, but it reported revenue of $201.6 million for 2018. Generic pharmaceuticals accounted for 58 percent of ANI’s sales last year at $117.5 million. According to its annual filing, ANI had 299 employees at the end of December.