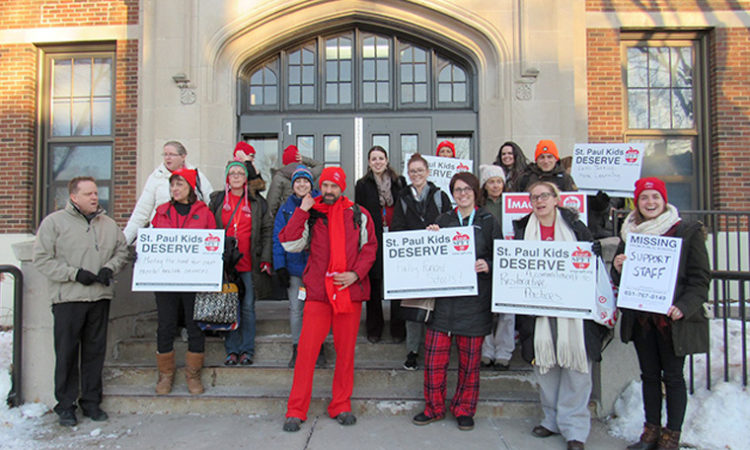 The St. Paul union has threatened to strike over âthe lack of progress at the bargaining tables on the most important issues for SPFTâs members.â ( Photo by St. Paul Federation of Teachers)

A walkout could begin as early as Feb. 13. Here's a look at how things got to this point and what key sticking points will have to be addressed in order to avoid that.
By Erin Hinrichs
February 06, 2018

At the outset of teacher contract negotiations between the St. Paul Public Schools district and the St. Paul Federation of Teachers this past fall, it appeared as though both parties viewed the district’s new leadership roster — with a full slate of union-backed board members and a new superintendent — as an opportunity for a fresh start. But there’s no getting around the fact that district finances are tight and most items the union wants come with a significant price tag.

Early on, the district invited reporters to a media roundtable to showcase its new “Guiding Values of Negotiations with Employee Labor Groups” and publicized its current budget deficit in an attempt to set some firm financial parameters. Leadership has been adamant, from the start, that the district aims to limit any employee contract pay increases to 1 percent.

SPFT leadership, taking a more unusual route to kicking off contract negotiations, averted confrontation by publicly calling on the district to join forces to go after local tax-exempt corporations and nonprofit hospitals and colleges to “pay their fair share to support public schools.”

Once it became apparent that district leadership had no interest in teaming up in this capacity, tensions rose. Now just a little more than three months into contract negotiations, the union — which represents about 3,700 teachers, education assistants and support staff in St. Paul district schools — has threatened to strike over “the lack of progress at the bargaining tables on the most important issues for SPFT’s members,” according to a press release issued at the start of the month.

Members of all three bargaining units voted last Wednesday to authorize a strike. The federation hasn't called for a strike authorization vote since 1989, when it passed overwhelmingly. And a full-blown teacher strike against the district hasn't happened since 1946.

In response, the district began preparing for the possibility of a strike. On Monday it also entered into a full week of additional mediation days with SPFT.

If the two sides can’t reach an agreement, a walkout could begin as early as Feb. 13, forcing the district to cancel classes and deal with the ensuing public image of dysfunction that its leaders have been working to shed since coming into office.

As both parties continue to hash things out behind closed doors, here’s a look at how things got to this point and what key sticking points will have to be addressed in order to avoid a walkout.

From the outside, it looked as though SPFT had largely been getting its way these past two years.

In the 2015 general election, it had endorsed four new school board candidates who ran on a platform promising to make schools safer, among other reforms, as a number of schools in the district made headlines for student-on-teacher assaults.

When this slate of newcomers won, they clashed with then superintendent Valeria Silva at their very first board meeting by laying out a list of demands. The list, complete with a timeline, included things like boosting enrollment over the next three years and coming up with a new school climate plan in just three months' time.

By month five, Silva had agreed to take a buyout. Her pre-existing efforts to move special education students into regular classrooms and place sixth-graders in middle schools had put her at odds with new board leadership.

Amid this turmoil, the new board approved a new two-year teachers contract that included things like committing $4.5 million over three years to fund a restorative-practices pilot program and a pay increase that would cost the district $21 million in salary and benefits over the next two years. Then they entered into a yearlong superintendent search that brought Joe Gothard on board as the district’s new leader.

Heading into the current round of teacher contract negotiations, however, board members who were involved in approving the last teacher contract were more well-versed in the district’s budgeting process. Director Steve Marchese recently told the Pioneer Press he was “a little perplexed” by the union’s current asks, given what both parties know about financial pressures the district is facing as a result of declining enrollment and budget cuts, year after year.

As district leadership attempted to put their foot down, union leadership proposed they team up against an unlikely common enemy — local, tax-exempt corporations and nonprofit hospitals and colleges — rather than fight over existing resources during contract negotiations.

District leaders have maintained that they’re not even willing to entertain this idea unless the union agrees to allow the district to apply for state Q Comp funding, an alternative compensation program that union brass have long resisted because it requires a small amount of performance pay.

Teacher pay — the hallmark of any teacher contract proposal — poses a clear hurdle during this round of contract negotiations. St. Paul teachers already rank as the highest-paid teachers in the state, with an average salary of about $76,000.

The union has proposed a 2.5 percent increase for each of the two years covered by the new contract. The district is offering a 1 percent increase to employee contract pay. Furthermore, the district has indicated that any other union proposals with price tags attached would have to come out of this same pot of money.

That puts the district's offer at $2.1 million in new spending for teachers and any other union demands. It’s a far cry from the $159 million that the union is asking for to cover teacher pay increases and other asks, according to district estimates.

Debates over how to address class sizes are nothing new to contract negotiations either. District leadership generally agree smaller class sizes are better. But they are feeling increasing pressure to keep class sizes flexible, as they seek to address the more pressing issue of boosting enrollment. At this point, the district has offered to keep the current ranges intact for schools at 95 percent capacity.

The union has proposed hard caps to replace the existing class size ranges. The proposed caps start at 18 students in any pre-K room. For higher poverty schools with 70 percent of its students qualifying for free- and reduced-price lunch, the union is proposing a cap of 20 students for kindergarten classes and a cap of 30 students at the high school level. If the district were to concede to this demand, district staff say this item, alone, would cost the district $91 million to hire additional teachers to accommodate having smaller class sizes.

The union is also asking the district to supply every school site with a nurse and a librarian, along with boosting the number of school social workers and counselors.

Again, this is something the district generally supports. But it’s saying the funds for these types of staff additions would need to come out of the 1 percent teacher pay increase that’s currently on the negotiating table. Likewise, union proposals to expand the existing restorative justice pilot program are meeting resistance based largely on financial constraints.

In advance of Monday’s negotiations, in a letter to SPFT union leadership, Board Chair Zuki Ellis said, “As we continue to negotiate, with the hope of reaching an agreement and averting a strike, we will listen to and communicate with all employees, work to create a school system that everyone can be proud of, work within our budget while meeting financial obligations, and promote a culture that is focused on students, their growth and achievement.”

In a press statement released the evening union members voted to authorize a strike, SPFT President Nick Faber, indicated a strike, at this point, is a very real possibility.

“Nobody wants to go on strike, and we will do everything in our power to prevent one,” he said. “However, we are going to fight for what our students need and not apologize for working to create the schools Saint Paul Children Deserve.”