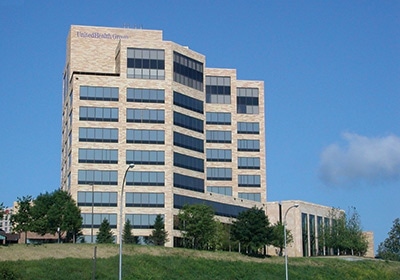 More than half of its profits were attributable to Optum, its fast-growing health services business.
April 19, 2017

Fueled by a 12 percent year-over-year jump in Medicare enrollees and its departure from Affordable Care Act exchanges, UnitedHealth Group’s profits rose 35 percent during the first three months of 2017 compared to the same period a year ago.

Results reported Tuesday by the nation’s largest insurer were better than expected, easily topping analyst expectations. While Wall Street had predicted adjusted earnings of $2.17 a share, UnitedHealth actually earned $2.37 a share on profits of $2.17 billion.

For the quarter, the Minnetonka-based insurance giant took in sales of $48.7 billion, a 9.4 percent improvement over last year.

Once again, Optum, the company’s health services business, was a big factor in UHG’s positive performance. Sales within the unit grew by $1.6 million year-over-year, or about 8 percent, to $21.2 billion. In turn, its profits rose by over 15 percent to $1.3 billion, amounting to nearly 60 percent of the company’s overall profits for the quarter.

Optum unit shows no signs of slowing, either. In January, the subsidiary announced a $2.3 billion deal for Surgical Care Affiliates, which, if approved, would make it one of the largest surgery center operators in the U.S.

Meanwhile, UnitedHealth Group told investors in a conference call Tuesday that it wanted lawmakers to repeal the ACA tax on health insurance companies. Although the tax is suspended for 2017, the industry wants it gone for good.

“We hope Congress acts soon to permanently repeal the health insurance tax before it further worsens consumers’ premiums, state budgets and senior benefits,” UnitedHealth Group CEO Stephen Hemsley said during the call. “We have no insight as to whether that will or will not occur, and accordingly, our plans continue to assume the tax will return in 2018, which will raise premiums and/or reduce benefits for commercial businesses, state and our nation's senior population.”

In the short term, UnitedHealth Group is expecting an even better year than previously expected. The company raised its guidance from a range of $9.30 to $9.60 a share to $9.65 to $9.85 a share.

Investors responded positively to the move, pushing UnitedHealth Group’s stock price up about 1 percent to $168.59 a share.