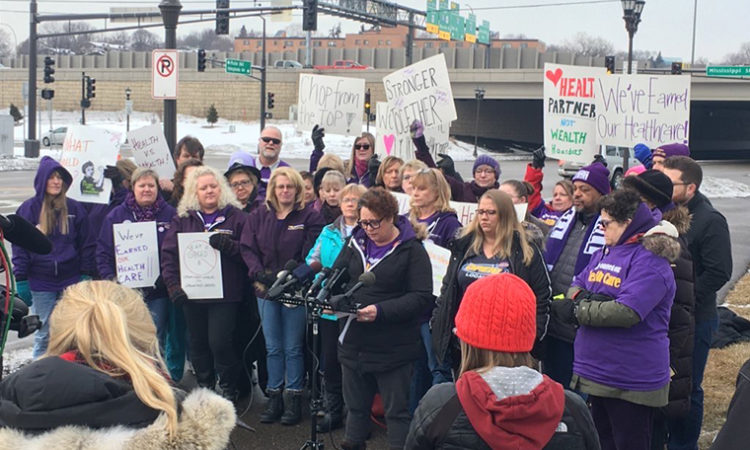 The seven-day strike would begin Feb. 19 if no agreement is reached.
By Dan Niepow
February 07, 2020

About 1,800 unionized HealthPartners workers are slated to strike later this month if they’re unable to reach an agreement with the health care system.

“It feels like it’s profits over patients and employees,” Lynch said outside HealthPartners’ Neuroscience Center in St. Paul. She added that workers “are willing to go back to the table at any time.”

Health insurance premiums and copays have remained the same for SEIU members for more than a decade, union officials said.

For their part, HealthPartners leaders maintain that their proposal is “fair and reasonable.” In a statement, they said the strike vote is “disappointing.”

“We remain committed to reaching an agreement on a new contract that is fair to all,” HealthPartners officials said in a statement.

A federal mediator will need to call both parties back to the table, according to HealthPartners.

The health system didn’t say whether it had a contingency plan in place if the strike goes through.

“We can’t really tell you what kind of care you’re going to get when we’re not there,” Lynch said when asked how the union would address patients’ concerns about the strike.