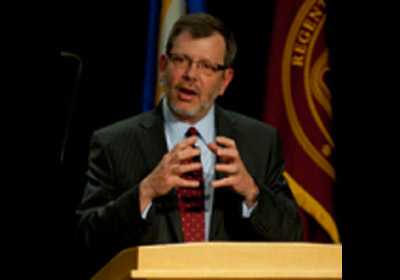 Under Fire From U Of M, Institute Modifies Report Critical Of Administration

On Monday, the institute learned that some of the data used to compile the report may have been flawed.
June 01, 2014

The Washington, D.C.-based institute that released a report early this week characterizing the University of Minnesota as top-heavy with administrators has withdrawn and modified the document, the Star Tribune reports.

U of M officials had blasted the report as flawed and inaccurate. President Eric Kaler called it “dead wrong.”

The “The One Percent at State U” report issued Sunday by the Institute for Policy Studies had said the U of M was among the top five worst offenders in the nation when it comes to university spending on administration. The institute calls itself “a progressive multi-issue think tank.”

On Monday, the institute learned that some of the data used to compile the report may have been flawed, author Marjorie Wood told the Star Tribune. So the organization “took the report down temporarily” and reviewed its findings, the newspaper reports.

Kaler says the institute misread public data. The U of M, which has been criticized in recent years for being top heavy, posted an online data-rich rebuttal on its website.

In the rebuttal, U administrators say:

“Overall, the report misrepresents the University of Minnesota, attempts to paint a very sensational picture to support IPS’ thesis, and ignores the reality at our institution. While there is still work to do, the University of Minnesota is making strong progress in providing access to students, holding down student debt, reducing administrative costs and investing in students’ future education and needs.”

The rebuttal also said the original institute report “fails to mention many other positive and very significant changes under President Kaler’s leadership.”

Kaler has battled charges of administrative bloat since he took the job three years ago, and he says he has made aggressive efforts to trim fat.

University officials say they plan to stick to a bargain they made with lawmakers for the next academic year: further administrative cuts, in exchange for more money from the state, more faculty hires and a second year of tuition freezes for undergraduates.