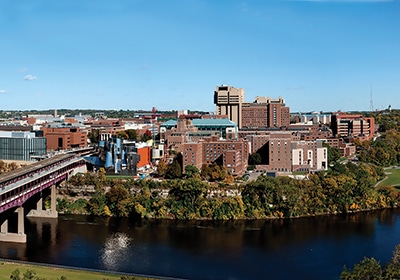 Since the state Legislature first approved funding for the MnDRIVE research program in 2013, the University of Minnesota says the effort has attracted $76 million in external financial backing, produced 143 invention disclosures and spawned three startup companies.

Those are real economic benefits that show it is fulfilling its stated purpose of boosting some of Minnesota’s key emerging tech industries, U of M officials argue – which is why they are seeking new funding over and above the current $18 million per year MnDRIVE now receives to expand its scope into several new areas of research.

MnDRIVE is short for Minnesota’s Discovery, Research and Innovation Economy, and was established to better align the U of M’s research capabilities toward emerging industries where the state already has a head start and thus could develop tech industry clusters that would make significant contributions to the future economy.  Its current areas of concentration include brain conditions, environmental innovation, global food production and robotics.

Now the university’s Board of Regents wants to expand that list.

Last week, they approved their budget request from the Legislature for the 2018-19 biennium – just short of $1.4 billion in all. Some $126 million of that total is earmarked for new initiatives, including $32 million for what school officials are calling “MnDRIVE 2.0,” in which its research focus would be expanded beyond the current four areas.

Just what those areas are has not yet been officially decided. However, U of M vice president for research Brian Herman has indicated it’s likely one of them would be expanding cutting-edge cancer research trials to locales in greater Minnesota, where more of the state’s residents would have access to their possible benefits.

Other new focus areas seem likely to include reducing inequities in education, employment, health and the criminal justice system; developing new technologies and solutions for water management and monitoring; and harnessing the capabilities of “big data” to drive Minnesota’s economy.

The case University President Eric Kaler will be making to legislators is that MnDRIVE’s track record of attracting private investment to the current focus areas is a reliable indicator that expanding it to new ones will yield more yet more dollars.

The U asserts MnDRIVE has so far resulted in research collaborations with more than 225 external partners, including 3M, Cargill, Boston Scientific, Syngenta, Tonka Waters and Toro; the hiring of 442 faculty, students, fellows and staff; and the publication of 1,500 research papers.

One recent success story the school is pointing to is in the field of brain conditions. Last month, the U of M celebrated its selection as a Udall Center of Excellence in Parkinson’s Disease Research, which came with a $9 million research grant from the U.S. National Institutes of Health. Dr. Jerrold Vitek, chairman of the U’s neurology department, said state legislative support through the MnDRIVE program “set the stage” for the selection.

Another is a collaboration between its college of science and engineering and Richfield-based Sentera LLC, a maker of unmanned aerial drones for “precision agriculture.” Their effort is aimed at producing an autopilot toolkit for drones that would target aphids in soybean crops.

MnDRIVE funding has also been highlighted as a key contributor to an effort at developing better bioreactors to remove pollutants from agricultural runoff. U of M researchers last year partnered with a statewide farmers’ organization to conduct experiments on how woodchip bioreactors act to naturally filter phosphorus and nitrogen from runoff and to research ways to improve their performance, perhaps extending the use of such bioreactors to treat sulfate levels in water on the Iron Range.