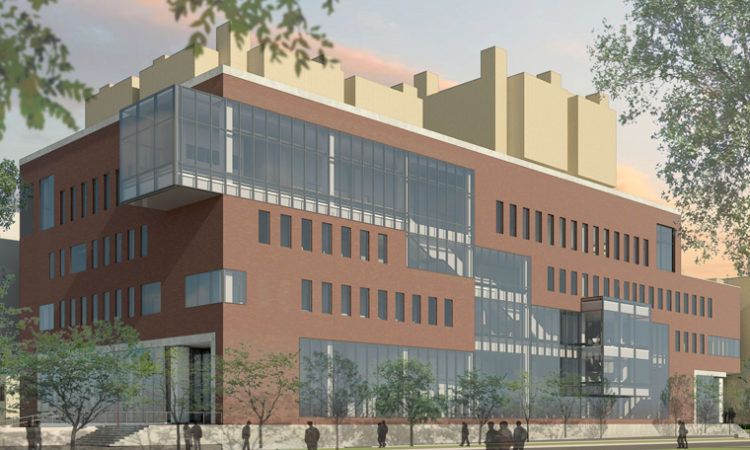 A rendering of the Health Sciences Education Center coming soon to the University of Minnesota. (Renderings by Perkins + Will and SLAM)

Governor Mark Dayton, who attended the groundbreaking ceremony, also made the plea to the State Legislature to "make significant, needed investments in the maintenance and repair of our higher education institutions throughout Minnesota."
By Sam Schaust
February 13, 2018

University of Minnesota leaders along with Governor Mark Dayton and other state officials gathered at the public institution’s East Bank campus Tuesday morning to ceremoniously break ground on the latest addition to the school, a 202,000-square-foot education and training center for its health sciences students.

The new facility, which is being constructed on the corner of SE Harvard Street and Delaware Street SE and will connect to the Phillips-Wangensteen Building next to the University’s Medical School, is being largely funded by the state.

Approximately $66.7 million of the construction costs will be paid for by the State of Minnesota. The total cost of the project is marked as $108.6 million.

The University and a number of private donors will foot $33.3 million of the remaining costs, while the final $8.6 million will come from reallocated TCF Bank Stadium bond proceeds, the institution said in its release Tuesday.

The Health Sciences Education Center (HSEC), as it will be known, “is much needed,” University of Minnesota president Eric Kaler said in a statement. “[It] will advance the University’s mission to prepare Minnesota’s diverse and innovative health care workforce,” he added.

The University of Minnesota’s School of Dentistry, its Medical School, School of Nursing, College of Pharmacy, School of Public Health and the College of Veterinary Medicine—which altogether educate more than 6,200 health sciences students annually—will utilize the facility once it’s completed.

A current estimate for the building’s substantial completion is December 21, 2019, with classes set to begin in the HSEC during the winter-to-spring 2020 semester.

Major construction on the HSEC, however, isn’t set to officially start until June of this year. The school will first have to make room for the new building by tearing down its VFW Cancer Research Center and the Masonic Memorial building. Demolition is set to start in early April.

Construction of the HSEC also entails accessibility, mechanical and electrical infrastructure improvements to the Phillips-Wangensteen Building, which will connect the new facility to most of the existing health sciences schools that are in the area. 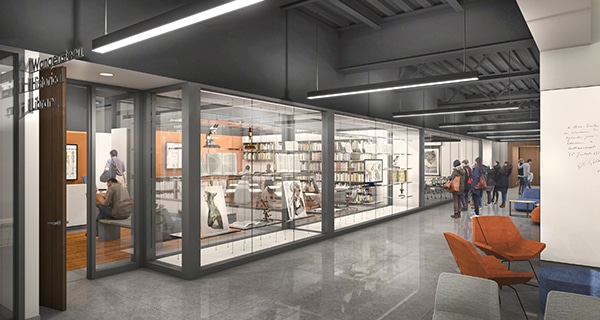 An early outline of a library in the remodeled Phillips-Wangensteen Building. (Rendering by Perkins + Will and SLAM)

“This new facility,” said Gov. Dayton in a statement, “will help Minnesota develop the next generation of world-class medical professionals.”

According to the University of Minnesota, its alumni currently make up more than 70 percent of the state’s health care workforce. The school has said the HSEC will be state-of-the-art and include active learning and small group teaching spaces; interprofessional study areas; a “revamped” biomedical library that utilizes virtual and augmented reality learning; and simulation training stations, among other amenities.

“Interprofessional practice and training is a consistent request from community, academic and industry leaders,” said Dr. Jakub Tolar, Dean of the University’s Medical School and interim vice president for health sciences, in prepared remarks. “We look forward to educating health sciences students in a new state-of-the-art facility where we hope to set the national standard for interactive, engaged health education and training.” 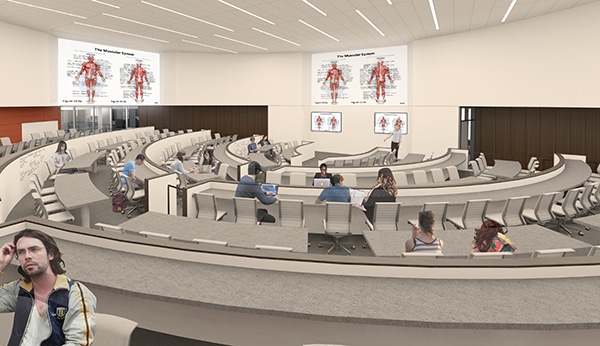 A mock-up of a learning center in the Health Sciences Education Center. (Rendering by Perkins + Will and SLAM)

JE Dunn Construction is acting as general contractor on the HSEC project. Perkins + Will and SLAM are the facility’s co-designers with Perkins + Will being the project’s architect of record.