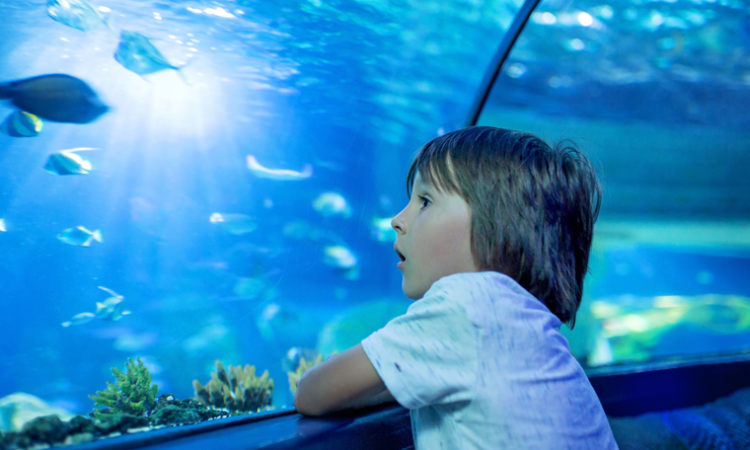 The 23,000 square-foot facility will be interactive and feature exhibits of marine animals, birds and reptiles from around the world. The project is expected to create 75 jobs.
By Amanda Ostuni
December 11, 2018

Upgrade announcements have been rolling out of the Rosedale Center in recent months — from a new food hall, to parking additions, and even the signing of a new Von Maur department store. However, word on one of the mall’s biggest add-ons slipped out this week: the construction of a new two-story aquarium coming early next year.

While construction on the 23,000 square-foot facility began months ago, the Rosedale Center hadn’t intended to publicize their plans until January. Unfortunatly, SeaQuest, the Idaho-based company collaborating with the mall on the project, already began advertising the incoming aquarium on its website.

“In early 2019, SeaQuest Roseville will take its guests on an adventure through rain forests, deserts and the depths of the seas,” SeaQuest’s website reads. “With exciting exhibits and activities for families and children of all ages, you’ll be able to get wet with the stingrays, feed birds and reptiles, encounter the caimans, marvel at the sharks, take shellfies with the snakes and much more.”

The SeaQuest aquarium will be the second Twin Cities marine life attraction after Mall of America’s Sea Life Aquarium.

The project is expected to generate 75 jobs, both full and part-time positions.

The aquarium will have continent-themed sections (including Iceland, Egypt, the Caribbean, South America, Australia, and China) and each section will feature species unique to those regions, from Amazonian tropical birds to Egyptian desert reptiles, and more.

The attraction is meant to be largely interactive. Visitors will be able to feed an octopus or sharks, touch stingrays, snorkel with reef fish, and participate in educational shows.

“We’re excited to welcome families from across the state to come and enjoy this extremely fun, interactive destination where they will learn through discovery,” said Lisa Crain, General Manager at Rosedale Center, in a statement. “Our hope is that not only do families have a wonderful time, but that they leave with a newfound appreciation for animals, and for the planet.”

The two-floor aquarium is being built in the site of the old Ruby Tuesday’s, in the JCPenney wing of the mall, according to the Pioneer Press. SeaQuest spokeswoman Elsa MacDonald told the newspaper they chose the Roseville mall— its sixth facility nationwide — in large part because of its location. SeaQuest has followed a business model of choosing malls just outside of big cities for its aquariums.

SeaQuest openings have often been met with protests by animal rights groups. McDonald said in a statement that the company is strictly committed to ethical treatment of its animals. Additionally, SeaQuest will seek out local community-based organizations as partners for its SeaQuest Cares charity initiative.

SeaQuest offers a membership option — currently 50 percent off ahead of the grand opening at Rosedale — and members will receive exclusive first-look access.

The Rosedale Center SeaQuest is slated to open in spring 2019.