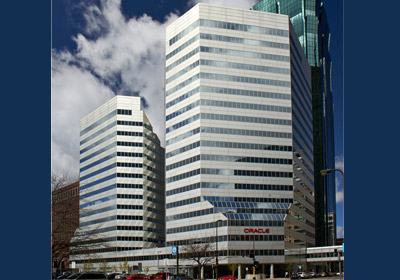 The Oracle & International Centre in downtown Minneapolis, which features 622,173 square feet of office space, has been sold to a joint venture between Investcorp International and Wildamere Properties.
October 04, 2013

Two adjoining office buildings in downtown Minneapolis have been sold.

The sellers were represented by a Minneapolis-based team from CBRE Group, Inc., the commercial real estate services firm that announced the deal on Tuesday.

The sale includes the Oracle Centre, a 20-story building at 900 Second Avenue South, and the International Centre, a 17-story building at 120 10th Street South, according to a CBRE official. The buildings share a common court area and are located near Nicollet Mall in downtown Minneapolis.

The buyer is a joint venture between New York-based Investcorp International and Twin Cities-based Wildamere Properties. Financial terms of the deal, which closed Friday, were not disclosed. The sale price will eventually appear in tax records.

Ted Jokerst, a senior vice president at Minnetonka-based Welsh Companies, told Twin Cities Business that WelshInvest was a “prior investment vehicle” of Welsh Companies that no longer exists. It included himself and Dennis Doyle, chairman of Welsh Property Trust, as well as other third-party investors, Jokerst said.

Wildamere Properties, meanwhile, is also a partnership between Jokerst and Doyle, Jokerst said. He said that CrossHarbor Capital Partners recognized this as a good time to sell, in part because the market’s recovering.

Oracle & International Centre features 622,173 square feet of Class A office space, placing it among the state’s 20 largest office facilities, according to Twin Cities Business research. The property had been on the market since July.

Hennepin County tax records list the Oracle Centre property’s estimated market value at $22 million. The value of the International Centre component, meanwhile, is listed as $19 million. Those figures don’t often align, however, with sale prices. For example, the IDS Center in downtown Minneapolis was sold for $253 million earlier this year. It had an assessed value of about $177.6 million.

Oracle & International Centre is currently 90 percent leased, and Oracle USA occupies about 45 percent of the space. Other tenants include marketing firm The Lacek Group and health care IT firm Surescripts.

Jokerst said the new ownership group currently plans to “hold everything at status quo” at the office buildings. “We do plan on making some upgrades but nothing significant at this point,” he said.