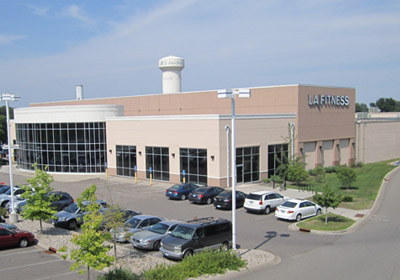 The building that houses an LA Fitness in St. Louis Park has been sold to a Florida-based real estate investment trust.
January 31, 2014

A 48,000-square-foot facility in St. Louis Park that houses an LA Fitness health club was recently sold for $13.85 million.

Real estate giant CBRE, which represented the seller, 7 & 41 Crossings LP, announced the deal on Tuesday. The seller is a local private investor and developer who had acquired the property, which once housed a Ford dealership, and retrofitted it to accommodate LA Fitness, Jim Leary, a senior vice president from CBRE’s Private Capital Group in Minneapolis, told Twin Cities Business.

The facility, which is located at 3555 South Highway 100, has now been sold to Orlando, Florida-based National Retail Properties, a real estate investment trust (REIT).

LA Fitness has occupied its current St. Louis Park facility since 2009, and it has 12 years remaining on its lease there, according to Leary, who has described the location as a “trophy quality investment property.”