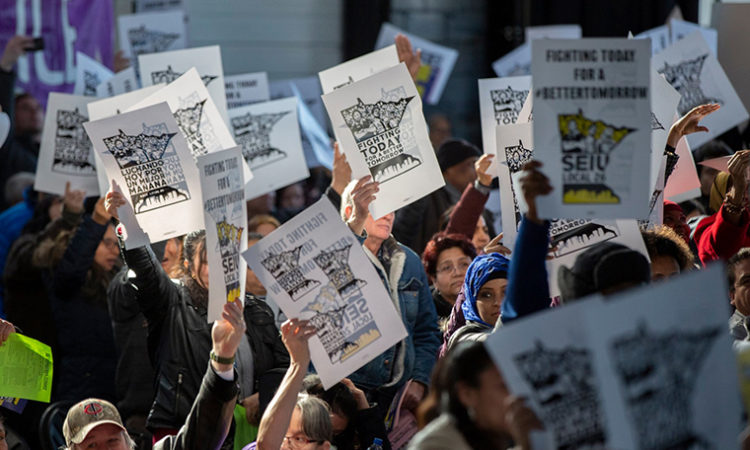 Drawing on concerns about climate change and coronavirus, Twin Cities commercial janitors on Thursday ratcheted up pressure on the metro’s biggest cleaning companies.

At a press conference at Minneapolis City Hall on Thursday morning, leaders from the Service Employees International Union (SEIU) Local 26—which represents about 4,000 commercial janitors in the Twin Cities—vowed to stage an “open-ended” strike if they can’t reach an agreement on a new contract. The strike would start on Monday, with no definite endpoint.

“We would be on an open-ended strike, which basically means that once we go out, we will stay out,” said Iris Altamirano, president of SEIU Local 26.

Last week, SEIU members held a 24-hour strike. The union has been negotiating terms for a new contract since November. The workers’ prior contract expired in Dec. 31.

The two sides appeared to have come closer to an agreement on wages and sick days, but remain at odds over the union’s proposal to initiate a “green cleaning technician training program.” The program would provide a small pay bump for workers who go through training on environmentally friendly cleaning techniques.

At Thursday’s meeting, SEIU leaders brought in several Minneapolis City Council members to back the potential strike. Councilmember Steve Fletcher, who represents Ward 3 where many prominent downtown office buildings are located, said union members are asking for things “we should all want them to have.”

“We are in a climate crisis, and we know that the top two things that we do to contribute to global warming are inefficient buildings and traffic,” he said. “When … the professionals who maintain our buildings give us advice about green cleaning strategies, we should be listening.”

SEIU and cleaning subcontractors are slated to meet again on Thursday and Friday. Negotiations could continue into the weekend.

“We’re disappointed that the union has self imposed this strike deadline,” he said “We’re hopeful we have an agreement in the near future.”

Nesse declined to share details on specific proposals still on the table.