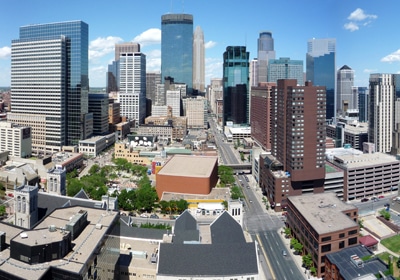 A new study finds that the Twin Cities has a strong, growing pool of tech workers. The report, “Scoring Tech Talent” from Los Angeles-based CBRE Group Inc., ranks Minneapolis as the 15th top market for tech talent in U.S. and Canadian cities, a jump of seven spots compared to last year’s study.

The CBRE rankings are based on 13 different factors including education levels, the cost of living and the presence of millennials. According to the analysis, the top five tech markets are the San Francisco Bay area, Washington D.C., Seattle, New York and Austin, Texas.

“From start-ups with local roots in the area to giants putting a flag down, we’re seeing a true transition into a technology hub,” said Tad Jellison, executive vice president with CBRE’s local office, in a statement. “With the tight market in the North Loop, it’s becoming increasingly important to begin talking real estate strategy with these companies as early as possible to allow for maximum flexibility.”

The Minneapolis market ranked fifth overall in the educational attainment category: 48.1 percent of people 25 years or older have earned a bachelor’s degree or higher.

The study also ranked Minneapolis fifth for its increased rate of “millennial concentration,” a measure of residents 20 to 29 years old who live in metro downtowns. Minneapolis saw a 21.8 percent increase in the number of millennials living downtown between 2009 and 2014.

Minneapolis ranked 14th overall for total millennial population growth with a 7.1 percent increase between 2009 and 2014. The national average gain during this time was 3.1 percent. But cities such as Dallas/Fort Worth, St. Louis, Chicago, Phoenix and Atlanta all saw a drop in millennial populations over the same period.

Minneapolis ranked 12th overall for its total “tech talent pool.” Based on April data from the U.S. Bureau of Labor Statistics, the Twin Cities had 92,530 tech workers. The number of tech workers here increased 34.8 percent from 2010 to 2015.

The report also notes that the Twin Cities is not as expensive for companies as the traditional tech capitals: “While the cost of office space has increased since 2011, Minneapolis remains in the middle of the pack for the cost of doing business and boasts low cost of living compared to the top tech markets in the study.”

The publicly traded CBRE is the world’s largest commercial real estate services firm. The company has a large presence in the Twin Cities with approximately 850 employees here with offices in Bloomington and downtown Minneapolis.