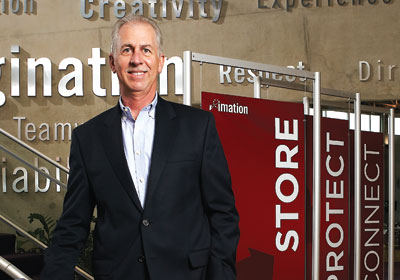 Changes that go to its very core appear to hold the greatest promise yet for this struggling 3M spin-off.
January 01, 2012

Imation has been trying to make a go of it for so long now that investors are beginning to lose hope. The Oakdale-based company’s stock price reached a new low of $5.40 per share on November 25. And some wonder whether it’s time for the company to be sold, either in pieces or in its entirety.

“Given the number of patents and intellectual property, along with a business that can generally crank out solid cash flow, Imation’s main businesses should not have a negative value,” Amit Chokshi recently wrote in an article posted on the financial Web site Seeking Alpha. Chokshi is an investor and former Morgan Stanley analyst who now runs his own firm, Connecticut-based Kinnaras Capital Management. Imation’s common stock price through mid-December remained near or below the company’s cash-per-share value of $6.21, and well below its current assets per-share value of $19.

Acquisitions that Imation has made in the last five years to help increase revenues and profitability didn’t turn out as planned. Revenues for 2011 are on track to come in just slightly above 2005’s, while losses have piled up in recent years ($34 million in the first nine months of 2011 alone) due to $169 million spent on restructuring charges and $152 million in goodwill impairment costs.

Moreover, investors have given this company plenty of time to discover a viable, long-term identity. Spun off from 3M in 1996, Imation shed most of its original businesses, reduced its 10,700-employee work force by 90 percent, and rolled out various corporate strategies, including a brief stint at trying to become a brand and product management company.

To Chokshi, these facts show the company can’t figure out how to grow as a standalone business—and as such, the best return for investors would be to simply sell it.

But it’s often darkest before the dawn, and Imation president and CEO Mark Lucas is halfway through a two-year turnaround plan that combines a sharply focused product development and marketing strategy with a well-executed cultural change initiative.

His no-pain, no-gain, hurry-up turnaround offense calls for a drop in revenues and an increase in costs in 2011, followed by a bump in revenues and much stronger profit margins by the end of 2012. Given that, the company’s recent financial performance should be about as ugly as it’s going to get. In the quarter ended September 30, sales dropped nearly 10 percent to $309 million, while losses increased to $14 million, compared with a loss of $2.3 million in the same period a year earlier. On the bright side, gross profit margin improved 14 percent during the quarter.

Lucas became president and CEO in May 2010, a little more than one year after becoming president and chief operating officer. During his first year as CEO, he continued shoring up Imation’s operations by, among other things, improving working capital management, increasing cash balances, and speeding up product time-to-market. Then in February 2011, Lucas rolled out the company’s new strategy, which from a product perspective seems to leverage the best of Imation’s past.

While the company has tried to change its product offerings over the years, the ones that continue to appeal to customers are centered around tape—magnetic tape. Not only the product itself, but the market needs for data storage and protection addressed by magnetic tape and its modern-day equivalent, removable hard drives. In larger-scale applications such as cloud computing, magnetic tape cartridges are still used to back up data. In small to midsize businesses, the more nimble removable hard drive is growing in popularity—as are ways to protect and better connect what’s stored on such drives.

3M invented magnetic computer tape, and Imation remains the global leader in this category. It also is the world’s largest producer of recordable optical data-storage media (CDs and DVDs) through its Imation, Memorex, and TDK brands. Worldwide demand for these products—which account for 66 percent of its revenues—is dropping as customers increasingly opt for removable hard drives and USB flash drives. The company plans to expand its capabilities, services, and product offerings in these latter areas.

Imation still sells consumer electronic products under the Memorex and XtremeMac brands. But across the board, Lucas is steering the company back toward its technology roots in digital data storage. And he’s sharpened its focus on helping people and corporations—especially small and midsize businesses—store, protect, and connect their data. Imation is investing in these areas, internally or through acquisitions, when such investments lead to higher-margin revenues. It’s also continuing to reassess other sales lines.

“One thing Mark said when he came in as CEO is that we’re not just going to have revenues, we’re going to have good margins. So we’ve rationalized out of poor margin categories,” says Scott Robinson, Imation’s corporate controller and chief accounting officer.

One example is Memorex televisions, which Imation has stopped selling. “If you look at the prices on these products, they drop so fast that if you don’t have massive scale, you cannot compete,” Robinson says.

Lucas realizes, however, that righting Imation’s product and marketing direction is only part of his challenge as CEO. The other part is finding ways to fire up its 1,165 employees so that they can reach the company’s aggressive business goals. “Our number-one strategic imperative is cultural change,” he says.

Several studies over the last decade have found that organizations with strong corporate cultures, combined with good fiscal management, exhibit above-average levels of productivity, creativity, customer service, profitability, and employee retention. In one study, Towers Watson, the world’s largest benefits consulting firm, determined that a healthy corporate culture with high employee satisfaction is directly related to a company’s financial gain. Others have found great cultures equal high customer satisfaction.
Imation’s emerging culture blends a diverse mix of legacy employees with new hires, and acquisition-related new peers. It respects where employees are working—about 60 percent are outside the United States (as such, the company’s culture can’t be Oakdale-centric). And a healthy culture is championed at the top, not only through Lucas’s management style and beliefs, but by those whom he appointed to his executive team. That team prioritized the company’s seven strategic imperatives when he became its CEO. Number one on the list, supported by and enabling the other six, is culture change.

“The company has gone through several iterations of identity. When I joined a year and a half ago, it was just shifting from being brand-oriented, back to more of its roots as a technology company, and a shift to more of the business-to-business environment,” says Patricia Hamm, vice president, global human resources. “We needed to go from a brand company back to a technology company, and from a restructuring environment to one that was growth oriented.”

Being honest and open with employees was a must, she says. “They know [the company’s largest revenue producing product lines—magnetic tape, CDs, and DVDs] are in a declining market; and to be smart, we had to know where we are going and why. Mark did an exceptional job defining our direction, our strategic imperatives, and the steps to getting there, and we then aligned those messages throughout the organization.”

There also was the need to create a greater sense of urgency, Hamm says: “In a turnaround, you need to move quickly and make good decisions.” Other imperatives addressed the need for more “roll up your sleeves” effort, less aversion to risk, and breaking down silos so that business functions could operate together.

These imperatives are now a part of employee training, communications, and performance management. But their effectiveness relies upon getting every employee to realize that leadership and decision making is his or her responsibility, not just that of managers.

Imation’s legacy culture includes a fair amount of “we’ve always done it this way” and the bureaucratic learned-helplessness that sometimes permeates a work force within a company as large as 3M. Attempts to create an all-new culture since Imation was spun off 15 years ago have been stymied by restructurings, corporate strategy shifts, and new corporate cultures and peers added through acquisitions.

“For new people coming in, it’s exciting,” says an employee who’s been with Imation since the late 1990s. “I’ve watched us go through massive layoffs, get rid of companies that aren’t making money, then focus on brand management, then consumer electronics—which was terribly competitive . . . . So for me, it’s ‘let’s hope this works.’ Either way, we’re going to rally again.”

She adds what she’s seen from Lucas thus far impresses and encourages her and her colleagues.

Employee engagement is manifest, she says. “Our town hall meetings are not just once a quarter, but once a month. And Mark encourages and opens up to questions from those in attendance, both physically as well as from around the world [via live video Webcasting]. Music’s playing. It’s upbeat,” and the meetings touch on wins, challenges, and how the company’s succeeding. People are still a little reluctant to ask questions, “but it’s getting better.”

The company’s executive team didn’t create benchmarks or build in return-on-investment metrics as it developed its culture-change initiative. For now, it’s relying upon employee engagement surveys to monitor its progress.

A survey that Imation conducted in 2010 found three areas of concern, Hamm says. A 2011 survey registered significant improvement in each area. For example, employee confidence in the company’s future changed from 35 percent favorable in 2010 to 53 percent in 2011. Also improved were employee confidence in developing a career within Imation and having the tools and resources to succeed.

“We have a strategy. We’ve documented it fairly well and our employees understand it,” controller Robinson says. “In the short term, the [stock] market probably doesn’t like what we’re doing. But we have new investors coming in who are very excited. A lot of people are interested in the story, and they want to know what our future looks like.” 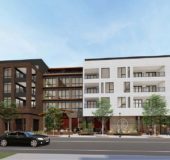 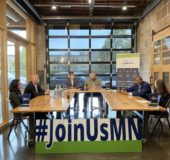 Gov. Walz Makes Business Pitch to “Join Us” in Minnesota 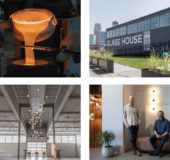 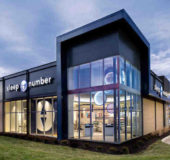