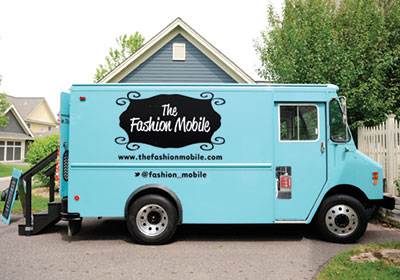 A new form of mobile vending is taking a test drive. David and Teresa Grim are at the forefront, launching the Fashion Mobile in St. Paul. Last year, the couple saw the trend gaining ground in other parts of the country. “We thought, ‘it sounds like a pretty cool idea!’ ” says David Grim.

He proposed selling clothing from a truck last September, and the city approved an ordinance, which took effect in July. At press time, Grim and one other applicant had applied for a license, which allows vendors to sell new merchandise near the Xcel Energy Center.

When not at their full-time jobs—Teresa sells suites for the University of Minnesota athletics teams and David sells cars at Fury Motors—they hawk women’s clothing, purses, and accessories from the Fashion Mobile. David runs the day-to-day operations, while Teresa scouts fashions.

“I don’t think my wife wants me to pick out the merchandise,” says David, “so I’ll drive the truck.”

He compares his overhead favorably to signing a retail lease: “You could probably be in for a quarter of the price.”

After purchasing, refurbishing, and stocking the truck with merchandise, he says he had invested a little more than $20,000. According to the American Mobile Retail Association, which represents mobile retailers in the United States, Grim’s startup costs are typical.

David Grim plans to push Minneapolis to license merchandise trucks, surmising that it will be an easier process since he has already established the framework in St. Paul.