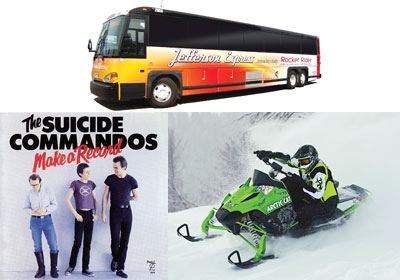 Jefferson Lines is reshaping the image of the intercity bus as “the future of ground transportation.” No longer just the inexpensive option, the bus is the environmentally aware option. In a statement about the Minneapolis company’s new Rocket Rider buses (free Wi-Fi, satellite radio, movies, and extra legroom), Jefferson CEO Charles Zelle says bus engines now are 90 percent more efficient than their predecessors, and buses “are second only to bicycling as the most fuel-efficient transportation choice.” Jefferson has just launched new express service to Duluth, Fargo, Des Moines, and Kansas City.

Manufacturing comes home: Arctic Cat, based in Thief River Falls, will bring some of its snowmobile engine manufacturing back in house after the 2014 model year, taking a portion of that work back from Suzuki Motor Corporation. Arctic Cat will produce the engines at the St. Cloud plant that currently makes its ATV engines. CEO Christopher Twomey says the move will reduce costs and give the company better control of the product. Meanwhile, Minneapolis contract manufacturer Mid-Continent Engineering has a new contract to make ultrasound assemblies for GE Healthcare, winning the business away from a European competitor.

On Premier Guitar’s list of “10 First-Generation Punk Albums You Gotta Have” are debuts by the Clash, the Ramones, the Sex Pistols, and the Minneapolis band the Suicide Commandos. On Burn it Down from 1977, the magazine writes, “guitarist Chris Osgood wielded a black ’52 Les Paul and grinded out some serious overdriven power.” Now, Osgood is vice president of external affairs for McNally Smith College of Music in St. Paul. See him then by doing a YouTube search for “Suicide Commandos Burn It Down.”