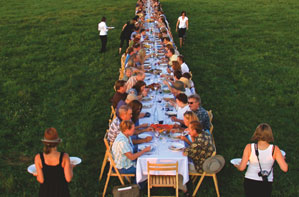 Dining at the source to promote locally grown food.
By Denise Logeland
June 01, 2009

“We don’t want to make this a big educational moment and be preachy about it,” says Scott Pampuch, executive chef and owner of Corner Table in South Minneapolis. Better to raise awareness of Minnesota’s family farms and ways to eat locally by simply sitting people down in the middle of the fertile fields and feeding them.

Tour de Farm will be a series of four multicourse dinners with wine and beer offerings, served June through October, on the acres the food came from. No need for speeches; the food will speak for itself, Pampuch adds. And “anytime you sit down to a meal, there’s going to be conversation”—about shopping at local food co-ops and farmers’ markets, he hopes, or buying directly from farmers.

Pampuch’s partners in the project are local chef-owners Mike Phillips of the Craftsman restaurant, Lenny Russo of Heartland, and J. D. Fratzke of Strip Club, as well as Scott Graden of the New Scenic CafÃ© in Duluth and the families that run Hidden Stream Farm, Star Thrower Farm, Grass Roots Farm, and Cedar Summit Farm. By late April, two dinners had already sold out at $85 per person and 75 diners per event. Details on dates, reservations, and possible additions to the schedule at tourdefarmmn.com.