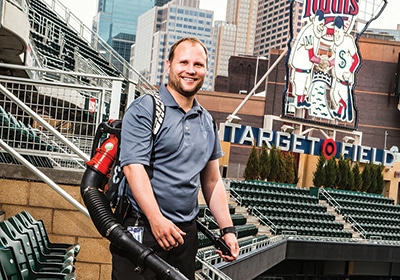 You think your job is difficult? Try having this one.
September 05, 2015

After the final pitch, touchdown or goal, as thousands of stadium seats again stand empty, John Allaire and his team take to the stands—cleaning every row for the next day of athletic action.

Allaire, who works for commercial building maintenance company Marsden, is responsible for the sanitation of TCF Bank Stadium and Target Field in Minneapolis and CHS Field in St. Paul. Combined, the stadiums can seat over 102,000 fans, and there are days when all three stadiums are filled, he says.

“Target Field ends up being a 24-hour operation,” Allaire says; he usually arrives six or seven hours before game-time. His staffers are so skilled at ensuring spotlessness that they’ll “come out of nowhere, clean up a spill and then disappear,” earning them the nickname janitorial “ninjas.” (Allaire’s formal job title is national director of stadium sports events.)

Post-game cleanup tends to start in the premium areas, while another work team sorts through the trash for recyclables, and hoses floors and hand-wipes the entire seating areas. Shifts can last as long as 14 hours, or however long the job takes to complete. “A double header is one of the toughest times,” says Allaire; and after a Kenny Chesney concert, “the amount of beer sold was so shocking” that it took two days to compact and remove trash from Target Field.

Workdays tend to be as intense as the home team’s schedule, while rewards come in the form of a hard-earned paycheck and a daily MVP recipient. “That person gets to hand out a baseball to a kid,” Allaire says. “It’s kind of a win-win for us.”