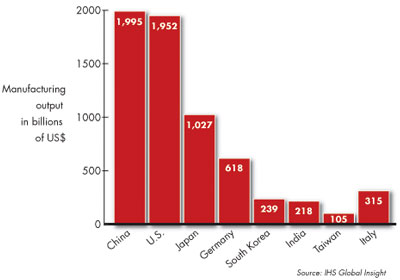 On net, manufacturing is generating jobs once again after a long slide, with more growth likely. Stinson cites one overarching reason: productivity gains, driven partly by innovation. “Productivity will be the key to manufacturing growth in the next decade,” he says.

Minnesota manufacturers reached their zenith by the measure of jobs in May 1998, when employment peaked at 398,800. Then came a sustained pounding, with the bottom, 288,000 jobs, finally arriving in January 2010. By May this year, employment had crawled back up to 296, 200. Meanwhile, from 1998 through 2010, Minnesota’s growth in manufacturing output has easily outpaced that of the U.S.: a 42 percent increase for the state versus a 25 percent increase in output nationally.

Productivity gains can dampen job growth, as when more efficient equipment replaces workers, notes Steve Hine, research director for the state’s Department of Employment and Economic Development. But “technological advances are often a matter of survival” for companies, he says. Stinson says that resulting improvements in quality enable manufacturers to boost their prices, develop further innovations, and ultimately grow.

Here, a look at how three Minnesota companies are doing just that.

The future is 3D printing.

3D printing has the potential to “reset the economics of manufacturing” and “decentralize the business completely,” said the Economist in a cover story last February that cited Stratasys (“Print Me a Stradivarius”). Also called “additive manufacturing,” the technology is used to create objects layer by layer. It can dramatically lower the cost of product design, prototyping, and mass customization.

In the system that Stratasys (Nasdaq: SSYS) developed, a computer file of an object’s “blueprint” is manipulated on screen and the design is refined as needed. Meanwhile, plastic filament, heated to a semi-liquid state, sits ready in an extrusion head. Once the user hits “print,” the tool moves, guided by the design file, and deposits the plastic in layers as fine as five one-thousandths of an inch thick. Objects up to two feet by three feet by three feet can be “printed” in this way using a desktop-sized printer.

Engineers buy Stratasys printers (priced from $15,000 to $500,000) to validate their designs prior to production. Manufacturers buy them for runs of fewer than 5,000 items. Stratasys, which acquired New Hampshire–based competitor Solidscape in May, is using its 3D printers to make, among other things, parts for more 3D printers.

The future is machining at microscopic levels.

Top Tool, with just 30 employees, is one of only four contract manufacturers in the United States
using a Swiss-made machining center to execute a pioneering process: slicing through materials using wires that are less than a quarter of the thickness of a human hair; they can produce parts that are just as small.

Sparks jump from the electrically charged wires, which melt steel and other metals, slashing through them like knives through butter. There is no forcing, no burrs or irregularities are produced, and the cut surfaces are continually flushed with water to prevent scrap particles from interfering with precision.

Top Tool, a 45-year-old business, has long produced dies for basic tools, such as paint scrapers. But the company faces numerous rivals abroad for that work. Top Tool’s new “wire electrical discharge machining,” or EDM, process enables it to compete in new markets for ever-smaller and more sophisticated parts. The company can now produce parts for medical implants or cell phone connectors, objects so small that in some cases it takes a microscope to make them out.

The new machining center creates dies and prototypes that customers can then use to turn out parts. Now Top Tool wants to make customers’ parts for them as well.

The future is moving Precision tools to the work, not Vice Versa.

PaR beat out 10 rivals to land a multimillion dollar contract to develop a “Nacelle Automated Drilling Machine” for Lockheed-Martin’s F-35 Joint Strike Fighter. The aircraft is part of the stealth fighter family that is estimated to be the world’s largest defense program.

PaR’s robotic drilling system is a major link on Lockheed’s F-35 assembly line in Georgia, which became operative early this year. The tool was designed to reach deep into the nacelle—the housing that holds the aircraft’s engines—then drill holes from the inside outward. That tight access imposed significant limitations on the design of the drilling head.

Even more challenging, the drilling machine had to be relocated from one work station to another, yet be fully secured to each station when operating. PaR, which specializes in automation and material handling, integrated a large transport crane with the drilling system to hoist it and deliver it to the appropriate work station. Hydraulic clamps lock the machine to the aircraft assembly, making it stable for precision drilling.

Moving the tool to the work rather than vice versa cuts down on the tooling and fixtures that Lockheed needs for its manufacturing process, uses shop floor space more effectively, and reduces movement of and possible damage to the aircraft components, which makes production of them more efficient. Now PaR is adapting the system it developed for Lockheed to win other commercial and military aviation customers.