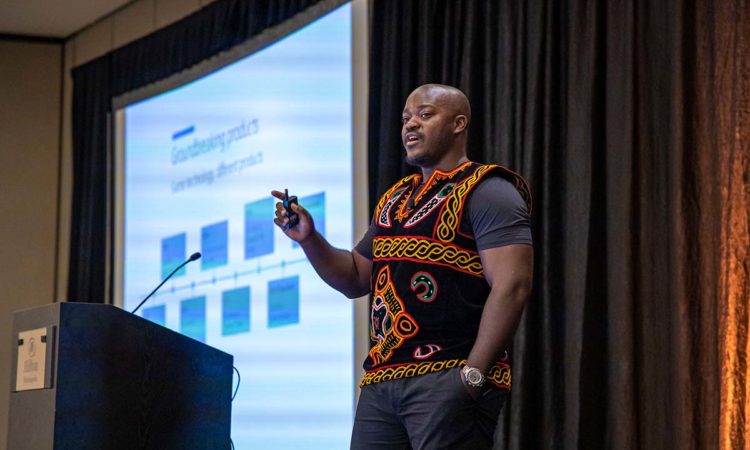 This St. Paul Startup Wants to Change How You Do Laundry

Last month, St. Paul-based HercLeon was named one of the winners of the ‘Million Dollar Challenge,’ an annual pitch competition for entrepreneurs of color. Operated by the Metropolitan Economic Development Association (Meda), the program has distributed millions of dollars to entrepreneurs across the country since it launched in 2018.

With a $200,000 prize package in hand, founder Wenceslaus Muenyi hopes to grow the company and refine its fabrics, which are designed to be used and worn with minimal washing. His long-term goal is to create a “laundry-free future.” In 2019, with the help of a Kickstarter campaign, HercLeon launched its first product, the Apollo self-cleaning shirt. Since then, the company has moved on to facemasks, bedsheets, and underwear. In a conversation with TCB, Muenyi talks about his path to entrepreneurship, and his hopes for the future.

TCB: You’re from Cameroon and then came to Minnesota when you were still young. Why did you decide to stick around and put your headquarters in St. Paul?

Muenyi: My mom moved here—she went to the U of M for college—and then my brother was born here. I ended up going to college in Florida because my sister lives there, but then my mom got very sick. So, when I graduated from college, I came back here to take care of her before she passed away.

My mom had her own company in Minnesota, so I took over the business and was helping my brother run the company for a while, while I had my own company on the side. And I just kind of stuck around.

TCB: What are some of the challenges you’ve faced as a startup founder in Minnesota?

Muenyi: It’s a bit more challenging to get funding up here. But other than that, there’s no problem being in Minnesota; it’s a pretty reliable, safe location for shipping things. And if you want to have a home base for a business – especially a retail business – I think it’s pretty good because there’s a lot of people here who are more open to try new things. You’ll find that many people here have the resources to purchase new things versus other places, like in the south, or even in Los Angeles.

TCB:  How did you come across the ‘Million Dollar Challenge competition? And why did you decide to enter?

Muenyi: I was looking for funding, and I found a guy who was one of the judges in the past years. He’s one of the co-founders of the “Gopher Fund.” I messaged him on LinkedIn, I got a call with him at one point, and he said, “You should apply for the Meda challenge. You have a good chance of winning.” So, I applied, I got in, and won. It was really fun. He really helped me. It was the best 30-minute phone call.

TCB: What did it mean to you personally to have your company be one of the winners?

Muenyi: I think I was just really happy, because a lot of the times you doubt yourself. For the last few years, I kind of was a little shaky on what’s gonna happen, what the future looks like. And now, I’m moving forward with clarity and confidence; I’m not worried about it so much. Today, I think we could easily be the most respected brand in the bedsheet category. Now, it’s not a question of “if” it’s gonna happen; it’s more or less “when” it’s going to happen. And the competition is going to be a critical step towards making things happen as soon as possible.

TCB: On your website, you talk about a “laundry-free future.” Are you motivated by environmental concerns?

Muenyi: If you look at how Tesla does marketing, they’re not really focused on the “eco-friendly” aspect of their cars. They sell high-quality, high-performance cars that “just happen” to be eco-friendly. As much as people don’t like doing laundry, they still think it’s critical. But if we can help them by cutting down how much laundry they need to do, and at the time same time make the process more eco-friendly, that’s the most effective way of going at it. So, like Tesla, I’m less focused on the eco-friendly aspect than I was before, and more focused on being the best possible product out there, which also happens to be eco-friendly.

TCB: What does it mean to for HercLeon to be anchored in the community?

Muenyi: I’m from Africa, and one of the most known African proverbs is, “If you want to go fast, go alone. If you want to go far, go together.” To get anywhere worthwhile, you have to do it as a team. I think it’s very important that we have a community that gives me feedback and helps me to create. Our towels are getting here, and I’ve made four or five versions of towels. The community gives me feedback to improve them—it’s like a two-way street. I look at the comments, the feedback, the reviews, and I work together to make the most perfect product possible.

But it also makes it so much more fun for me because I don’t particularly care about money. I was born very poor. I grew up in a house with 20 people in it, and it was a 1000-square-foot house. I shared a bed with my dad for most of my life and my mom for a lot longer. For me, money is not a big thing—I respect it, but I don’t love it. I do what I do because I enjoy doing it, and I enjoy doing it for good people. And so, the community part makes me motivated to do more.

Generally, I think it’s important that the customer is always right. But if they’re not coming from a good place, then I don’t care to have them as a customer because not every dollar is worth getting. You should care about where the dollar is coming from.

TCB: What’s the next big idea you want to create with HercLeon?

Muenyi: One of the things that makes me cry often is seeing people in wintertime out in the streets by themselves and not having a home. I don’t cry very often, but it gets me every time because one of my best friends growing up was houseless.

The thing I want to release this winter is socks. They’re all-season-altering socks that are designed to keep your feet warm in all temperatures but also keep your feet dry. They’re also antibacterial. It’s my winter plan; they’re expensive to make, but I think one pair of socks would be the best thing for someone that doesn’t have a house—socks that could last them for years. I’ll release them as a nonprofit product.

As far as my main products, I’m trying to keep myself focused on bedsheets because that’s what I think I can make the most impact on. I think no one care about bedsheets—very few companies are interested and enjoy the experience of making bedsheets; they just make it because it’s profitable. But these products can impact sleep and make a difference in a person’s life. There are so many ways you can improve a person’s day just with the material they’re sitting on. And that’s where I’m going to put my energy—behind that message and goal.

TCB: How would you describe the journey you’ve been on with HercLeon?

Muenyi: Emotionally interesting. For most of the journey, it’s been trying things and seeing what works. Just testing, knocking on doors, and seeing if this is the right path. And then, even when I found a path, it was so much inner doubt. I’ve had external people telling me they don’t think I could succeed. And even when things are going well, I still had those doubts. Now, the doubts are gone because I keep seeing things work out in great ways. And I think, why am I moving with such caution? Because if you have to question every step you take, then it’ll be a very long journey. At some point, just move forward. And since then, things just keep working. There’s not as much hesitation anymore.