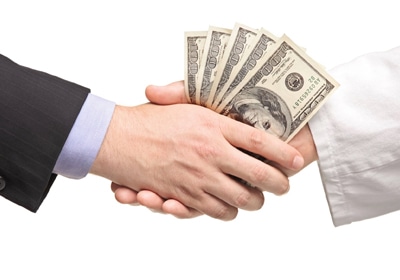 These MN Medical Companies Paid The Most Money To Doctors, Hospitals

The Mayo Clinic was the state’s top earning health institution, taking in nearly $10.8 million from medical device makers and others in the field.
February 15, 2017

Three Minnesota companies were among the top spenders in the nation for payments made to doctors or hospitals for things like travel, meals, gifts, research activities and speeches.

The Centers for Medicare and Medicaid Services (CMS) Open Payments program, a facet of the Affordable Care Act (AFA) intended to provide transparency on financial arrangements within the health care industry, released its 2015 data last month. In it, approximately 1,455 companies reported making payments totaling $7.33 billion to 618,000 physicians and over 1,100 hospitals in the U.S.

Medtronic, which was founded in Columbia Heights and keeps its U.S. operational headquarters in Fridley, shelled out the most money of any company. The world’s largest medical device company reported nearly $250 million being spent on general fees and research activities last year.

The next closest medtech company in the nation was Warsaw, Indiana-based Zimmer-Biomet, which spent just over $176 million.

St. Jude Medical, who was long based in Little Canada until Abbott officially acquired it this January, was the next-highest spender among Minnesota companies. Its 2015 payments totaled about $32 million.

Maplewood-based 3M was the only other local company to have its payments to hospitals and doctors surpass the seven-figure mark. Its spending last year was just shy of $1.1 million.

Among Minnesota’s hospitals that received the most for clinical education and other services, the Rochester-based Mayo Clinic led the pack with nearly $10.8 million received. Other top recipients were Mercy Hospital in Coon Rapids ($2.4 million); Abbott Northwestern Hospital in Minneapolis ($937,000); the University of Minnesota Medical Center in Minneapolis ($818,000); and Children’s Health Care in Minneapolis ($744,000).

Ever since the ACA took effect, the CMS Open Payments program has been the subject of controversy. Upon the database’s official launch in 2014, the American Medical Association (AMA) warned that the system lacked sufficient context to show why individual payments were trading hands.

“Patients deserve to have access to accurate information,” AMA president Robert Wah said in 2014, “and publishing inaccurate information can lead to misinterpretations, harm reputations and cause patients to question their trust in their physicians.”

More information on the CMS Open Payments program, as well as the financial arrangements made between medical companies, hospitals and doctors, can be viewed here.