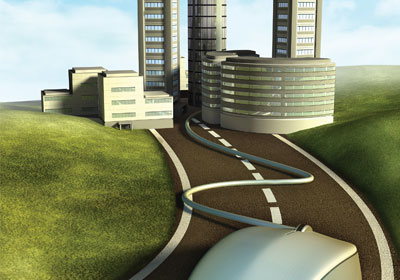 A Minnesota program assists employers in clearing the hurdles to telecommuting.
By TCB Staff
October 01, 2011

When Ecolab began looking at telecommuting as a way to boost the productivity and satisfaction of employees on its information technology (IT) service desk, one of the first resources it turned to was eWorkPlace. The state-sponsored program, launched in 2009, provides incentives, education, and support to Minnesota employers who commit to flexible work arrangements or results-only work environments. Sponsored by the Minnesota Department of Transportation, eWorkPlace also is designed to reduce congestion on metro highways and conserve fuel by convincing more organizations to adopt telecommuting policies.

EWorkPlace experts helped Ecolab think through the technological, cultural, and management issues companies face when instituting remote work policies. Ecolab’s IT services group now has 12 employees who telecommute, some full time and others on select days or shifts, and the pilot’s success led to the rollout of FlexWork, a corporate-wide flexible work policy.

“EWorkPlace provided us with an effective strategy for introducing telework, as well as a good understanding of the benefits and pitfalls involved when employees start to work remotely,” says John Mathews, Ecolab’s IT service desk supervisor.

Technology Challenges
In addition to the issues of managing remote workers and measuring their productivity, companies introducing telecommuting also face a new set of technology challenges. Smartphones, tablets, and laptops are vulnerable to hackers and damaging malware, and corporate data can be lost or inappropriately stored on employees’ hard drives. Also, telecommuters end up doing more of their own technical support. So companies need to be vigilant about ensuring secure communications in these scenarios.

EWorkPlace assisted Ecolab in choosing the best equipment for its flexible work initiative, which includes phones, laptops, virtual private network (VPN) routers to ensure secure connections to corporate databases, and Webcams. The latter enables work-at-home employees to participate in office meetings, and the connection between the router and Ecolab is encrypted for additional data protection.

“All people have to do is plug into their home Internet connection, and they’re ready to work,” Mathews says.

According to Adeel Lari, program manager for eWorkPlace, the initiative helps companies implement, sustain, and accurately measure the results of telework. While eWorkPlace initially offered technology support services to participating organizations through a technology partner, funding for that program ended in June, Lari says, so that assistance is now offered via information on the program’s Web site.

Lari says 48 Minnesota companies participated in eWorkPlace through June of this year, with more than 4,200 employees in those companies telecommuting in some form. Those employers range from small businesses with fewer than 10 employees to the likes of Medtronic, Supervalu, and Valspar. “All but one of the participating companies have reported that they are expanding their flexible work programs,” Lari says.

Another organization using the program is the Hennepin County Human Services and Public Health Department (HSPHD), which provides public assistance, public health, and social services to county clients. The department used an eWorkPlace grant to pay for the consulting services of CultureRX, a Twin Cities–based firm that helps companies create results-oriented work environments, or ROWE, of which telework is usually a component. ROWE is a management strategy where employees are evaluated heavily on performance, not just their presence in an office. (See TCB’s December 2009 feature story on CultureRx and ROWE on line at bit.ly/79jIcn.)

The ROWE initiative is designed to enhance productivity, position HSPHD as an employer of choice by offering flexible work options, and save on real estate costs as the department moves from centralized to regional offices, says Deb Truesdell, ROWE manager for HSPHD. Prior to the initiative, 300 employees telecommuted, she says. The initiative’s goal was to enable half of the department’s 2,700 people to work outside the office.

Telecommuters are given laptops with docking stations, with the only exception being programmers, who require more powerful desktops. While the department once paid for home Internet service for telecommuters, that policy no longer applies, Truesdell says.
“Our agreement is that if you are going to work remotely, you must have access to high-speed Internet,” she says. That doesn’t require employees purchase such service, only that they be able to access it as needed.

Policy requires that staff not store any county information on hard drives, only on its servers, Regenscheid says, but all hard drive data is encrypted as an additional safety step. The county also uses a “locate and recover” service to find any lost or stolen laptops and has a remote data wipe capability that can destroy a hard drive remotely, if necessary.

Work-at-home employees who experience technical problems can phone a central help desk that can assume control of laptops to diagnose and fix problems.

“If employees spend more than 20 minutes on the phone trying to fix an issue and still can’t resolve it, they can bring their laptops into one of several swap sites we have throughout the county and receive a new laptop fully equipped with needed software to use while we fix the old one,” Regenscheid says.

While not all employees in HSPHD telecommute regularly, departmental teams often brainstorm with their supervisors to explore flexible work options. For example, one team of 13 people recorded data on how many public assistance clients visit an office at certain times on certain days throughout the year. Based on that data, the team decided it only needed five people in the office at certain times to interview clients, while the rest of the team could work from remote sites on other tasks, Truesdell says.

Wooing Skeptical Managers
Ensuring efficient and secure data communications is a large piece of telecommuting programs, but it typically isn’t the biggest hurdle companies face when moving to flexible work, Lari says. “The biggest challenge usually is resistance from middle managers,” he says. “They can be skeptical about managing effectively when they can no longer see their people and worried about how to accurately measure productivity in these scenarios.”

“That’s where eWorkPlace played a major role for [Ecolab], not just in providing productivity and performance metrics to initially focus on with flexible work, but in offering counseling around handling pitfalls like the trust factor between managers and workers in telecommuting,” Mathews says.

When piloting telecommuting programs, Lari suggests targeting jobs whose output is easiest to measure, such as customer service or IT support roles. “Knowledge-based work remains more difficult to measure, but we are working with a number of organizations now on how to measure productivity in those telework settings,” he says. “The sustainability of these projects often depends on having good data on their bottom-line benefits.”

Telecommuting not only has been a boon to employee morale and satisfaction at Ecolab, Mathews says, it also has improved his group’s performance on some key business metrics. The IT services group measured a 10 percent improvement in “quick call” resolution and a 16 percent increase in volume of service calls successfully handled following the introduction of telework.

“The latter metric is huge for us, because it indicates our productivity has gone up considerably after starting telecommuting,” Mathews says.

Fairview Health Services, another eWorkPlace participant that implemented ROWE in its 350-employee information technology group, also experienced productivity gains. The initiative’s chief goal was to improve staff productivity, says Rhonda Christiansen, a Fairview IT director, but there also was a belief that staff given more control over their work lives would likely be happier and stay with the department longer.

“We leave it up to individuals and supervisors to determine the best time and place to get their work results,” Christiansen says. “As a result of that, more people naturally started working at places other than the traditional workplace.”

When IT employees were asked whether they thought they were more productive in the ROWE environment than the previous management system, 87 percent of managers and 67 percent of employees answered in the affirmative. The department also measured how many peak-time commuting trips employees made pre-ROWE and post-ROWE, using one week as the time frame.

“We found a 46 percent reduction in trips made after ROWE was implemented,” Christiansen says.

While the primary mission of eWorkPlace is to reduce highway congestion and create environmental benefits, it’s also been a catalyst for helping companies view work in a new light. Many program participants have adopted a renewed focus on exemplary worker results, not just on whether employees put in the requisite office face time and perform at satisfactory levels.

“No one is looked at strangely anymore if they arrive at the office at 10 a.m. in our department, because everyone knows they’ve probably already been working that morning or will work late that night to accomplish tasks,” says Fairview’s Christiansen. “We believe we’re much more productive as an IT organization, and that the flexible work program’s been a success.”