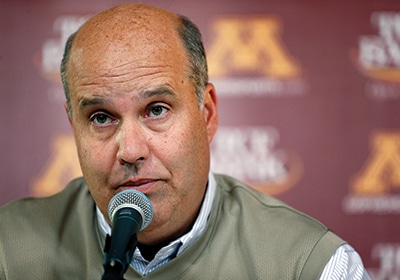 The so-called money sports seem to attract the highest number of scandals.
September 30, 2015

To: Dean Johnson
Chairman
University of Minnesota
Board of Regents
Minneapolis, Minn.

It has been some time since the University of Minnesota theater department staged The Music Man, but luckily the play just finished a run at the Guthrie. I hope you saw it, because “Ya Got Trouble” right here in River City, and that trouble starts with “T,” as in Teague. That’s right. The Professor Harold Hill troupe has once again descended upon the University of Minnesota Athletic Department for its once-every-five-year run.

Norwood Teague announced his sudden resignation (Note an oddity for the athletic department: no severance pay) at the first of last month. His resignation was prompted, so he said at the time, by a single act of inappropriate behavior, the result of too many drinks. My hope is that the board of regents will assume its obligation of running the university and confronting the difficult questions posed by this most recent athletic department crisis.

But first, let’s go back to Norwood. When he first hit the streets of Minneapolis in April 2012, it was reported that one of his alumni-building support practices was to hold cocktail parties at his residence after big games. In fact, no sooner had bachelor Teague appeared than he let it be known that we should engage in a $181 million fundraising effort to build additional facilities to make the University of Minnesota football team competitive. We have heard the “competitive” Harold Hill song before; it’s the equivalent of saying “you gotta know the territory.”

In the last 35 years, to be “competitive” we have torn down one stadium on campus, moved to a domed stadium off-campus (needed to attract the modern football player) and abandoned that stadium to build another one in the open air back on campus (also needed to attract the modern football player). But the sad fact is that in those years—at least as measured by national championships and bowl games (we do not measure it by graduate degrees)—the U of M football program has not been competitive.

My first meeting with Norwood Teague certainly set off my “spider sense” to the point that I remarked to a friend, who is an elected official, that I was concerned that there was something not right about him. Apparently, I was not the only such person.

Additional people have now come forward to indicate that Teague’s behavior was not limited to one incident. A spectacular example was the article penned by the Star Tribune’s Gopher men’s basketball beat writer Amelia Rayno, which sets forth in great detail, complete with text messages, the many ways that Teague sexually harassed her. Other rumors have circulated, and other sportswriters have indicated they expected something of this kind.

The direction of the University of Minnesota and its “brand management” is a matter of governance, not just management. Management, in the case of Norwood Teague, performed abysmally. It is now a time for governance, which can only be provided by the board of regents. Teague apparently has been involved in Title IX-related lawsuits and settlements at previous institutions, and that may account for several of the Title IX lawsuits and federal investigations in process with regard to University of Minnesota athletics. These are failures of President Kaler, which is why the board of regents should seize control of the investigative process.

But they should do more than just investigate the past; true governance is charting a path for the future. We have had over half a century of futility in the so-called money sports of football and basketball, and these are the sports that seem to attract the highest number of scandals. Norwood Teague is but a symptom of forever chasing the Mad Men culture of big-time (but amateur) collegiate football and basketball.

And speaking of Mad Men: I was a bartender during the 1960s. It was a standing joke in our bar that people who got falling-down drunk were the victims of “being overserved.” At the initial press conference where the “single act” of “being overserved” was discussed, I had flashbacks to those boozy days.

There is another model. Minnesota is the State of Hockey. The university is home to four highly successful Division I hockey teams. The most successful Division I men’s hockey coach is Don Lucia, who has run a scandal-free program for 17 years. Comparing how coach Lucia runs his program (and at one-tenth the salary of our football coach)—in contrast to the way the university has run the football and basketball programs—would be instructive to the regents in fulfilling their governance duties.

There is another reason the regents should take on this project. Simply this: If they do not, no one else will, and just as surely as Professor Hill decamps from River City, he and his troupe will once again visit our athletic department.

It is time to dispense with the Harold Hills from out of state. James Carville once told Bill Clinton: “Quit appointing people with names like Zoe and Kimba, and find yourself someone named Jane.” In a similar vein, find a true Minnesotan to be athletic director, chart a new course for the department, emphasize what we are good at, get rid of the Mad Men of collegiate athletics and opt out of the Teague League.

Vance K. Opperman
Proud to Be an Alum and a Presidents’ Club Member