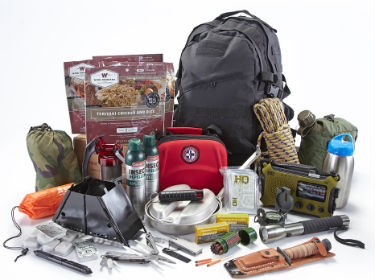 The Sportsman’s Guide Caters to Survivalists With New Products

The company’s new “Bug Out Bag” is a military-style backpack meant to hold a variety of essential items that are also making their debut.
April 13, 2013

St. Paul-based The Sportsman’s Guide hopes to profit from the growing disaster-preparedness trend with the launch of new survival gear that caters to “preppers”—those readying themselves for natural disasters and apocalyptic scenarios.

The company’s new “Bug Out Bag” is a military-style backpack that’s meant to hold items such as fire-starter sticks, solid-fuel tabs, water-filter systems, emergency blankets, and survival beacons—all of which are also making their debut on The Sportsman’s Guide’s retail website and in its catalogs.

Survivalist expert and instructor Creek Stewart worked with The Sportsman’s Guide to design the “Bug Out Bag” and other new survival products.

The “Bug Out Bag” retails for $72.99 to $134.99 depending on the desired color and pattern. Items designed to go inside the bag sell for prices ranging from $7.99 to $139.99. The new items are among about 100 survival products that The Sportsman’s Guide sells online and through its catalogs.

“Our customers have been requesting more urban and field survival tools and essentials so they can be prepared for any disaster, situation, or conditions,” The Sportsman’s Guide CEO Jay Berlin said in a statement. “We’ve put together a dynamic selection of affordable gear for the smart survivalist, made up of items carefully designed to provide relief in the face of adversity, with survival, recovery, and comfort in mind.”

There are an estimated 4 million American “preppers,” and the product launch comes at a time when there’s growing national interest in preparation surrounding doomsday scenarios.

Twin Cities Business’ November cover story profiled Emprimus, a St. Louis Park-based company that has technology to protect the power grid from such a scenario, and explored the growing interest in disaster preparedness.

The Sportsman’s Guide and Emprimus aren’t the only two local companies cashing in on consumers’ interest in disaster preparedness. Another is Brooklyn Park-based Blue Line Gear, which sells a variety of survival-related products and specializes in knives.

Founded in 1976, The Sportsman’s Guide has its roots in sporting goods, ammunition, and shooting accessories. Burnsville-based Northern Tool + Equipment acquired it in December.

The Sportsman’s Guide’s annual revenue totals about $350 million, and the company employs about 700 in Minnesota. Northern Tool + Equipment, meanwhile, is among Minnesota’s 25 largest private companies based on revenue, which totaled $925 million for the fiscal year that ended in July; it employs roughly 2,200