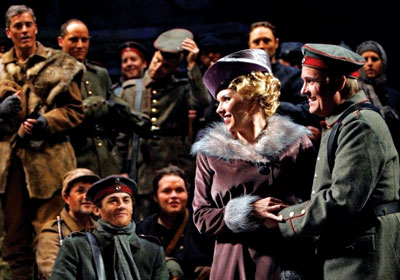 Ponder the most tradition-bound of tradition-bound art forms and opera springs to mind. So what then to make of Minnesota Opera’s SRO world premiere of Silent Night, which tells the story of the 1914 Christmas truce between Allied and German soldiers? It wrapped up a sellout run in late November.

“It’s counterintuitive in the opera business,” says Patrick Dewane, the Minnesota Opera’s vice president of advancement. “New works were historically box office poison.” Not anymore: “We’re doing more than any opera in the country, but [new works] are doing well all over.”

At a time when the Minnesota Orchestra is running large deficits, the Opera is stable and regards new works as part of staving off creeping fine arts obsolesence. Silent Night is part of a seven-year, $7 million commitment to present original works, including three world premieres.

The Opera got the message in 2007 when its first world-premiere production, The Grapes of Wrath, drew big crowds. “So we decided to go all in,” Dewane explains. “But you still need the right subject matter and the right artists.”

New works have been viewed as risky in the opera world because they generally cost twice as much to produce as an old standard. “There are rights to obtain, and the performers don’t know them, so there’s a learning curve,” says Dewane. The Opera has borne the cost via a New Works Initiative fundraising campaign, which has brought in $6 million to date. Much of that money has come from outside Minnesota, with the Mellon Foundation in New York and the Seaver Institute in Los Angeles providing large donations.