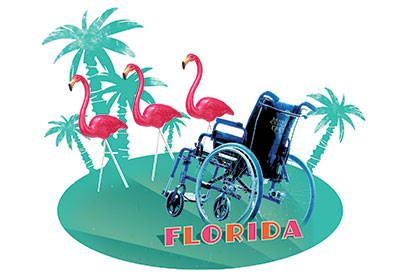 Spend any time in Rochester, particularly near the city’s sprawling Mayo Clinic campus, and a peculiar staple of its landscape may turn up—along skyways, near coffee shops, and even en route to airports. Vacant Mayo-issued wheelchairs get around.

“Good luck counting them and finding them all in one place,” says Mayo’s Ralph Marquez, the Mayo staffer responsible for wheelchair retrieval.

Marquez estimates that Mayo’s Rochester campus loses as many as 150 of its fleet of 1,180 wheelchairs each year. At a cost of $550 per wheelchair, that’s a loss of $82,500 annually. “This is the business climate we’re working in,” Marquez says. “We have an open campus; stuff just moves.”

Among that “stuff,” more than anything, are wheelchairs. Marquez tracks them using a computerized inventory system and sets inventory levels on the low end of how many are needed on-site to start the day. That number is 950 wheelchairs.

Each Mayo wheelchair has an ID tag with a phone number to contact Mayo. A courier service, which includes Marquez and occasionally Mayo door attendants, uses a Mayo-issued van to grab others around town. Calls have come from downtown Rochester businesses, the city’s public library, and airports as far away as Orlando, Fla., and Denver. By that point, Marquez says, it isn’t cost-effective to try to get the wheelchair back. However, when one wheelchair ended up in Duluth’s airport, a local transportation company making its way south returned it for free.

Why go through the trouble—and cost—of tracking down wheelchairs rather than limit them to the hospital or charge a fee? For one, Marquez says, the costs are relatively small in the big picture—Mayo Clinic reported more than $9 billion in operating revenue last year. Mayo’s Rochester campus employs 33,000 employees, and Marquez says the roughly $82,500 in lost wheelchairs amounts to less than two full-time employee salaries.

Impose a fee, and it gets tricky.

“If you’re in the patient care business, you’ve got to be careful with [fees],” Marquez says. “The logistics of charging would be a monumental task.”