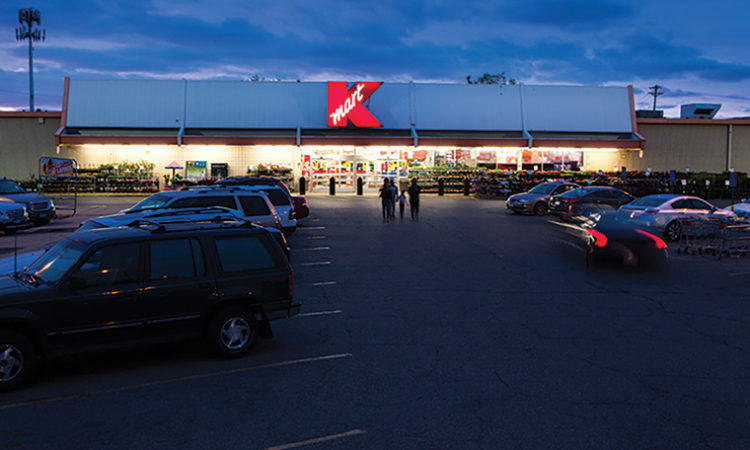 The Kmart the City of Minneapolis Wishes Would Go Away

Illinois-based Sears Holdings Corp., parent of Sears and Kmart, has closed nearly 60 percent of its stores since 2013. In January 2017, the company announced closings of 108 Kmarts; this January it axed another 64.

But through it all, the least-loved Kmart thrives. It’s the one holding up the redevelopment of Nicollet Avenue, the one at the intersection of Lake and Nicollet, one of only five Kmarts left in Minnesota.

The Kmart opened in 1977 when the city allowed this strip center to vacate a block of Nicollet Avenue—a planning decision Minneapolis has been working to unwind for most of the last four decades. The city is now Kmart’s landlord, after paying $8 million last November to buy the land. The city also spent $5.3 million in 2015 for the adjacent abandoned grocery store. A city press release says it wants to see “mixed-use, multi-story development” on the 10-acre swath of land, but it also wants to reopen Nicollet as a through street, which means reorienting the structures on the site.

Sears Holdings does not discuss the performance of individual stores, but confirms its NicLake store does good business. “As has been the case for many, many years now, this is a successful store, and we continue to serve our [customers] in the surrounding community,” says spokesman Larry Costello.

From the curb, it does not look like retail paradise. A vast surface parking lot is mostly embraced by gulls and pigeons. The adjacent grocer closed in 2014, and its eyesore building sits vacant. But one veteran local retail real estate broker says Kmart thrives for a reason.

“It’s good real estate,” says Mike Sims, principal with Mid-America Real Estate-Minnesota. “It’s in that very densely populated, tough-to-penetrate corner of Lake Street. . . . They’ve got a pretty captive audience there. There’s a significant void for grocery and general merchandise.” (The nearest full-size Target store is two miles east.) And Kmart has a lease that runs until 2053. It doesn’t want to budge without a new store on-site to replace it. Years of discussions between the city and Sears Holdings have apparently borne no fruit. The stalemate may drive urban planners crazy, but this is one decaying big-box store that does not seem to be suffering like its peers.