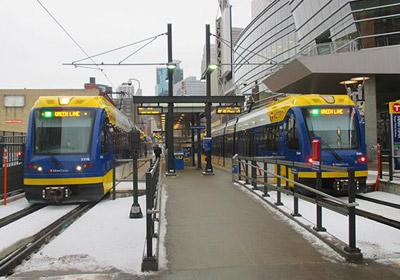 The Green Line Is Finally Getting (Slightly) Faster

Come March 9, the time it takes to travel via the Green Line train from Target Field Station to Union Depot will shrink to 45 minutes.
February 27, 2015

Come March 9, the time it takes to travel via the Green Line train from Minneapolis’ Target Field Station to St. Paul’s Union Depot will shrink to 45 minutes.

That may not be a big deal compared to the current schedule time — 48 minutes — but for a system that drew more than a few initial complaints about being slow, it’s a move in the right direction.

And Metro Transit officials say the line's trains are also getting more punctual. In the first months of operation, measurements of “on-time” performance for the Green Line hovered around 50 percent. During December and January it was 85 percent, said Brian Funk, director of Light Rail Operations.

Several things have happened to make tightening the schedule possible. First, by working with St. Paul Public Works staff, Metro Transit has massaged the system that syncs trains with traffic lights on University Avenue to move things along faster. Unlike on the Blue Line, where trains preempt traffic lights, the Green Line depends on “predictive priority” software that tells upcoming lights of the train’s arrival time, a system that is working more effectively than it did initially.

The tighter timetables will also take out the slack that's now in the schedule. Trains are currently getting to stations sooner than the timetable predicts, causing operators to sometimes stop between stations to get back on time. That down time is being taken out of the schedule, Funk said.

“We want to keep the system moving so we don’t have trains with people on them waiting between stations,” he said.

The Green Line, which began taking riders in mid June, carries an average of 33,500 riders per weekday. That is for a route that runs for 11 miles and stops at 23 stations.

As regular riders know, there has been a difference between the printed schedules and actual times. Before the Green Line started carrying paying passengers in mid-June, test runs were taking longer than an hour to get from Union Depot to Target Field, longer than existing bus routes. Metro Transit officials promised that those times would be reduced as the system and signals were tweaked. But trips were taking far longer than earliest estimates of 39 minutes, which were made before three additional stations were added in St. Paul.

Early complaints were targeted at St. Paul cross-streets: that too much time was spent at red lights that could and should be switched green for the trains. (A Star-Tribune editorial came with the headline: “The Green Line Needs More Green Lights.”) St. Paul Mayor Chris Coleman responded with an op ed that said city and Metro Transit engineers would continue to work to reduce travel times. But Coleman wrote that the Green Line was never intended to have full signal preemption. Instead, it was to have signal priority using in-track detectors.

“Traffic volumes on the major cross streets in St. Paul were higher than they were along Hiawatha Avenue in Minneapolis,” Coleman wrote. “There were many more pedestrians wanting to get back and forth across the street. And, most important, the technology existed to create a system that would give the train the priority it deserved without throwing the entire signal system out of coordination.”

There have also been promises to not allow trains to always trump cars and especially walkers, the mayor said. “We reassured residents that their neighborhoods would continue to be wonderful, pedestrian-oriented place to live that they would be able to get back and forth across University Avenue as they always had,” Coleman wrote.

That signal system was adjusted first at three intersections: Victoria, Chatsworth and Grotto. Additional adjustments were made at other lower-volume intersections to make the “predictive priority” system work better, Metro Transit said at the end of 2014.

The most-noticeable delay for westbound riders of both the Green and Blue lines won’t be changed by the new timetable. Funk said trains may continue to have to wait at the point that the two lines come together for the westbound trip into downtown Minneapolis — between Cedar-Riverside and Downtown East on the Blue Line and between East Bank Station and Downtown East on the Green Line —  in order to, as the in-train announcement says, “establish the proper spacing between the trains.”  Only when a train has left Downtown East can the next train proceed toward the station, Funk said.