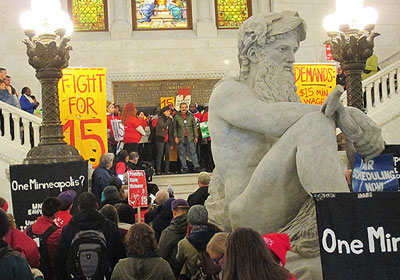 The First Hurdle For Sick Leave Policy In Minneapolis: Agreeing On Who Should Study It

The city council wants a "partnership group" of 15 residents to study paid sick leave. Now comes the hard part: deciding who should serve on the panel.
November 22, 2015

The Minneapolis City Council is trying to prevent its method for resolving conflict over a proposed sick leave ordinance from becoming a new source of conflict.

A decision to retreat from a batch of ordinances known as the Working Families Agenda recently resulted in the creation of the Workplace Regulations Partnership: a group of 15 residents who will be asked to study paid sick leave and report back to council by the end of February.

The hard part, however, might be agreeing on who will serve on the work group. Under its rules, Mayor Betsy Hodges will appoint three members, Council President Barbara Johnson will appoint two and the full council 10 more. Yet the group is somehow also supposed to include a balance of people representing various constituencies — employees, low-wage employees, organized labor, large employers, small employers, immigrant-owned businesses and representatives of business groups and associations.

The appointment process is being watched closely — and even lobbied — by activists and interest groups on both sides. Even before the work group was approved last month, there was grumbling from various quarters about its makeup.

Some council members — perhaps wary of the notion that the walk back of the Working Families Agenda seemed like a victory for business interests — wanted to reassure labor and worker-rights activists that the process going forward was going to be fair.

“I think it is very reasonable to suggest that a work group focused on workplace standards for workers contain half workers,” said Council Member Lisa Bender, who offered an amendment to require that the group was divided equally, with seven worker representatives, seven business representatives, and a public health expert as the 15th member. That proposal was defeated, however, as was one by Council Member Alondra Cano, who wanted to require the work group to have two co-chairs, one from each side.

“I don’t think we should be setting up a dynamic where people are at odds with each other,” Goodman continued. “The whole point of the partnership is to bring people together.”

And later, Goodman added: “I think the fact that we’re micromanaging the heck out of this thing says something about the incredible division amongst us.”

The council was forced to revisit the issue last week during an explanation on how city staff would deal with applications to serve on the work group. While the group’s members will not be covered by the city’s standard appointment process, the council will use it as a template — with a few exceptions. First, formal rÃ©sumÃ©s are suggested but not required, as not all people have rÃ©sumÃ©s on hand. Second, applicants must note which of those so-called “stakeholder” groups they represent. That is, are they a worker or an employer? Is their business large or small? Or as Council Member Jacob Frey described it: “What side they are.”

The resolution establishing the work group, which was passed unanimously by the council, appears to require that all 15 members be identified with one of the groups. So if the council thought it would be good to have someone with, say, experience in employment law, as Frey proposed, or with a background in public health, as Bender suggested, they would also have to be associated with one of the named groups or segments.

“We’re already getting a large number of interested folks, and I’m sure it will be a hard decision for all of us to make,” said Council Member Elizabeth Glidden.

Bender called for the people appointed to be open-minded on the subject. “We have a lot of folks in our business community who are open-minded about paid sick time and are employers who already provide paid sick time, and I hope that as we consider the 10 individuals that we submit to this, we keep in mind that the purpose of this group is to shape and propose a policy for us to consider,” Bender said.

“My biggest concern here is that both sides are just going to be beating each other down, and I do want people who are open-minded generally,” she said.

Glidden said the process shouldn’t be about appointing supporters and opponents “and having them duke it out in the committee.”

Glidden, the chair of the council’s committee of the whole, which is handling the issue, said she isn’t expecting the 13-week process to end with a vote of “let’s not do anything.”

“I have an expectation where we’re not asking for a product where … the committee votes and they say, ‘Well, just don’t do one at all,’” she said. “We’re asking for something different. We’re asking for a recommendation on ‘what’ and the question of ‘how specific’ is also important.”

Moves fail to quiet advocates
Those interested in the issue — including organized labor, community activists, business associations large and small — are continuing to work the council and the public. The Minnesota Restaurant Association hired onetime City Council president Jackie Cherryhomes to lobby the council on its behalf.

Worker-rights activists highlighted the hiring as proof that the association wasn’t entering the process with an open mind. But there has been attempts to staff up on the side advocating for paid sick leave as well. The Main Street Alliance, a national, progressive small business group, recently sent a staffer to Minneapolis to work on the issue, and Working America, the community affiliate of the AFL-CIO, posted an ad on Craigslist last month for field organizers to to work on paid sick leave.

Cherryhomes was council president until 2001, when she lost her re-election bid in a close race in the city’s Ward 5. She has been lobbying at the local and state level since at least 2004, according to her registration with the state.

While both the restaurant association and the Minneapolis Regional Chamber of Commerce welcomed the suspension of work on the paid sick leave issue until the city’s work group could study it, both have said they are not in favor of requiring employers to offer it. Instead, both organizations have said they favor creating guidelines that businesses would follow voluntarily.

On Tuesday, a large march for worker rights ended at City Hall with a rally in support of a $15 minimum wage, fair scheduling and sick leave. Marchers were also there to two support two other labor actions: a national fast food worker strike that was staged on Wednesday, and a Twin Cities janitors strike against companies that clean some of the region’s largest stores and offices.

Minnesotans for a Fair Economy, one of the main groups advocating for paid sick leave and the Working Families Agenda, is also launching a regional effort to make worker rights an issue in the 2016 elections, and to reach out to residents who make less than $15 an hour but who are not yet registered to vote.

By occupation, those in service occupations are least likely to have paid leave, just 29 percent. And fewer than one-third of workers earning less than $15,000 annually have paid sick leave, while more than 80 percent of those earning more than $65,000 have the benefit.

The report’s author, Jessica Milli, said the percentages are similar across Minnesota.

What do the polls say?
A recent KSTP/Survey USA poll of 600 voters across the state found that 48 percent favored requiring paid sick leave, with 39 percent opposed — despite the fact that the question was asked in a somewhat less than neutral way: “Should government be allowed to require paid sick time be offered by private employers?”

National polls — and those conducted in cities that have already implemented paid sick leave laws —generally show strong support, as well. A study of Seattle businesses by University of Washington researchers, for example, showed that 70 percent favored the law one year after it was implemented.