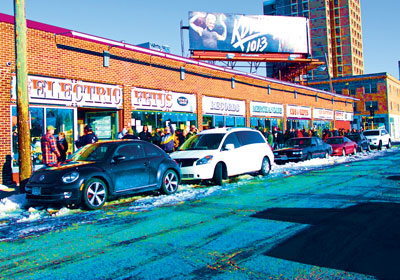 The Electric Fetus Prospers Despite The Digital Revolution

How the record store is competing against free.
November 01, 2013

Even in a city that boasts more than 20 independent record stores, Electric Fetus owner Keith Covart says his competition isn’t the other retailers, but the proliferation of digital downloads. “We are competing against free,” he says, laughing. But so far, the difference in sound quality of CDs versus compressed-file MP3s is still great enough to keep some music lovers buying.

In the quickly changing music retail industry, staying relevant includes connecting with music fans by hosting dozens of in-store performances by national and local artists every year. The annual Record Store Day, which includes several in-store performances, is the Fetus’ top sales day of the year—twice that of Christmastime.

At Covart’s Minneapolis store, two-thirds of sales come from the music department, which includes not only CDs, LPs, and (believe it or not) cassette tapes, but also headphones, and magazines. The gift department (jewelry, clothing and hats, and novelty gifts) accounts for the remaining third. In Duluth and St. Cloud, music and gift sales are split 50/50.

When CDs first came out, Covart started selling the same albums to customers on CD that they already owned on LP. Now, those same people are wanting that music on vinyl again, as the medium has seen a revival for what some consider better sound.

Covart credits the Fetus’ staying power to its extensive selection—curated by a staff that includes several people who’ve been there four decades. “We sell a lot of older-catalog products, deeper catalogs than any of the big boxes,” he says. The selection is always growing—every Tuesday the Minneapolis store receives an average of 200 new releases. Now 45 years in, Covart is handing the reins to his daughter, Stephanie Meyerring, and son-in-law, Aaron Meyerring. Any subsequent changes are yet to be announced. Even so, says Covart, “it’s already more youthful, there’s more energy.”