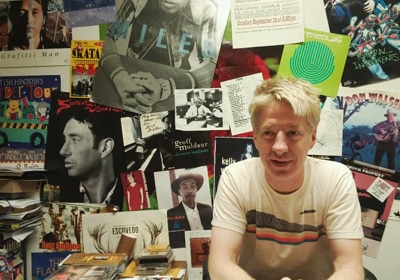 Bob Fuchs in his The Electric Fetus office.

The Electric Fetus: A Store that (Rocked and) Rolled with an Industry’s (Ebb and) Flow

A look at what’s shaped and now defines an iconic Minneapolis record store, in honor of its 50th anniversary celebrations.
By Amanda Ostuni
June 07, 2018

Minneapolis record store Electric Fetus is celebrating its 50th anniversary. It’s a significant milestone for a store that in the five decades since it was founded in 1968 has become iconic, even beyond its Minnesota roots.

Eric Foss, owner of Minneapolis record label Secret Stash Records – which has worked with the Fetus to release Stash-produced reissues of old records and local artist original records – believes it’s the most recognized record store of the Twin Cities.

“We’re blessed to have a bunch of great shops in town but if you talk to shop owners, other labels [all over the world], Fetus is the one that comes up first in conversation pretty much 100 percent of the time,” said Foss. “It’s part of the social fabric… the identity of the town.”

The Fetus’ journey to such esteem has involved building moves and expansions, and changes in music trends and shopper demographics – all while the business expanded into Duluth and St. Cloud, though St. Cloud was shuttered in 2014.

These changes – along with highlight moments like Beatles’ legend Ringo Starr wearing an Electric Fetus shirt at the 2010 Grammy’s – are part of the store’s legacy as is it stands today.

Adapting to an inconsistent industry
The Electric Fetus – now owned by Stephanie Covart, daughter of Keith Covart, one of the original founders, and her husband Aaron – began as a response to what the music industry lacked: a place to buy records that weren’t just the mainstream offerings at chain stores. 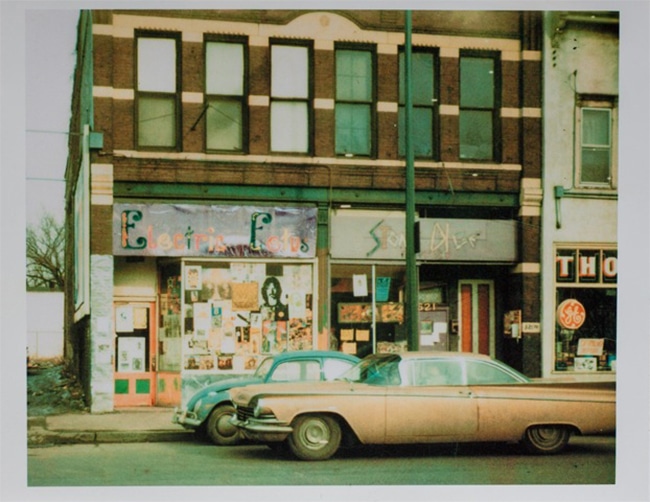 Fetus storefront in 1968 at its original location on Cedar Ave

“It was a bunch of hippies who wanted to do what they loved – and they loved music, so it was a tiny store with a small inventory,” said longtime Fetus manager Bob Fuchs. “They were selling [artists] that were not easy to find sometimes… things they were personally interested in.”

The ‘80s were the initial peak for records, said Fuchs, so the Fetus – having moved from the West Bank to its current location on 4th Avenue and Franklin – was stocked primarily with records. Cassettes had their day, too, but then CDs took over everything from 1987 to 2001.

Instead of carrying mostly records and just two bins of CDs, Fetus dedicated 120 bins to CDs and just 2 to records during the late ‘80s and ‘90s. Then came the internet.

CD sales dropped as people began consuming music digitally instead. Additionally, rather than a few large labels controlling the production of records and CDs, artists could do it themselves, and they often opted to not put out any physical copy of their work at all.

Cassettes clung to life, according to Fuchs, because indie rock bands relied on them as a cheap way to sell their music and fund tours. Today, Fetus has a table of about 700 cassette titles.

Records, meanwhile have returned in force as CDs have fallen by the wayside. Fuchs said they’ve shed 50 bins of CDs and added 43 bins of records over the last 15 years. The resurgence began in about 2006, said Fuchs, and was boosted by the first Record Store Day in 2008. Fuchs said they were surprised when 100 people showed up that day for limited edition LPs.

“We’re like, ‘oh they’re onto something here, people will respond, people do still care,’” said Fuchs, adding that this year Record Day drew 550 people to the store at its opening hour alone.

Fuchs credits the revival to a digital burnout – people want something tangible and more engaging, and are realizing the merits of older formats over the bells and whistles of digital.

“A tape or an LP or a CD is a nice stamp in time with the artwork and lyrics and information included in the liner notes, the band members, all that,” said Fuchs. “I think it’s a deeper experience and I think that is enjoyable for many people.”

Fuchs said as the resurgence appears to stabilize, records remain at the core of the Fetus’s business, along with its section of novelty items – which is doing better now than ever, and has historically been a consistent reliable revenue source, especially through the music industry changes.

Foss of Secret Stash said the Fetus’ success with adapting to those changes helped it survive.

For his part, Fuchs thinks the key to the store’s longevity has been its customer service.

“It all comes down to service… giving people what they want, but actually doing it in the proper way,” said Fuchs. “Don’t take people for granted.”

The store has also been defined by its physical changes.

Fetus in flux
The Fetus moved from its original to its current location around 1972 but only into about a quarter of the building at first. Then in 1995, the Fetus bought out the whole structure, doubling the store’s retail space. Fuchs said that’s when business really took off.

He said that more square-footage naturally meant they could cater to bigger crowds, so they added more mainstream music offerings, though indie records remained a staple.

“People can fill out Target Center and we’ll sell four [of that artist’s records] and our artists that sell out First Ave, we can sell 800,” said Fuchs. “It’s always been a little bit that way here. There’s a lot of people in this town who aren’t just about the Top 40.”

The expanded space also allowed them to cater to more unique markets. Though Fuchs said it’s not as substantial now, at one point, the Fetus had a significant international selection and was one of few places people could go for such fare. Their diverse collection helped attract diverse fans, and to this day, Fuchs sees a broad mix of people at the store.

That mix includes elderly and young people, especially more young women coming in than Fuchs has ever seen. He said the record resurgence has been a driver of that influx of new, younger blood, as parents are getting their surprisingly receptive kids into records.

“Our generation didn’t want much to do with our parents’ collections… those easy-listening records, string orchestras,” said Fuchs. “Now [parents have] The Beatles and the Stones and The Who… this generation wants their parents’ turntables and records, which is fun to see.”

Intertwined with the Fetus’ expansion and shifting demographics is the change in its look. Fuchs said when he started, the smaller store was dark and dingy. Now, the store is clean, bright and open, eschewing the more stereotypical ‘60s-style “den of iniquity” look of a record store.

Fuchs said the Fetus’s current aesthetic hasn’t pleased everyone, drawing the ire of some music fans who expect a record store to have that grittier vibe. Foss adamantly defends Electric Fetus against such complaints.

“If anyone says the Fetus is a sellout because they tried to make it nice, screw that,” said Foss.

While he appreciates grungy stores, Foss is glad the Fetus is somewhere he can bring his wife – or anyone – and they feel comfortable there. Fuchs said that inclusiveness has been intended since day one.

“We wanted to have a welcoming feel to the store so that everybody would feel welcome,” he said.

Party plans and future features
The 50th anniversary festivities include special merchandise on sale – even a copy of an owner-commissioned commemorative art piece; an in-store appearance by Bobby “Z” Rivkin, the original drummer for Prince’s band and member of The Revolution; and a concert at First Avenue on June 9 featuring the band Real Estate. Fuchs said a few hundred former employees and loyal customers are coming from out of town for the celebration.

“It’s just a big milestone. Many businesses don’t make it to 50 of course,” said Fuchs. 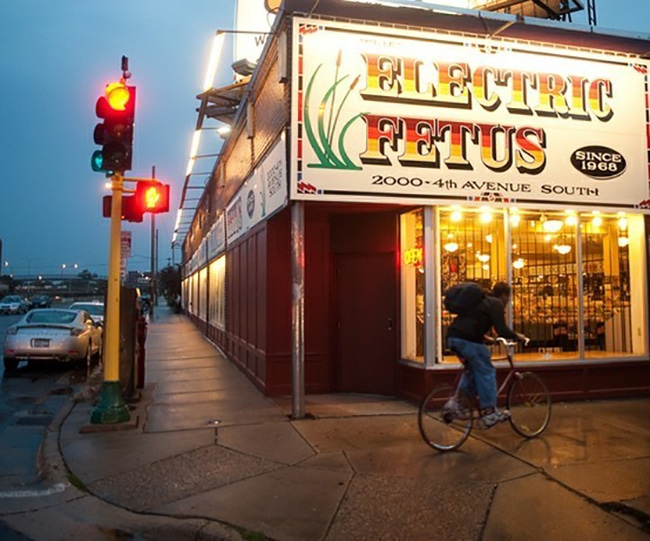 He added that thoughts on what comes next for the Fetus are on hold right now, due to the construction project on the bridge in front of the store, which has been ongoing since last September and has noticeably hurt business.

When asked to look past that problem, though, Fuchs noted the store has a dedicated following and the record business has been steady, but uncertainty regarding the music industry still abounds.

“Every other year seems to bring a major revolution or evolution to the business,” said Fuchs. “So, we’re crossing our fingers that the kids still like vinyl going forward.”

Foss, for one, would like to see the Fetus stick around.

The Electric Fetus's Best Selling Records of Each Decade