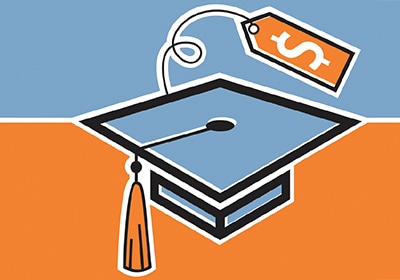 With high tuition costs and a competitive job market, choosing a college program is tough. But a new state website gives students and parents more power because they can see which industries are hiring and how much new graduates are getting paid.

People in powerful positions often have access to the best information.

Minnesota high school students now have the ability to expand their power base. When they are agonizing over technical school and college choices, they can look at marketplace data that show which academic programs have high placement rates and what recent graduates are being paid.

For the first time in its history, the Minnesota Department of Employment and Economic Development (DEED) is making this information available to the public on its website.

The data reveal a pattern of underemployment among recent graduates. For the Class of 2011, among those completing programs ranging from certificates to graduate degrees, by their second year out of school, only 42 percent had full-time jobs that they kept for a whole year.

But the most intriguing statistics are the wage breakouts among academic programs. Here are some of the highlights for the Class of 2011 two years after completing their education:

Bill Blazar, interim president of the Minnesota Chamber of Commerce, predicts the wage and placement information will be useful to multiple audiences. “It gives the student seeking the training the kind of information they need to make a wise career decision,” he says. “The other thing it does is put some additional pressure on the institutions to change and adapt their curriculum, so that their graduates are going to meet the demands of the private-sector economy.”

Wage comparisons among graduates of certificate, associate’s degree and bachelor’s degree programs have been attracting attention.

When the data are aggregated, they indicate that wages rise along with higher levels of education. But the extensive breakout of wages shows that many recent hires with certain two-year degrees are making more money than some people who have four-year degrees.

“There are families who absolutely have their child going for a baccalaureate,” says Larry Pogemiller, director of the Minnesota Office of Higher Education. “But the student might be happier and more successful getting a certificate or going the two-year degree route.”

“The whole idea here is to use metrics and data to try to figure out what works better,” says Pogemiller, a former state senator. Beyond individual families, Pogemiller argues the data will be helpful to public officials and employers. “This is an example of trying to bring to bear data-based decisionmaking around public investments.”

The Minnesota Legislature passed a bill requiring DEED to take the wage and employment data that the state receives from employers and present it to state residents in a format that’s easy to use. Called the “graduate employment outcomes tool,” people can use drop-down menus on the DEED website to look up wage and placement data by academic program. They can access the tool here.

The state of Minnesota recently released wage information that shows, on average, that people with bachelor’s degrees are earning only slightly more than people with two-year associate degrees. The bar chart shows what Minnesotans were earning in their second year after completing their academic programs. The percentage on the bottom of each bar shows what portion of the Class of 2011 graduates were working full time. Detailed wage information about specific academic programs is available on the Minnesota DEED website. 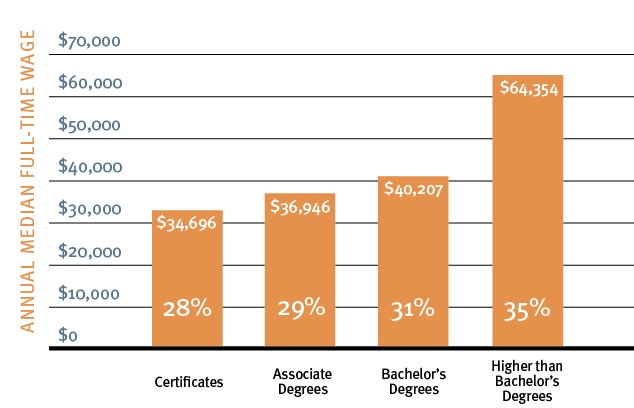 In an era of high tuition, will the release of the accurate wage data discourage students from pursuing four-year liberal arts degrees?

“I don’t read it as an argument for young people not to major in history, English or philosophy,” Blazar says. But liberal arts graduates need to work harder “on how they present themselves to the market on their career path.” When a student majors in history, he adds, they often need to be more deliberate than technical graduates do about a career strategy. They need to have a good answer to a key question, he says: How am I going to use this degree to get myself going in a career?

Based on the data, Blazar says that some students might complete a certificate program after high school and begin working full-time, then pursue associate’s and bachelor’s degrees as their careers are unfolding.

“I think the career paths that young people choose are going to change substantially, mostly because of the job market, the cost of higher education and the larger societal trend where people have more than one career,” Blazar says.

Pogemiller also doesn’t think the data should be used to favor either liberal arts or technical education.

“Right now, this is an employers’ market,” he says. While the new data are valuable in providing insights on starting wages, he notes, “until you look over 10 years, you don’t know whether a person with a certificate ran into a [wage] wall or was able to keep progressing.”

Because most people work for several decades, he says, students still need to look at the occupations they would enjoy as well as identify which offer the highest pay.

He also stresses that the data are particularly valuable to first-generation college students, who lack the social connections of family members or “rich uncles” who’ve already navigated the college landscape.

In today’s job market, there also are many jobs that require a blend of technical skills and the critical-thinking capacity developed through liberal arts courses.

Alessia Leibert, a research project manager, for Minnesota DEED, exemplifies this pattern. She earned a degree in history in Italy and later graduated with a master’s in public policy analysis at the University of Minnesota.

Leibert has written a detailed report for Minnesota leaders about the new graduation outcome tool. “I am applying my statistical knowledge as well as history and historical research knowledge every day on my job,” Leibert says.

In health care and manufacturing, many experts in workforce development talk about stackable credentials. People can begin their careers at low occupational levels that don’t require lengthy training, but later can pursue degrees that build on their previous education and allow them to climb career and wage ladders.

At Dunwoody College of Technology in Minneapolis, academic programs are designed to help students secure their stackable degrees.

For example, a student could complete a certificate program at Dunwoody and become a machine tool operator. Dunwoody president Rich Wagner says that student could then earn an associate of applied science degree to qualify as a machine tool technician. Those undergraduate credits would then position the student to earn a bachelor of science in industrial engineering at Dunwoody.

Dunwoody is a unique institution in the Minnesota higher education landscape. Celebrating its 100th anniversary this year, Dunwoody is a private, nonprofit technical college and it has an endowment.

“The pathway to the middle class requires some education after high school, but that doesn’t mean a four-year degree in all cases,” Wagner says.

In 2012-13, only 41 of Dunwoody’s 340 graduates earned bachelor’s degrees, and the rest earned associate of applied science degrees or completed certificate programs. Robotics and manufacturing had the largest number of graduates among Dunwoody’s seven clusters, with 48 finishing certificate programs, 77 earning associate degrees and nine obtaining bachelor’s degrees.

“If industries are not hiring, our students are not enrolling,” Wagner says, adding that his institution is in close contact with businesses so it can constantly update its equipment and academic programs.

In earlier decades, many students enrolled in college programs with the confidence that they would land good jobs following graduation.

In today’s economy, Leibert says, many students and their parents recognize that the path to a well-paying, full-time job may be very long. In recent job vacancy surveys, a high portion of job openings in Minnesota were for part-time jobs. That’s also the case in many other states.

“This is one of the reasons why the Fed is not raising interest rates because they are seeing that part-time work is still too large,” Leibert says.

Against this backdrop, she stresses the importance of students’ and parents’ access to reliable wage and placement data.

“If a student goes into debt to pursue these degrees, it’s important they realize what awaits them,” she says. While many institutions release statistics about their graduates, she says those surveys rely on self-reporting by students, and those who don’t land jobs in their fields often choose not to respond to school surveys.

“For us to be a competitive state and drive economic development, we need to have the workforce,” Wagner says. He emphasizes that good marketplace data help educational institutions align their programs to meet the demands of businesses.

By shining the spotlight on the wage and placement information, Blazar contends it will provide a greater incentive for educational institutions to adapt their curriculums.

“There are some people who have a strange view that the technical colleges are subsidizing business,” Blazar says. “That is fundamentally wrong, because the purpose of the school is to teach the student the basics of a profession.”

Once new graduates are on the job, Blazar notes that virtually every company provides additional training on how to do the job in the specific workplace.

“As baby boomers retire, we will have a shortage of people,” Pogemiller says. So he anticipates the DEED employment information will become even more valuable for students, parents, employers and higher education institutions. “It’s a positive use of big data.” 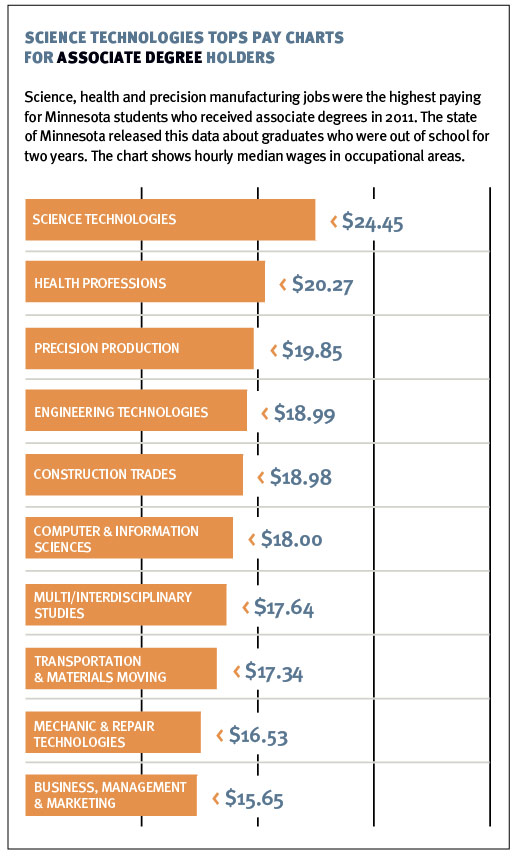 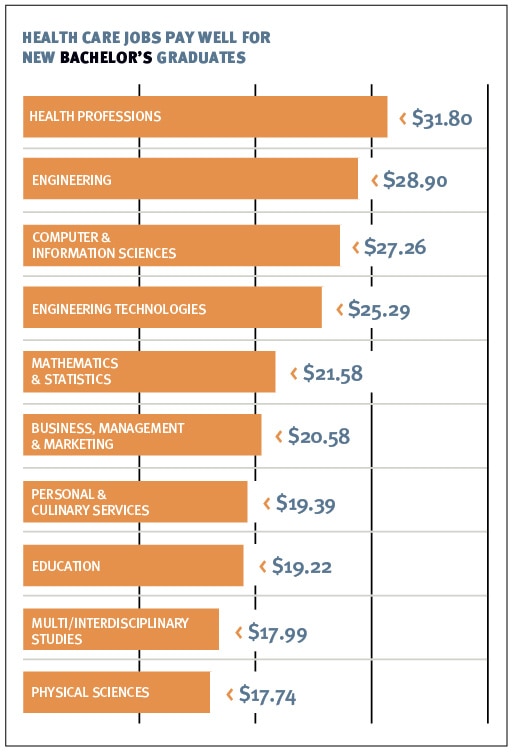