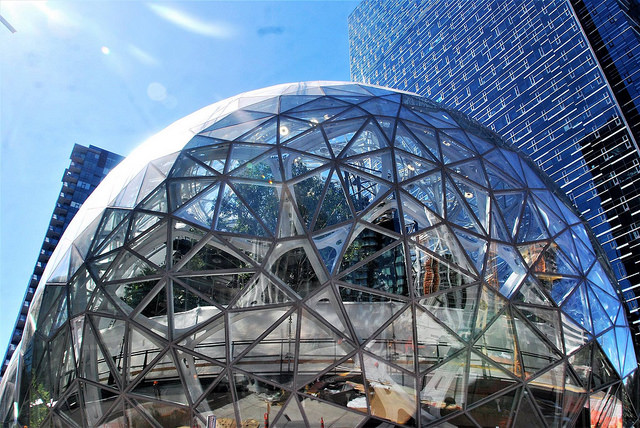 The Case for Amazon Coming to Minnesota? It’s Not That Great

Minnesota’s mostly middling in the areas Amazon has identified as important.
By Greta Kaul
September 28, 2017

Having all but taken over downtown Seattle, Amazon this month announced that it’s looking for a site to build a second, $5 billion corporate headquarters, well, somewhere.

Just where that will be, the company says, depends on a few things, including space, transit, workforce, taxes and, it strongly hinted, incentives. It outlined these stipulations in an eight-page request for proposal.

A lot of metro areas want in on this. And they’ve signaled they’ll do a lot to get it, drawing up plans to offer everything from economic development subsidies to a giant saguaro cactus (from Tuscon; Amazon politely declined the gift).

The Twin Cities metro is interested in Amazon, too, and the Minnesota Department of Employment and Economic Development and economic development partnership Greater MSP are working to send the company a pitch (we hope they send a giant tub of lutefisk), by the due date, Oct. 19. Amazon says it will announce its selection next year.

But are the Twin Cities really a contender? Let’s look at the merits and demerits of our fair metro in this race.

Metro size: Amazon wants a metropolitan area with more than 1 million people.
We’re in the running. The Twin Cities, with about 3.5 million people, is one of more than 50 U.S. metros with a population that fits this specification. But the competition isn’t limited to the U.S., and some list Toronto as a feasible locale.

Workers: Amazon claims it will create up to 50,000 new full-time jobs, plus hints at its very presence spurring an indirect boom in jobs. It wants a strong university system and highly educated labor pool within reach.

Just how ready the Twin Cities’ labor force is for Amazon is depends on how you look at it.

The New York Times’ Upshot disqualified the Twin Cities from the running on the basis of slow job growth. Indeed, as of the last state economic forecast in February, Minnesota’s employment was growing at a rate of 1.3 percent — just below the national average of 1.4 percent. Projected job growth going forward was 1.1 percent.

So, a bit below average. In the future, Minnesota’s job growth may be hampered by a labor shortage. Our state isn’t an anomaly in this regard — a lot of states face declining birthrates and a glut of baby boomer retirements that are responsible for the prediction of this trend. But it is additionally handicapped by an inability to get people to move here in higher numbers than they’re moving away, at least domestically, in recent years. Thanks to immigrants — international migration — Minnesota does gain more people than it loses. But the net gain is small: around 6,000 people annually in recent years.

A common misconception is that it’s older Minnesotans fleeing Minnesota’s cold winters for Arizona and Florida who are responsible for this trend. But, it’s actually young, often well-educated people, according to the Minnesota Demographic Center — just the types Amazon would probably like to hire.

Unemployment is low in Minnesota: The job market in Minnesota, where there’s only about one job available for every person looking for one, is already tighter than in many parts of the U.S.

On the flip side, it’s unlikely any major metro has 50,000 people with the qualifications to work at Amazon who don’t have jobs, said Myles Shaver, professor of strategic management and entrepreneurship at the Carlson School of Management. Our workforce here is highly educated. Furthermore, with headquarters for companies like Target and Best Buy here, the Twin Cities already has a high share of workers to work in managerial and administrative-type positions.

And yes, it is hard to get people to move to a place that’s an ice box roughly half the year, but once they’re here, this metro has a very high retention rate, Shaver said.
It’s not clear what the criteria for a “strong university system” is, but the University of Minnesota-Twin Cities, a Big Ten school and one of the largest campuses in the country, is a well-regarded research institution with computer, engineering and business programs.

While it doesn’t say exactly what it means by incentives or a friendly government, Amazon might not find either in Minnesota.

Boosters of the Twin Cities tout the high concentration of Fortune 500 companies per capita as evidence it’s a nurturing environment for business. But others say taxes and a government that’s not willing to bend over backwards for business aren’t likely to appeal to Amazon.

While companies have certainly been offered economic development subsidies in Minnesota — a subsidized makeover for Rochester with its “Destination Medical Center,” a public-private partnership between the Mayo Clinic, other developers, Rochester, Olmsted County and the state, Shutterfly in Shakopee and Digi-Key in Thief River Falls, to name a few, it isn’t among the most generous states in this regard, Shaver said.

Gov. Mark Dayton has signaled that Minnesota will court Amazon with a “restrained” economic development proposal.

Then there’s taxes. Whether Minnesota’s taxes are high enough to scare off companies is a subject of debate.

The Tax Foundation lists Minnesota’s corporate tax rate as the third highest in the U.S., behind only Iowa and Pennsylvania. Of course, corporate tax breaks are one of the things that could be part of whatever incentive offer the company gets, but there’s still the matter of personal income taxes, among the highest in the country.

Tax rates aren’t a deal breaker for everyone, though, apparently: CNBC ranked Minnesota as the best state for business in 2015.

“Never since we began rating the states in 2007 has a high-tax, high-wage, union-friendly state made it to the top of our rankings. But Minnesota does so well in so many other areas  — like education and quality of life — that its cost disadvantages fade away,” the network noted.

But John Spry, an associate professor in the finance department at the University of St. Thomas speculated Amazon might not be interested in moving to a state with personal income taxes, especially above-average ones, pointing out that Washington and Texas, where Amazon currently has major headquarters (it acquired Austin-based Whole Foods earlier this year), don’t have such a tax.

“To the extent that you want very focused business public policy, incentives, or low individual tax rates or things like that, that’s not us,” Shaver said.

Location, location: Amazon is looking for 500,000 or more square feet of space for its initial phase of development, with up to 8 million square feet beyond 2027. It wants that space to be: 30 miles or less from a population center, within 45 minutes of an international airport with nonstop flights to major cities, not more than two miles from major arterial roads and highways, have on-site access to mass transit, and have fiber connectivity.

We don’t know the full details on Minnesota sites that will be suggested to Amazon: Local governments’ deadline for submitting ideas to Greater MSP was Friday, but Mike Brown, the organization’s VP of marketing and communications, said the organization would not release a list.

But there are a few Twin Cities sites the powers that be are mentioning as places to which Minnesota might try to lure Amazon.

Ramsey County announced Friday that it was suggesting two sites: one, the former army munitions plant northeast of Minneapolis in Arden Hills, which is near both 35W and I-694, and relatively close to downtown Minneapolis and St. Paul, is one contender. Ramsey County has also offered up the downtown St. Paul, riverfront site that used to house the Ramsey County jail and West Publishing (plus an existing county building). This site is located near Metro Transit’s green line.

Others have suggested St. Paul’s Ford Assembly Plant Site, the Mississippi River-abutting spot near Minnehaha Falls whose proposed development has caused considerable tension in St. Paul. We don’t know if it’s in St. Paul’s because the city’s not disclosing the sites it pitched as of now.

Obvious benefits of being close to the river (also very close to the airport) aside, Spry speculated that the site’s distance from major road arteries could be a problem.

Spry suggested the site on the edge of downtown Minneapolis once considered for the new Vikings stadium, where the Minneapolis Farmers Market currently resides, could also be developed to Amazon’s specifications. A benefit here would be close mass transit and highways. Spry also suggested Eagan, a suburban site with airport proximity and highway access.

Are we really in the running?
Another bullet point in Amazon’s memo is diversity and cultural fit. While the Twin Cities are not generally thought of as one of the more diverse metropolises in the country, they have, over time, become less homogenous.

Then there are other things you might not consider, Spry said: highly educated, public transit-connected Boston might have an advantage over other places because it's always three hours later there than in Seattle. It’s in vogue in some industries, especially ones that  are computer code-heavy, to have teams across time zones so they can extend the work day and more efficiently finish projects, Spry said. Toronto, same story.

But whether the Twin Cities — or any city — really has a shot at this thing depends on whom you ask. Again, the New York Times’ analysis suggests no. But Axios and real estate exerts the Wall Street Journal talked to say maybe.

If he had to bet, Spry would give it a 50-50 or better chance that the company goes to Austin, Texas. Having just acquired Whole Foods, Amazon already has people there. The city has a well-respected university, a big tech workforce, and a nearby airport. Texas has low taxes and a reputation for big economic development incentive packages.

While the Twin Cities’ well-educated workforce might appeal to the company, the business climate might disqualify us — if this is a race at all, Spry added, speculating that Amazon has already picked out a site.

“If they knew where they wanted to expand, they wouldn’t get much if they just announced that, so they’re doing this game first,” he said. “I wouldn’t get your hopes up that it’s going to come here.”