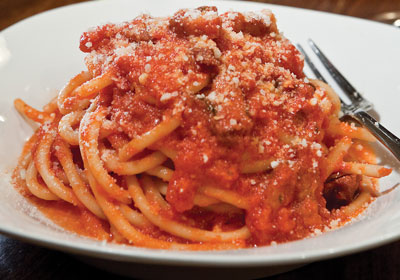 An Italian gem hides away amid the buzz of Northeast Hennepin.
May 11, 2012

“Long story short, I was a master butcher in Italy, and when I move here, I don’t want to be a butcher because all the meat comes in a box. So I started cooking.” That’s how Filippo Caffari, chef and proprietor of The Butcher Block in Northeast Minneapolis, introduces himself.


Straightforward and Roman to the core, Caffari first cooked at Italian restaurants around the Twin Cities before opening The Butcher Block in a keyhole of a space across from Surdyk’s three years ago. And while it’s still going strong, filling date-night two-tops alongside girls-night-out tables, chances are you haven’t heard much about it lately. Among a class of showier, more innovative restaurants that opened in the past three years, The Butcher Block has gotten lost in the shuffle.

Caffari’s cooking philosophy doesn’t exactly scream for attention. “We try to don’t discover nothing,” he says. “We try to execute good Italian food.” His version of “good Italian food” means rustic classics and the immutable sequence of antipasti, primi, secondi. It also means he puts his old skills as a butcher to work, curing all the guanciale and pancetta, from heritage Duroc pork, and mixing all the sausage in-house. “The bread, the meatballs, the gnocchi, the ravioli—everything handmade.”

While the menu changes seasonally, Caffari says there are three dishes he can never bring himself to take out of rotation: grilled octopus, short ribs cacciatore, and bucatini all’amatriciana. Caffari has fresh octopus flown in from Spain and grills the palm-sized squiggles until they are purply-black and infused with smoke, tender and meaty.

He says he goes through 250 pounds of Nebraska black Angus short ribs every week, putting what looks like a half-pound of fork-tender meat on each diner’s plate, along with a couple of roast potatoes and a rich brown gravy.

To the bucatini all’amatriciana Caffari adds his own Roman touch, substituting the porkier guanciale for traditional flecks of pancetta. The fat tubes of pasta take on a welcome, warming heat from the chile-infused tomato sauce.

The 50-bottle wine list, unsurprisingly, is almost entirely Italian and covers the whole boot of Italy, calf to toe. By-the-glass offerings are minimal, though. And, in an otherwise excellent evening, you might encounter lapses: bread that had been sliced hours before or a drab appetizer of breaded ciliegine (mozzarella).

But none of that will make you sorry that Caffari traded his bloody apron for a chef’s jacket. While The Butcher Block feels like an inside secret, it deserves a wider audience. As Caffari himself says, “There’s nothing secret, just simple Italian food with