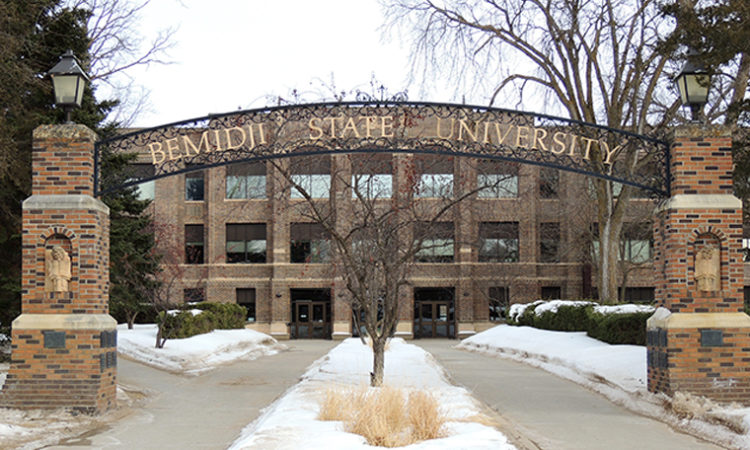 Bemidji State University, which was founded in 1919, has an enrollment of 5,200 students. ( Photo by Gregg Aamot/MinnPost)

The Bemidji State Bump: How One Small-Town University Buoys the Local Economy

Bemidji benefits not only from the money BSU pumps into the local economy but also from its cultural impact, which includes plays and concerts, athletic events, workshops and speeches.
By Gregg Aamot
April 05, 2018

During their days as students at Bemidji State University, Justin Kaney and Tom Hill both studied design technology, a hands-on engineering program that would come in handy years later – though in a way neither expected.

Kaney was an undergraduate when he first met Hill, who had returned to Bemidji State for graduate work after living in Austin, Texas. Eventually, Kaney took a job in Pawtucket, Rhode Island – working for the famous toy maker Hasbro Engineering – while Hill ended up in the Twin Cities. But it wasn’t long before Kaney began to get antsy, having decided that he “didn’t want to spend my life in a cubicle,” and began talking to Hill about joining him in Minnesota for some kind of business venture – possibly a foray into the craft beer movement.

Now, the men are back in northern Minnesota, running Bemidji Brewing – with the help of their wives, Tina Kaney and Megan Hill – a craft brewery with a lineup of a dozen beers in this old lumber town.

It wasn’t a sure thing, moving to this city 230 miles north of the Twin Cities. While the couples wanted to be in Minnesota, other cities perhaps made more sense for their brewery; Rochester, its population now more than 100,000, at one point was at the top of the list.

“We just felt like Bemidji offered more of what we are interested in,” Justin Kaney said, rattling off a list of outdoor attractions: the nearby Chippewa National Forest; miles of paved bike trails; cross country ski trails in the winter; Lake Bemidji. “A lot of those amenities are special and just are not easily replicated elsewhere.”

Their story is an example of how a university can help to shape a small town. At a time when many small towns in Minnesota are struggling – losing population or industry, or both – Bemidji finds stability in its state university, not only from the money the school pumps into the local economy but also from its cultural impact.

While it can be difficult to measure the value of a college on a town, Bemidji State, which has an enrollment of 5,200 students, offers an interesting look.

While the population in many towns in rural Minnesota has stagnated, or shrunk, in recent decades, Bemidji has been growing, if modestly – from about 11,000 residents in 1980 to about 15,000 today. Similar trends can be seen in many other Greater Minnesota cities with colleges or universities – public or private – including each of the six that have a four-year Minnesota State university.

Recent research suggests that universities can be economic drivers in their communities. A 2013 report [PDF] commissioned by Minnesota State (then known as the Minnesota State Colleges and Universities system, or MnSCU) found that Bemidji State generates an annual estimated economic impact of $166 million on the surrounding economy. 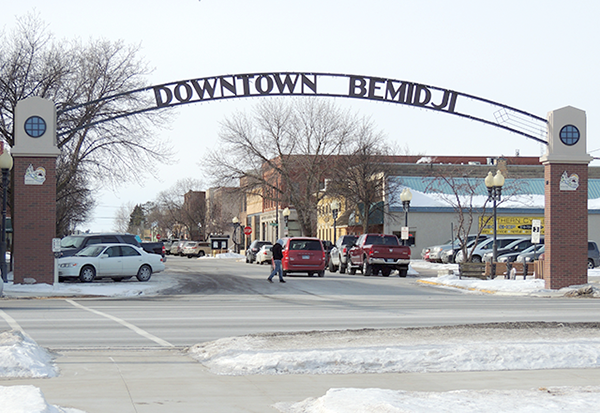 An entrance to downtown Bemidji, which has two Irish pubs and cafÃ©s. (Photo by Gregg Aamot/MinnPost)

That figure was based on three broad categories: spending by the university and its students; indirect spending generated by the university (which economists call the “multiplier effect”); and enhanced productivity through university graduates. The study also showed that the university generates an estimated 2,225 jobs, plus another 439 indirect jobs through vendors or contractors that support the school.

Jose Diaz of Wilder Research, a St. Paul organization that conducts research for nonprofits, government agencies and other groups, was the lead researcher on the studies. He said the results highlight the economic buffer that colleges or universities can provide rural towns that are lucky enough to have them.

“Even in a recession a university doesn’t go away,” he said. “In fact, more people might come back to college during those times, so, in that sense, college towns suffer in a lesser way the negative impacts of (an economic) downturn.”

He added: “They have a little more stability. The economy fluctuates a little less than in towns that rely on tourism or another industry.”

Consider a proposed bonding bill circulating at the Legislature. It would allow the state to borrow $542 million for higher education construction projects – including $22.5 million for Bemidji State for the demolition and replacement of Hagg-Sauer Hall and renovations to other buildings.

Moreover, statistics from the state Department of Employment and Economic Development (DEED) show that Bemidji has made a strong recovery from the Great Recession and continues to grow more than comparable regional centers. For instance, comparing third quarter numbers from 2011 and 2017, employment in Bemidji grew by 10.4 percent over six years. During the same time frame, meanwhile, job growth was 6.7 percent in Alexandria and 5.3 percent in Brainerd/Baxter – towns with community colleges, but no universities. 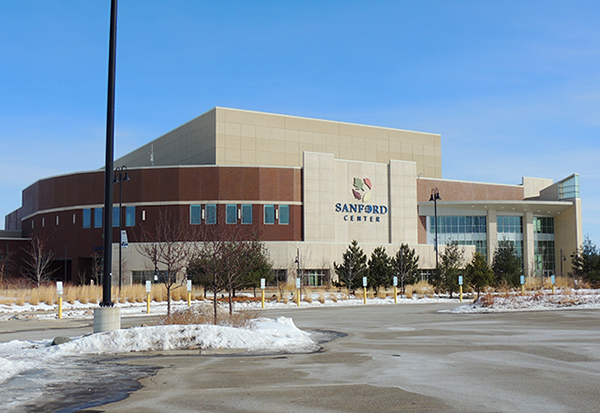 Once the economy began to recover, “a lot of rural parts saw an initial spike in the labor force,” said Chet Bodin, a DEED economist whose work covers northwest Minnesota. “Whereas in places like Alexandria and Brainerd and St. Cloud it fell right back off, in Bemidji it did not fall off. A lot of people came to the region and stayed in the labor force.”

In the last decade or so, the Bemidji region has undergone a commercial renaissance of sorts, led by an expansion of its local hospital into the regional Sanford Bemidji Medical Center and the growth of Bemidji Regional Airport into the state’s fourth busiest. Those developments have spawned small businesses, including a civil engineering firm and a company that repairs old aircraft. 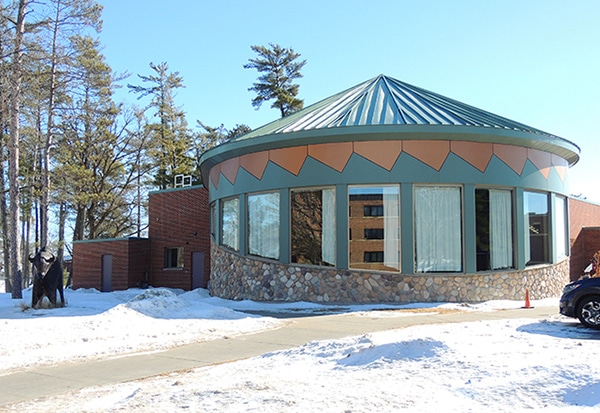 The college, as well as its partner school, Northwest Technical College, has contributed to this growth – perhaps most obviously by supplying the medical center with nurses, technicians and other health care workers.

“The Bemidji community has really relied heavily on the university,” said James Bensen, a former Bemidji State president who, not long after retiring in 2001, joined other civic leaders in thinking about a long-term plan for the city. “There are probably few cities (in Minnesota) that are humming along like Bemidji is right now.”

Yet beyond dollars and cents, the university also provides some cultural cachet for the 65,000 residents of what demographers call the Headwaters region of Minnesota: plays and concerts, athletic contests, workshops and speeches.

For nearly 50 years, for instance, Bemidji State has presented the Madrigal Dinners, an annual choral music show. Students and faculty members play with the city’s symphony orchestra. In November, the school hosted its 46th annual Powwow. And, of course, the university’s men’s and women’s hockey teams compete at the NCAA Division I level in the Western Collegiate Hockey Association. 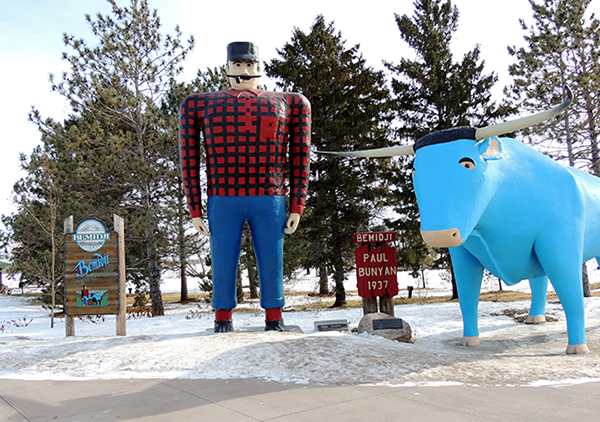 The statues of Paul Bunyan and Babe the Blue Ox on the shores of Lake Bemidji. (Photo by Greg Aamot/MinnPost)

Business professor Douglas Leif had been teaching at Iowa State when he came to Bemidji State 28 years ago. Active in the campus’s athletics life, he has season tickets to hockey games, which are held at the 5,500-seat Sanford Center, a state-of-the-art arena built in 2010 a few miles from campus.

Leif called Beaver hockey games the “focal point of the weekend” during the city’s long and cold winters. “It’s our culture up here, and we’re all there for the same thing – the ritual,” he said. “Busloads of students come from the dorms; the eateries have shuttles. It’s obvious when it is hockey night at BSU.”

On a cold Friday in February, just outside of Hobson Memorial Union, students parked their cars on frozen Lake Bemidji, a winter tradition that helps students park for free – at least for a few months. Inside, in the union’s lounge, students studied at tables or on comfy chairs next to floor-to-ceiling windows that provided a winter vista.

The Bemidji State campus is tightly fit into a few blocks of the city, bordered by the lake on one side and a wooded neighborhood of classic homes on the other. The downtown, with its cafÃ©s and a pair of Irish pubs, is a dozen blocks away.

Next to Chet Anderson Stadium, where the school’s NCAA Division II football team plays (except for hockey, all of the school’s 14 sports compete in Division II), sits the American Indian Resource Center, which opened in 2003. The center has a strong connection to the three American Indian reservations in the region – Leech Lake, Red Lake and White Earth – providing both academic support for Native American students and space in its Gathering Room for presentations and displays of Native American culture.

For Faith Hensrud, Bemidji State’s president since 2016, the resource center is an example of how rural universities can tap into their particular culture and setting, creating a unique appeal. The center has helped the school increase its Native American  enrollment to 250. By 2022, Hensrud said, the college hopes to have 350 Native American students.

“There is certainly a focus on (student) retention” at the center, she said. “And we also have a lot of cultural activities, so when (Native American) students come to BSU they are not expected to leave their culture behind. They are embracing it.”

Staying in town — or returning

According to figures from DEED, 36 percent of Bemidji State graduates from 2013 and 2014 who held jobs two years after graduating were working in the northwest Minnesota region. Meanwhile, about two-thirds of their counterparts from nearby Northwest Technical College who held jobs were also working in the region.

Those were some of the highest such percentages for any region in the state, according to Bodin, the DEED economist. “It’s nice to see that,” he said. “That doesn’t happen everywhere.”

For Justin Kaney and Tom Hill, Bemidji – which Kaney calls “a jewel of a town with a progressive edge” – has been a good fit. They are selling Bemidji Brewing’s beers – with names like Flanders Sour Red and London Rye – over a 50-mile radius and planning on tripling the brewery’s size, to 6,000 square feet. 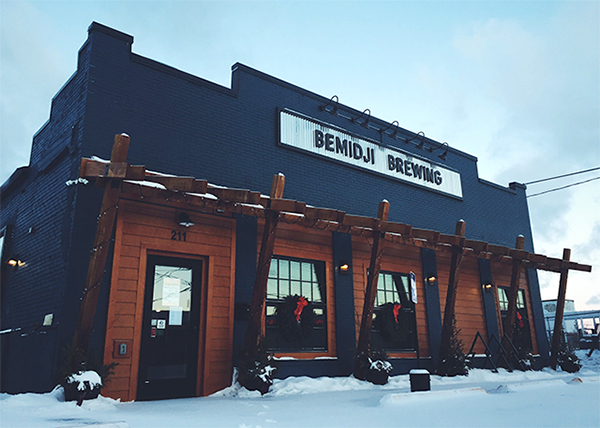 Studying design technology at Bemidji State has helped them understand the manufacturing and production demands of a brewery. It also prepared them to tackle all sorts of projects – from making tap handles to creating marketing materials. Perhaps as significantly, the university exposed them to a part of the state they might have never experienced – much less invested their future in.

“A lot of folks do stay around,” Kaney said, “but how else would they even know about the place unless they were here at the college?”