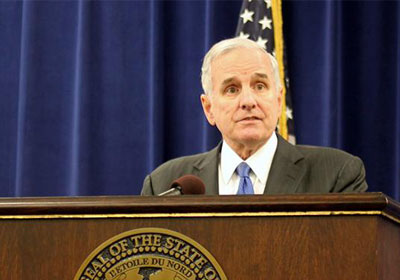 The Anatomy Of A $1 Billion Budget Surplus

“This is greatly improved territory, but there’s always going to be challenges,” said Gov. Mark Dayton. “There will be plenty of ideas for use of this money.”
December 15, 2014

How big is a $1 billion budget surplus? Well, like almost everything in politics, that depends on whom you ask.

Looked at one way, the projected 2016-2017 surplus announced by budget officials on Thursday is the best news lawmakers have had in years. It’s the first November budget forecast projecting a surplus in the state in eight years. Just four years ago, lawmakers were facing a $6 billion budget deficit. In that context, $1 billion extra on the bottom line appears to be a windfall for lawmakers like DFL Gov. Mark Dayton, DFL Senate Majority Leader Tom Bakk and Republican House Speaker-elect Kurt Daudt, who together will have to agree on a two-year budget plan next session.

Looked at another way, $1 billion is just a fraction of the state’s more than $40 billion two-year budget. On education alone, the state is projected to spend about $17 billion in 2016-2017, and another $13 billion on health and human services. And, as Minnesota Management and Budget Commissioner Jim Schowalter notes, there will be about $900 million in added inflationary costs on state services that aren’t included in the budget.

Then there are those long lists of things lawmakers and stakeholders say need more money:

“Everybody who has ideas to spend what seems like an incredible amount of money should temper their expectations a little bit,” Bakk said Thursday. “In the context of a $40 billion budget, $1 billion is a pretty small cushion.”

The governor and legislative leaders of both parties agree that additional transportation funding should be a priority next session; Dayton said Capitol watchers can expect some kind of additional revenue in his budget for roads, bridges and other means of getting around. Some transportation-funding advocates put the price tag as high as $6 billion over the next 10 years just to maintain the state’s current transportation system. Dayton has already floated the idea of increasing sales taxes on gas at the wholesale level.

“Without a good transportation system, a lot of companies —especially ones in Greater Minnesota [that] have longer distances to travel their goods and products — are going to be feeling that squeeze,” Dayton said. “Those are the roles government can plan in really contributing to economic growth.”

Roads and bridges a GOP priority

Daudt said roads and bridges will be a priority for his new Republican majority caucus in the House, and he’s willing to keep some kind of revenue to fund improvements on the table, but he added that a gas-tax increase is “not likely.”

“We are spending more money on transportation right now than we ever have in the past,” Daudt said. “While I don’t think a gas tax is the answer and I don’t think it’s likely, I’ve said all along that every option is on the table.”

Dayton plans to release his 2016-2017 budget on Jan. 27, but legislators will wait to craft their initial budget plans until after the February forecast.

One thing all sides seem to agree on when it comes to the $1 billion surplus: It will make their jobs a little easier — not more difficult — when session kicks off on Jan. 6.

“Considering that four years ago we were looking at a $6 billion deficit and two years later a $625 million deficit, this looks a lot better than that,” Dayton said. “This is greatly improved territory, but there’s always going to be challenges. There will be plenty of ideas for use of this money.”

Dayton added that a healthy surplus will also help avoid the 21-day government shutdown that happened four years ago, the last time the state had divided government. Dayton and the Republican-controlled Legislature didn’t strike a budget deal before time ran out on the session.

“It should make it more possible that we come out of session on time and without a showdown,” he said.

Daudt agrees: “I think this does make our job easier. We’ve just come through a long period of deficits.”