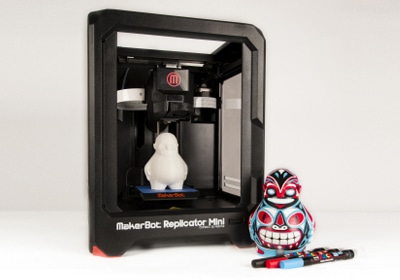 The 5 Risks That Plague Stratasys

Competition is nipping at the company’s heels while the company faces legal troubles.
April 15, 2016

Stratasys, now touted as on the rebound after a turbulent 2014 and 2015, said in an SEC filing Monday that it faces a number of challenges in the 3D printing and additive manufacturing markets.

In a 19-page list of risk factors (which the company said are not the only risks they face), potential issues range from the Eden Prairie-based company’s financial condition to the economic and military instability of Israel, home to Stratasys’ dual corporate headquarters.

Although many of the risks mentioned are speculative and possibly immaterial, a number of the challenges could bare significant consequences for the company. Here are five that could affect Stratasys the most.

1. Competition is intensifying at the lower end of the 3D printing market.
Although Stratasys builds printers for large companies with complex operations, it also makes entry-level, desktop 3D printers for everyday users and businesses with more simplified needs. That market in particular, Stratasys said, is becoming crowded and was a major reason its sales decreased in 2015. The company’s main rivals at this time are 3D Systems Corporation and Materialise but competition is expected to heat up very soon. In late 2014, HP announced plans to introduce an entry-level 3D printer sometime in the future and, a year later, Canon said it had a similar plan in motion. Given that both HP and Canon are much larger companies with more resources than Stratasys, the company believes its current and new competitors have the capability to respond more quickly to emerging trends and could competitively price their products against Stratasys.

2. The company faces a number of lawsuits.
Five current or former minority shareholders and former directors of the company are suing in regards to Stratasys’ April 2012 acquisition of Objet, a 3D printer maker from Rehovot, Israel. Each suit demands that Stratasys amend the capitalization table of the company so that certain share issuances made by the plaintiffs prior to the merger would be cancelled. Each plaintiff is also looking to gain additional stake in the company for “the subsequent dilution to which they have been subject.” According to Stratasys, one lawsuit has been dismissed, while the other lawsuits are currently undergoing pre-trial hearings.

3. The U.S. Securities and Exchange Commission (SEC) has an open investigation on the company.
On March 3 of this year, the SEC’s enforcement division issued a subpoena to gain a number of documents relating to the goodwill impairment charges and/or intangible assets that Stratasys reported on its balance sheet filed with the SEC. Specifically, the federal agency wants to know how Stratasys came to each figure’s valuation given the company’s impairment of goodwill charge had a more than 900 percent year-over-year rise—from $102.4 million in 2014 to $942.4 million in 2015. (In part, the company’s total assets were cut in half—from $2.9 billion in 2014 to $1.4 billion last year—after reporting operating losses of nearly $1.4 billion in its past fiscal year.) Stratasys said the SEC investigation is still in the very early stages and that it intends to be fully cooperative throughout the process.

4. Third-party replication of 3D printer filaments and cartridges is eating away at Stratasys’ bottom line.
Like ink and paper for your standard printer, the materials that 3D printers require to function have been met with their fair share of imitator brands. According to Stratasys, its consumables sales yield a greater gross margin than its entry-level systems and the company has sold “a substantial portion” of the filaments and cartridges used on many of its systems. Nevertheless, other companies are currently selling products used directly with Stratasys 3D printers, which is impairing Stratasys’ revenues and profitability. To deter future replication of its consumables, the company said it plans to seek patent protection.

5. Growing international operations and sales remains tricky in today’s global economy.
Last year, 41 percent of Stratasys’ sales came from countries outside of North America. With so much of its business coming from overseas, the company is subject to the adverse affects of foreign currency exchange rates, tax consequences, reduced protection of intellectual property rights (particularly in Asia and South America), possible tariffs, trade barriers, and laws and business practices that favor local competition. Stratasys said that a failure to manage market and operational risks in foreign countries could hurt its operating results.