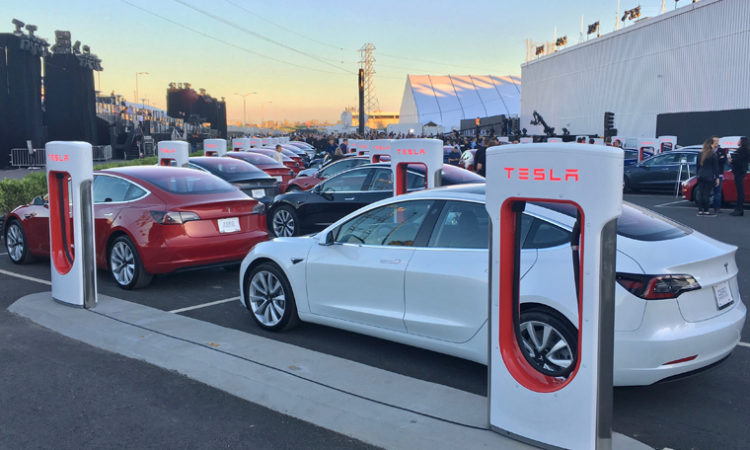 The first production run of Tesla's Model 3 sedans were given out to early buyers last July. ( Photo by Steve Jurvetson/CC)

Perbix and its 150-member team will remain in Minnesota. Meanwhile, the automaker said it would be “expanding [its] presence and recruiting efforts in the Twin Cities area.”
By Sam Schaust
November 07, 2017

Electric car pioneer Tesla Inc. has acquired Brooklyn Park-based Perbix, a maker of automation machinery used for manufacturing and in assembly lines, for an undisclosed sum.

Perbix has provided high tech and custom automation systems for companies large and small from around the world, including Fortune 500 corporations. For almost three years, the company has been a supplier to Tesla, producing equipment used to build its vehicles, a spokesman for the automaker told Bloomberg.

Tesla’s purchase could be the shot in the arm it needs to boost production of its Model 3 sedans, which fell well short of the 1,500-unit goal the company set for its third quarter. Instead, Tesla’s assembly line produced only 260 of the sedans during the three-month period. (As of August, roughly half-a-million pre-orders for the Model 3 sedan had been placed.)

CEO Elon Musk, in a call with investors last week, cited automation issues as a cause for the slow start. “There’s vastly more automation with the Model 3,” he said during the call. “The tricky thing is that when one automation doesn’t work, it’s really hard to make up for it with men and labor. With the [Tesla Model] S or X, because a lot less of that was automated, we could scale up labor hours and achieve a high level of production. With Model 3, it tends to be either the machine works or it doesn’t or it’s limping along and we get short quite severely on output.”

By the end of the first quarter next year, Musk is hoping production will accelerate considerably, reaching an output of 5,000 cars per week. To do so, Palo Alto, California-based Tesla will need to overcome its automation challenges—something Perbix could help it do.

Tesla said it intends to grow Perbix’s workforce, which currently stands at 150. The automaker has already created listings for programmers, engineers and technicians on its website.

Tom Perbix founded Perbix Machine Co. in 1976 as a maker of machining parts and assembling equipment, according to the Star Tribune. Jim Dudley, the current owner of Perbix, bought the company in 2001 and transitioned it into a specialist of high tech and custom automation equipment.

In a regulatory filing, Tesla said Dudley would receive nearly 35,000 shares of Tesla stock, worth about $10.5 million as of the Tuesday trading period when company shares were trending above $300 a piece.

The cost for Perbix, however, is being covered with a mix of stock and cash. Tesla said the deal shouldn’t have a material effect on its fourth quarter financial performance.