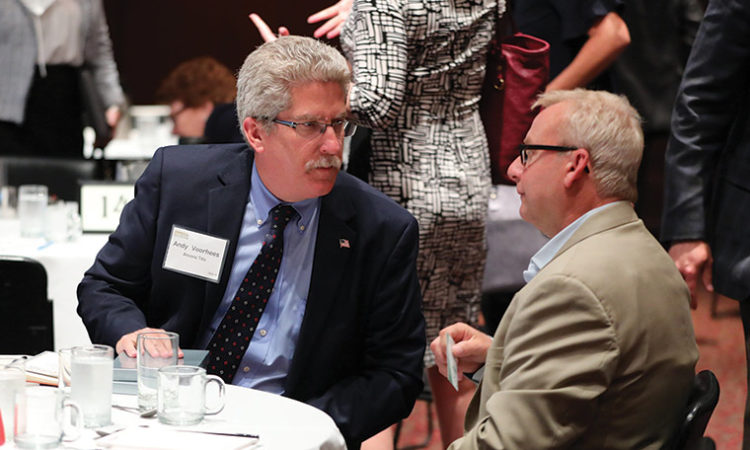 Commercial real estate always has been a cyclical business. But with an evolving retail environment and shifts in how and where younger generations want to live, changes are occurring much more rapidly. At the same time, the sector is experiencing a number of challenges that are influencing developers to look at new opportunities such as senior living and multifamily housing.

To better understand the challenges Minnesota developers are facing and learn about the projects they are working on, Twin Cities Business hosted its first Commercial Real Estate Forum on June 28 at the Metropolitan Ballroom in Golden Valley. The forum was moderated by senior writer Burl Gilyard and sponsored by Briggs and Morgan and MNCAR.

Here are edited excerpts from the forum event.

Q: Why did United Properties get involved in the Macy’s project with New York-based developer 601W Cos.? What are your plans?

Bill Katter: What drew us to the site was the desire to help put a new face on the building and positively impact the downtown community. We had some concern about a new owner coming into the Minneapolis market not having any history with our downtown or our city. It’s a little early to get too public with what we are doing there, but generally it’s going to be a mixed-use environment. It’s experientially driven, where the retail will hopefully be a significant factor in making the office space an attractive environment. One of the development challenges is trying to bring food and amenities that support downtown workers into that lower level.

Q: Who do you see as the type of tenants that might occupy that space?

Katter: The goal is to have companies in downtown that aren’t downtown today, like Apple, Hammer Made, Athleta, Lululemon. I would say it would be a set of fashion retailers who can play off of the people downtown during the weekday, and it would be a significant food hall, which becomes a destination on weekends. If we can’t get people down there on the weekends then the rest of the retail is not going to be successful.

Q: Ryan Cos. is proposing to build another office building, Block One, near the football stadium in downtown Minneapolis. Where are the tenants who are going to pay the new construction rents?

Collin Barr: The office market in general, compared to prior cycles, is thin. We don’t see robust growth of absorption in office. At the same time, there is a talent attraction and retention crisis, and people are trying to figure out what they can do with their office space to make sure they are getting and keeping that talent. So it’s going to be someone who recognizes the unique benefits and sees it as a primary tool to help them attract talent.

Q: You are one of the partners in a plan in Edina to build a couple of condo towers. Given the initial resistance from the city about the height, how are you going to move forward?

Barr: Persistence. I think that whole corridor, both Xerxes and France avenues in Edina, is going to see an immense amount of development over the next 20 to 30 years. There is an opportunity for that area to be urbanized. The market is there, it’s just a matter of whether the city leaders and the neighborhood embrace the bold vision.

Q: How do you plan to navigate through the next economic downturn?

Katter: We are already seeing a slowdown in demand on the commercial side. If there is a major change in tax law, corporate tax rates could have a big effect on our business. Something we have done to diversify ourselves against the typical high correlation between the commercial business and the general economy is senior housing. We have vastly accelerated the pace of our senior housing business, which is largely driven by needs, demographics and the aging population of the U.S.

Kelly Doran: I think you are going to see ups and downs in markets and submarkets. However, there is a debate going on in Washington about the elimination of deductibility of corporate interest. If that happens, that will have a significant impact. Our whole industry is fed by debt in one form or another, so a change in the deductibility of that interest increases taxable income, which increases taxes, which correspondingly is going to have to have a higher yield and that means higher rents. It will definitely disrupt the model if that goes forward.

Ravi Norman: We are doing a lot of groundwork to build up prospective tenant markets in places where the traditional anchor strategy might not be the way to operate. Also, I think the shortages in craft labor are going to increase the rate of adoption of new technological innovations. You’re going to see embracing of systems, sensors, software and technology. We’re in an interesting time for transformation, and I think that’s going to help with the next downturn.