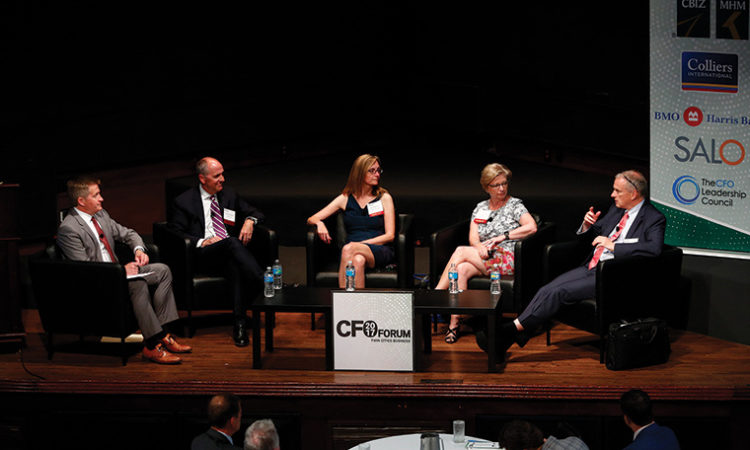 The panelists, from left, were: Bill Acheson of GWG Life; Kim Nelson of SPS Commerce; Kathleen Pepski of Hawkins Inc., and Marcel Smits of Cargill.

At the TCB forum, executives discuss how and when companies should make strategic corrections.
By Kate LeRette
August 01, 2017

Taking risks is essential for a company’s growth, but determining which risks are worth taking can be challenging. One wrong decision could lead to the demise of the company, while the right decision could transform it into an industry leader.

While these decisions often are discussed collectively among corporations’ C-suite executives, the chief financial officer is a key resource in determining which risks are financially viable.

“The CFO is in the unique position of being very well-versed in things that are important—accounting, controls, regulation, as well as financials and filings—but they’re also in the middle of business strategy and know what the risks around a company are,” says Bill Acheson, CFO of GWG Life, a specialty life insurance company based in Minneapolis.

To better understand the financial challenges that Minnesota companies are facing in today’s economy, Twin Cities Business hosted its annual CFO Forum on July 13 at the Metropolitan Ballroom in Golden Valley. The forum was moderated by editor in chief Dale Kurschner and sponsored by CBIZ, Colliers International, BMO Harris Bank and Salo.

Joining Acheson on the panel were Kathleen Pepski, CFO of Hawkins Inc., a Roseville-based chemical manufacturing and distribution company; Kim Nelson, CFO of SPS Commerce, a Minneapolis-based retail-focused technology company; and Marcel Smits, CFO and executive vice president of Cargill, a worldwide provider of food, agriculture, financial and industrial products, based in Wayzata.

The companies share some features. SPS Commerce and GWG Life launched IPOs (in 2010 and 2014, respectively); Hawkins and Cargill are longstanding companies. Yet each business has encountered a different set of challenges and opportunities.

In 2008, Cargill identified an opportunity to integrate its operations, and its leaders initially decided on a single-instance SAP (systems, applications and products) implementation. But after spending a fair amount of money, the company realized it wasn’t a viable solution. Instead, Cargill decided to pursue multiple SAPs, focusing less on technology integration and more on process and data integration. Since then, “out-of-pocket costs have gone down by 60 to 70 percent,” Smits says.

Identifying when to cut losses is something Pepski knows about. Shortly after joining Hawkins in 2008, the company had to decide whether to keep investing in its pharmaceutical business or to divest. “There was a lot of risk, but we felt that there was not a lot of reward, so we chose to divest, and we haven’t looked back,” Pepski says.

That major move helped the company regain its focus. In early 2016, Hawkins acquired a California-based health and nutrition ingredients business, which now accounts for about a third of the company’s revenue.

Increased regulations have afforded some merger and acquisition opportunities for Hawkins. While maintaining compliance can be expensive, it also limits the amount of competition. “As the regulation burden has increased, what we found was that some smaller competitors could not afford to invest and become compliant,” says Pepski. “It’s very expensive to invest in our facilities, but at times it has helped us.”

Knowing which investments to make and when to make them is as important as knowing when to cut ties.

Since Nelson joined SPS Commerce in 2007, the company has grown from a $20 million business to a $200 million operation. As SPS Commerce grew, Nelson and her team identified a need to invest in adding talent. From 2011 to 2016 the company added one executive position to the team each year.

“We recognized that we needed to bring in and recruit talent that had been there, done that, and could bring in expertise to help us get where we are trying to go,” says Nelson. “It was a very deliberate process.” In addition to expanding executive talent, Nelson says the company adds more than 400 employees a year.

Balancing its investments has been a crucial strategy in SPS Commerce’s growth. “We ask ourselves what [we need] to do now to invest in the short, medium and long term, and then we stay focused so we don’t get too spread out,” Nelson says. “Having that focus and alignment helps force a prioritization of how to balance different-length investments.”

For GWG Life, which launched in 2006, planning for growth isn’t quite as simple. “Our plans are based on the amount of capital we can raise and the cash flows that are coming from our life insurance portfolio, which at our stage of growth has a lot of uncertainty,” says Acheson.

“We have targets we want to achieve over time, but due to the nature of our cash flow, we don’t spend a great deal of time on planning that income,” he says. “We plan a lot more for volume and customer acquisition. Our capital can fluctuate significantly from month to month so we have to stay nimble and take a bit of a longer-term view.”

But regardless of how much you plan, “there are some risks you can manage and some that you can’t,” says Acheson, “and the ones you can’t, you have to get over and move on.”