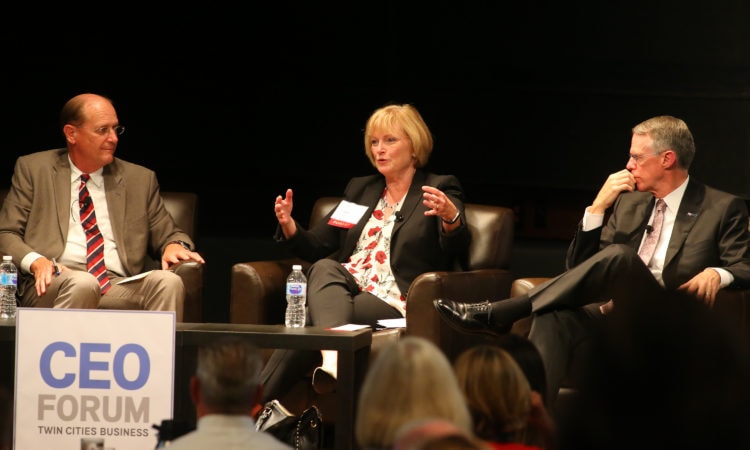 The former CEOs of Delta Air Lines, HealthPartners and U.S. Bancorp weigh in on leading businesses for the long haul.
By Kate LeRette
October 09, 2017

In the past year, Minnesota has seen a wave of top executives step down at large organizations, including UnitedHealth, General Mills and U.S. Bank. Many of those leaders have served a decade or more, leading their companies through a series of opportunities and challenges. They have made a huge impact on both their industries and the communities they serve. While change and new leadership are necessary for any organization to excel, there are lessons that can be learned from the mistakes and successes that each of those leaders encountered.

To learn more about the careers of three well-known CEOs who recently left their organizations, Twin Cities Business hosted its annual CEO Forum on September 19 at the Metropolitan Ballroom in Golden Valley. The forum was moderated by editor in chief Dale Kurschner and sponsored by Robert Half, Protiviti, Concur and Medtronic.

Here are edited excerpts from the forum.

Q: How did you determine when it was the right time to step down?

Richard Anderson: It’s really about when the organization is ready. It’s the right time when the company is financially strong and there are no huge challenges in the business. Transitions are tough, so you want to have significant momentum in the business. [When you look ahead, you ideally want] two years of really good earnings, free cash flow and capital accumulation, so that your successor has the money to invest and the wherewithal to move the strategies forward. For me, it was age, timing in the business and that there were strong successors in the organization that really needed to move up.

Mary Brainerd: I decided a date. If you don’t decide a date in advance and you wait, there’s always a crisis or an opportunity you want to pursue and it’s really easy to say, “Oh well, now is not the right time.” The smart thing to do is just choose a date and then work to make it happen.

Richard Davis: I sat down with the board and I said to them, “In three years I will be at the 10-year mark, and it seems to me that is about the right amount of time for a CEO of a public company.” The second pillar was that my successor was sitting right there, and he was so talented that if I had not telegraphed to him that I wasn’t going to work for another 10 years, we would have lost him.

Q: Richard Anderson, why did you choose to go work for Amtrak?

Anderson: I had never done any sort of public service, so when Wick Moorman called me, [I saw it as] an opportunity to work with him on an important national asset.

Given my transportation background, and that we had been fairly successful at Delta building the market capitalization, I agreed to work without salary as co-CEO and president. It’s interesting and it’s a good opportunity to serve.

Q: What is the importance of companies being involved in the civic and cultural aspects of the communities they serve?

Davis: When you take over as CEO, there is an implied responsibility to step into the community. There is a culture worth protecting in the Twin Cities; it is a remarkable place to live. This is a one-in-a-million environment to live in, for social justice, safety, peace and prosperity. This is a place that I think expects it, provides a backdrop for it and, as success breeds success, it continues to show well because the community is strong and thriving, making you feel like your efforts are worthwhile.

Brainerd: In my involvement with Itasca, the Brooking Institute was looking at what are the best predictors of regional economic success and long-term quality of life, and it boiled down to this: When we all do better, we all do better. I feel that provides both a business reason to step up and be involved in having our community do well on all fronts and, for all of us who do that work, a personal commitment to see our communities succeed and do well.

Q: Given the recent shootings of people of color and other controversial events occurring around the world, how do you lead while dealing with the polarization that exists?

Anderson: You have to pick your battles, but they need to be socially relevant to your employees and your company.

Brainerd: To not acknowledge the things that are [creating hardship] in people’s lives is like creating a cocoon around the workplace, which isn’t very effective or authentic. We’ve had a lot of conversations at HealthPartners about race, diversity and inclusion, and what it means to respect other people’s perspectives. I think it has helped our business performance because we are not afraid to confront real issues.

Davis: After the recent shootings across the country, I mobilized 38 market presidents in the largest cities that we had. I asked them to do something I had never done, which was create listening groups and bring people together. That was a moment that I realized that leadership, maybe for the first time, was more listening than it was leading. There was a lot of understanding to be gained.

Q: Why is it important to create a strong company culture, and how do you build it?

Anderson: It’s about training and professionalism. Give them the tools they need, give them good leadership, which includes holding them accountable, but most importantly, give them a basis of values so that when something happens they know what to do. [In most cases,] you can’t run to a manual; you don’t have time to do that. Your employees have to live on a set of values that are inculcated through training, professionalism and a supervisor who helps them be better at their job.

Davis: We were coming out of a financial crisis and we wanted to stand for something different than everyone else. We asked employees to write down the attributes that we stand for.

After narrowing the responses into key themes, a team came up with five values. From it evolved a mission statement that was entirely built by people who believed it to be true. For us, that has been distinctive. Because they built it from the bottom up, I think it has a higher chance of being believable. Therefore it’s not mine at all, and as I move on, it will evolve.

Q: How do you ensure that the culture you help build remains intact after you leave?

Brainerd: There is a human need to have our own fingerprints on things. The people two generations from now need to be able to wrestle with it and work with it and make it their own. It shouldn’t stay the same, it shouldn’t be untouched. It creates a platform to look at things with fresh eyes.

Anderson: You have to live it everyday. I used to always think, if I work in the B-side hangars at Northwest Airlines on the second shift, what does it sound like to me?

Q: Is Amazon a company that the Twin Cities should attract, and do we want to attract companies with financial incentives?

Davis: The state intends to have no incentives whatsoever for Amazon because they wouldn’t do it for anyone else. It’s not to protect other companies, it’s because it’s not our approach. We are into quality not quantity. We have a unique place with a 3.7 percent unemployment rate.

I do believe in open competition, and I think any community that wants to attract them and has the assets should. With Amazon [part of] everyone’s business, I think the bigger question is whether that’s safe and good for our economy.

Anderson: In an open society there is going to be competition for jobs. There is a genre of businesses that companies use to help evaluate where they should locate a headquarters.

Whether it’s Amazon or FoxConn in Wisconsin, public policy makers can do the arithmetic and determine whether it makes sense or not. I think there is a reality that if you want to play in the world of recruiting companies, you have to put incentives on the table.

Minnesota doesn’t do that really well, but I think Minnesota should focus on the great companies it has here and what it has to do to continue to expand.

I think that’s going to be a better economic development strategy than trying to compete against Texas and Georgia just because of climate and taxes.

Q:  What advice would you give to the future generation of leaders?

Davis: I don’t fit the mold. I never wanted to be a CEO; it was never a goal.  So what I say to my kids is, “Promise you will pick a direction but not a goal.”

I said yes to every opportunity and I never had a pre-conceived notion that it was either lateral or that it was too dirty of a job.

You have to be open to the opportunities when they come along. And if you want to be promoted, don’t keep it a secret. One of the most important things you can do is let your boss and your boss’s boss know what your intentions are.

Lastly, more decisions are made on trust and character than on any number or statistic. And maybe the best thing you learn as a CEO is where that trust is best placed. You might need to be wrong a few times to get it right, but that is how business gets done.