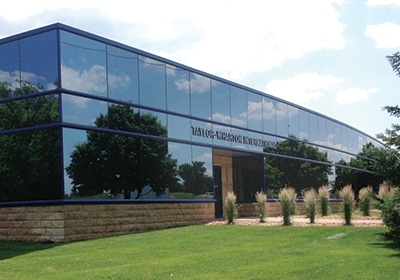 Proximity to our runways was key in the company’s decision to relocate its corporate headquarters here.
By Adam Wahlberg
February 01, 2014

It’s sort of standard chatter around here to complain about our airport. But don’t tell that to Eric Rottier, CEO of Taylor-Wharton International, a company that makes valves and equipment to store pressurized gases and liquids that used to have a Pennsylvania address. The man loves MSP airport.

“Oh yeah, it’s a world-class airport, one of the best in the country, and for us, being out in Minnetonka, we’re just 15 minutes away,” he says. “That wasn’t the case in Mechanicsburg.”

Ah yes, Mechanicsburg. Surely it’s a pleasant town, but to hear Rottier explain it, it was Nowheresville.

“Well, Mechanicsburg is next to Harrisburg, and Harrisburg went bankrupt and was running a 15 percent unemployment rate. So the business culture, the dynamics, the fact that there’s only a small commuter airport, it just wasn’t a positive feeling,” he says.

He did feel positive about Minnesota, not least because he resides here himself, in Shorewood. He knows we’re about more than snowmobile suits and high taxes. He knows the sales pitch. “Minnesota offers a highly educated workforce, solid work ethics, excellent universities, excellent health care, quality of life, and it’s easy to recruit talent,” he says.

One other city was in play for a while: Mobile, Alabama. That’s where Taylor-Wharton’s big operation is, so moving there with its corporate headquarters would have had a certain logic to it. “We wondered about consolidating our corporate office with the manufacturing factory. But then you’d be a factory. Plus in Mobile it’s two flights minimum from almost anywhere,” he says.

The airport again. The key ingredient.

Once Rottier had set his sights on Minnesota, he went to work finding the building, The company got a great deal on 11,000 square feet at Rowland Pond I in Minnetonka, taking advantage of a soft market on the 494 belt at the time. “The building was gutted and we did a custom build-out and still saved significant money over what we were paying in Mechanicsburg. It’s a complete upgrade.”

The physical relocation didn’t take long at all. “We took about three months to assess the variables and make the decision, and then about five months to do the custom build-out, from architectural brainstorming to completion. What happened was our landlord had other empty space so they provided us with three temporary offices while they were building out the new space, and that allowed us to begin hiring while our space was being completed. From decision point to move-in was probably seven months,” he says.

But what did take some time was making sure existing staff—about 40 jobs came with him—were comfortably on-boarded. “That took another 10 months to fully transfer every position over,” he says.

Since then he’s been at work adding staff, and he’s been finding the employee base deep.

“We recruit in the western suburbs, northern suburbs; it’s very easy to get lots of talented candidates in front of us, and they’re all local people, so we weren’t paying relocation packages,” he says. “We hired a lot of people from Cargill and UnitedHealth, people with bigger company exposure and a lot of experience. I was able to bring in talent that could improve the way we did things in Mechanicsburg, and then be strong enough to double or triple the size of the company. It gives you a complete reset.”

Rottier then underlines the people part.

“A lot of people will look at the pure cost of a move—the cost of rent or equipment—and those are certainly important data points, but they didn’t factor much into our process. It was about the hires. We want to hire team players, people who can contribute two or three times their costs. A 10 or 20 percent cost differential is relevant. Having access to talent is our biggest factor,” he says

And then there’s that airport. The word “international” is in Taylor-Wharton International for a reason. It operates three complementary businesses from 16 manufacturing, sales, warehouse and service facilities in six countries on four continents, and markets its products in more than 80 countries. It has more than $200 million in annual revenue. Executives need to get places.

“Here I can be in Europe in eight hours, Tokyo in 12. That’s of huge value to us,” Rottier says.

And being out of Mechanicsburg.