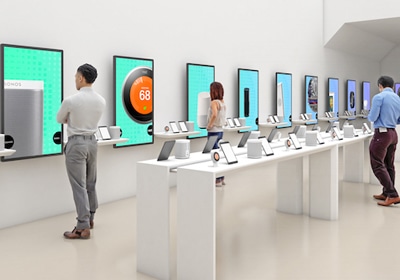 Target has temporarily closed its experimental retail venture Open House in effort to renovate the San Francisco shop to include new features, such as an early-stage products showroom dubbed “The Garage.”

In the year and a half since it launched, Open House has been the Minneapolis-based retailer’s hub for all things Internet of Things (IOT). New tech products geared toward the home have been its focus—think smartphone-connected light bulbs and outlets that can add voice control functionality to your lamps and entertainment system.

Target spokeswoman Jenna Reck said the retail concept has already proven fruitful for the company. “An example we like to use is called Tile,” she noted. Target began selling Tile, a small tracking device used to find misplaced items, early on at Open House.

“It was the top seller at Open House every single day,” Reck said. “So last holiday season we brought Tile into all stores across the country and it became one of the top-selling electronics products in Target stores.”

Strong demand at Target’s standalone Open House location has sometimes led to the products emergence into Target chain stores. “For many startups, achieving national distribution through a retailer like Target is the cornerstone of success,” said Dave Mandelbrot, chief operating officer at Indigogo. (Last November, the popular crowdfunding site announced a partnership deal with Target that would bring more of its online-exclusive items to Open House’s shelves.)

Some of Open House’s “part retail space, part learning lab” concept has even bled into Target locations, such as the Ridgedale store in Minnetonka.

Feedback from tech entrepreneurs visiting the San Francisco-based Open House location, as well as input from more than 150,000 shoppers, led Target to close it down for construction. The site is expected to reopen on February 10.

Target said changes to Open House would include the addition of The Garage, a retail space for early-stage products that will preview 16 new items each month. Displays will also become more personalized as shoppers will first be asked a series of questions that will dictate their experience within a room of IOT products. New event spaces and product testing areas are also on the list of Open House add-ons.

“We built Open House as an iterative space that is all about research and development around the connected consumer,” said Gene Han, vice president of consumer IOT at Target. “Now, with this feedback, we’ll renovate Open House in ways that will help better engage, educate and excite guests and the IOT community.”