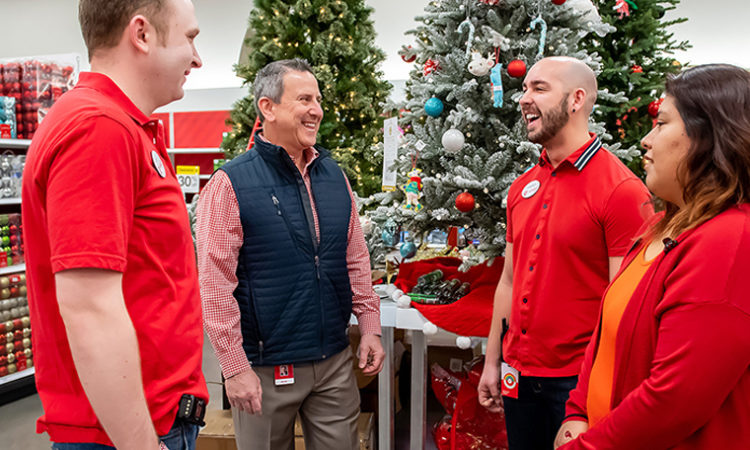 Target CEO Brian Cornell (middle) gathered with Target employees in a store during the holiday season. (Photo courtesy of: Target).

The retailer’s November and December sales grew as the average shopper spent more than a year ago during each trip. Target’s digital sales also saw a 29 percent boost.
By Amanda Ostuni
January 10, 2019

Target’s sales over the November and December holiday stretch climbed 5.7 percent over the same period a year ago, the Minneapolis-based retailer announced Thursday.

Likewise, its digital sales over the two-month period jumped 29 percent year-over-year. The positive performance was driven by increased foot traffic and a slight rise in the average amount each shopper spent.

“We are very pleased with Target’s holiday season performance,” said Target chairman and CEO Brian Cornell. “This performance demonstrates the benefit of placing our stores at the center of every way we serve our guests, including both in-store shopping and digital fulfillment.”

With the rise in sales came a rise in shoppers avoiding checkout lines. Target’s in-store pickup service, as well as its park-and-go Drive Up offering, accounted for a quarter of its sales over November and December.

Target said its holiday season growth is a fair representative of what its expecting to report for both the fourth quarter and fiscal year. While the data is not yet finalized, the company is anticipating a full-year digital sales increase of more than 25 percent year-over-year. For entire fourth quarter, its expecting growth of about 5 percent.

Target’s brick and mortar and digital turnaround has been spearheaded by Cornell. When Cornell talked to TCB in late summer 2017, he was entering his fourth year on the job. Overall sales had flatlined and the company’s 2016 full-year sales had fallen 5.8 percent from the year before – largely due to the sale of its pharmacies to CVS.

Cornell had turned Target’s mission toward being more responsive to shoppers through increased localization and personalization both in stores and online. With that in mind, Target revealed plans in early 2017 for $7 billion to be invested into updating stores over the next three years.

“We are on track to deliver Target’s strongest full-year comparable sales growth since 2005,” said Cornell. “In 2019, we expect to build on this momentum as we gain further scale in our fulfillment capabilities and deliver profitable growth throughout the year.”

Meanwhile, Target is also shaking up its leadership team.

The company announced Thursday that its CFO, Cathy Smith, is retiring. She will remain in place until her successor is named, then take on an advisor role through May 2020 to help with the transition.

“On behalf of our Board of Directors and Target’s entire team, I want to thank Cathy for her leadership and valuable contributions since joining the Company in 2015,” said Cornell. “Cathy’s deep expertise and leadership helped usher in strategic change for Target and positioned us for sustainable, long-term growth.”