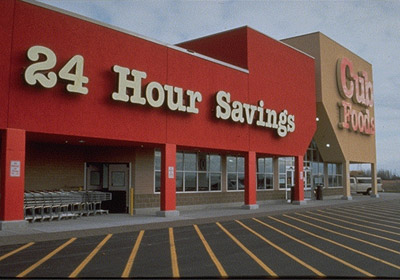 Although the grocery retailer’s revenue fell slightly, its profits jumped from $16 million to $31 million in its fiscal third quarter.
January 19, 2014

Supervalu almost doubled its profits during its third quarter, nearly a year after selling a large chunk of its grocery business in a $3.3 billion deal.

Although revenue dipped slightly, the Eden Prairie-based grocery retailer saw a huge jump in earnings, due largely to expense-cutting efforts and increased sales at its discount grocery chain Save-A-Lot.

Supervalu announced that net earnings for the third quarter, which ended November 30, totaled $31 million, or $0.12 per share, up 94 percent from $16 million, or $0.08 per share, during the same period in 2012. Third-quarter earnings per share matched what analysts polled by Thomson Reuters had expected.

Revenue, meanwhile, totaled $4.01 billion, down 1 percent from $4.05 billion in the third quarter of 2012. Third-quarter revenue fell short of analysts’ projections of $4.05 billion.

Overall retail food sales dropped 2.6 percent for Supervalu, but its Save-A-Lot chain saw sales increase by 2.6 percent compared to the same period in 2012.

“Although we still have work to do to improve our sales trajectory, I am pleased with the accomplishments we made within our operations this quarter and look forward to completing my first fiscal year leading this company,” CEO Sam Duncan said in a statement.

Supervalu’s deal to sell five grocery chains was first announced in January, and it led to the appointment of Duncan as CEO in February; he replaced Wayne Sales. As part of the deal, the company sold 877 Albertsons, Acme, Jewel-Osco, Shaw’s, and Star Market stores, as well as the associated Osco and Sav-On in-store pharmacies, to an investor consortium led by New York-based private investment firm Cerberus Capital Management L.P.