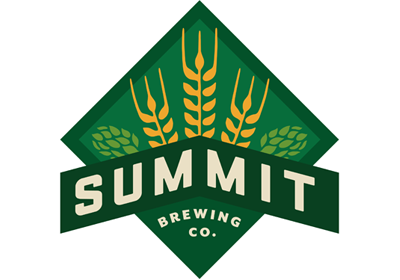 Summit will introduce a series of limited-run beers that highlight new brewing ingredients; meanwhile, the company updated its logo for the first time since 1999.
March 03, 2013

Summit Brewing Company, which is in the midst of a $6 million facility expansion and is on track for another year of production growth, unveiled a new look and a new product line on Thursday.

Summit’s rebranding will debut during the Minnesota Twins’ season opener at Target Field on April 1, where it will appear throughout the redesigned Summit Townball Tavern.

The company’s new logo will debut in liquor stores April 15 with the release of Summit’s new Meridian Session Ale. Meridian is the first beer from Summit’s new “Union Series,” which will feature limited-run beers that highlight “new raw materials and ingredients appearing on the brewing scene.”

Meridian, for example, will use the Concerto pale malt, an ingredient from the United Kingdom that Summit Marketing Coordinator Carey Matthews described as “a new rising star there.” The beer will also feature Meridian hops, a new variety recently discovered in Oregon.

Unlike Summit’s Unchained Series, which allows individual brewers to explore a style of their choice and is released three times a year, the Union Series will not operate on a set schedule. The number of beers released each year will be dictated by the availability of new products that the company’s brewers choose to explore, Matthews said.

As part of its rebranding, Summit will also redesign the packaging for its seven year-round and four seasonal beers. The redesign for those products will roll out in the fall, and “everything is going to look new,” Matthews said.

Summit’s new logo was designed by Minneapolis-based Duffy & Partners. It is meant to represent “an evolution of Summit’s past two logos,” the company said.

“We redesigned our original logo in 1999 after Summit’s new brewery opened, and with the expansion of the brewery 14 years later, we felt it was again time to update our look,” founder Mark Stutrud said in a statement. “Innovation is part of our DNA, and we think this change signals that commitment while also honoring the community that built this company.”

Summit has seen consistent growth in recent years and is nearing capacity at its St. Paul brewery. In November, the company expedited plans for a $6 million expansion, which will double capacity. That upgrade is expected to be completed in June.

Summit brewed 112,451 barrels in 2012, up from about 104,535 the previous year, making it the state’s second-largest brewery. It expects to boost production by between 8 and 12 percent this year, according to Matthews.

Last fall, Summit opened a “taproom” at its brewery, taking advantage of a change in state law that allows brewers to sell pints of beer at their breweries. The taproom is open Friday evenings and has been full each Friday since opening, Matthews said. A number of other taprooms have been popping up around the Twin Cities, too.